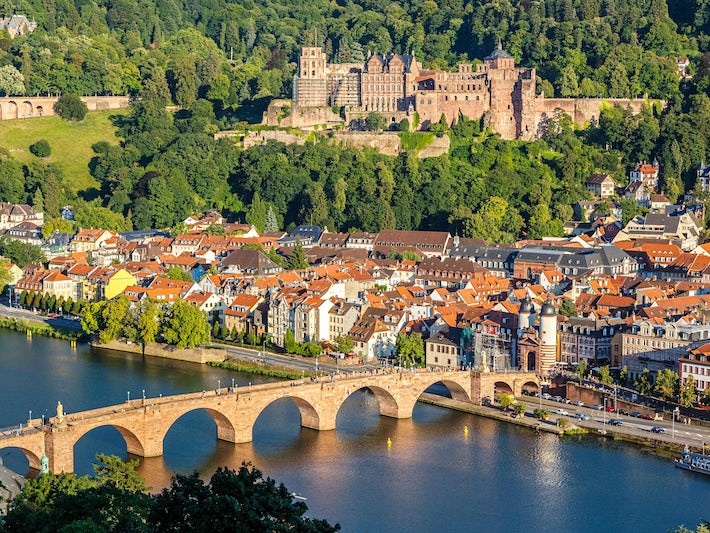 Find Things to Do in Heidelberg on Viator

Popular Things to Do in Heidelberg

Food and Drink in Heidelberg

With its population of hungry (and thirsty) students and a consistent tourist throng to feed, Heidelberg has no shortage of restaurants, cafes and bars. Eateries in the Altstadt along the Hauptstrasse can be very touristy, but there are plenty of solid options, nonetheless. German food has a reputation for being hearty and somewhat stodgy, with an emphasis on meat (Wurst, or sausages, in particular), potatoes (Germany is one of the world's top potato-consuming countries) and bread. There is considerable regional variation, with the culinary influences of the country's international neighbors reflected in local dishes. Thus, in the Rhineland region, you'll pick up hints of Belgium and the Netherlands in dishes like Halver Hahn (a giant slab of Dutch gouda with a Roggelchen, or rye roll) and Dicke Bohnen mit Speck (boiled white beans with hefty boiled bacon slices on top).

Budget to Mid-Range: If you're looking for traditional German food, try Weinstube Schnitzelbank, a tavern tucked around the corner from the Hauptstrasse. Schnitzelbank has a long history with wine -- a cooperage and wine shop was founded in 1882 -- but the best thing about this tavern is definitely the food. With a focus on local produce and fresh ingredients, the food is simple and satisfying German fare. If you're hungry, try the "Halb und Halb" (or half and half) for a sampling of German dumplings and bratwurst with sauerkraut. Lighter fare, including soups and salads, is also available. Wine is available by the glass or bottle. (Bauamtsgasse 7; +49 6221 21189)

Beer: Vetter's Alt Heidelberger Brauhaus, at the east end of the Hauptstrasse, is a great spot to try locally brewed German beer; they brew their own on site. They serve food, too -- typical German pub grub -- but the reason to visit is definitely the beer. Try the dark Hefeweizen if you like wheat beers; also on tap are Marzen, Maibock, Helles and Radler, a half lemonade and half beer concoction that's refreshing on a warm summer day. If you're there around Christmas, the Weihnachtsbock Frisch is the seasonal favorite. (Steingasse 9 - Im Schoneck; +49 6221-165850)

High-End: If you want a high-quality meal with nice views overlooking the Old Town, and you aren't concerned about budget, award-winning chef Manfred Schwarz's eponymous Schwarz Das Restaurant is the place. Five- and seven-course combinations of continental-style cuisine are available for dinner or you can order a la carte. There's also a wine-pairing option, which costs extra. The menu changes frequently, but some appetite-whetting examples are: scallop and saffron truffle, goose liver and apple brioche or grilled prime rib with orange-almond ragout and stuffed artichoke. And don't forget the chocolate and verbena pears for dessert. You'll need to book in advance, but for a slightly less formal (and much less expensive) experience, two- or three-course set menus are available at lunch. (Kurfursten-Anlage 60; +49 6221-757030)

The most obvious and imposing of Heidelberg's historic buildings, Heidelberg Castle, is the beautiful ruin that's the center of tourist activity in the city. Fortifications of one kind or another have existed in the general vicinity of the castle since the 13th century. Within the castle walls, however, is a collection of buildings of varying architectural styles and dating from different time periods arranged around a central courtyard. The oldest building onsite -- a Gothic-era royal residence -- dates to the rule of Ruprecht III, around 1400. Three additional Renaissance-era buildings were added during the 16th and early 17th centuries, and the King's Hall was a neo-Gothic addition built in 1934. Attractions on the castle grounds include the world's largest wine barrel, known as the Heidelberg Tun, and the quirky but interesting German Apothecary Museum housing an authentic pharmacy and laboratory as well as the instruments, manuscripts and ingredients used in German pharmaceutical medicine between the 17th and 19th centuries. Tickets give access to the courtyard, Heidelberg Tun and Apothecary Museum; tours of the interior require an additional fee. Tours are in English daily, when demand is sufficient. (Daily open hours: Courtyard 8:00 a.m. to 6:00 p.m., last entry 5:30 p.m.; Heidelberg Tun, 8:00 a.m. to 6 p.m., last entry 5:50 p.m.; German Apothecary Museum: 10 a.m. to 5:30 p.m., last entry 5:10 p.m.)

In summer, the castle serves as an open-air venue for opera, theater performances and classical music concerts, as well as a series of impressive fireworks displays to commemorate the three times the castle went up in flames (1689, 1693 and 1764). And in winter, the castle grounds host stalls for the town's Christmas markets in the surrounding, early 17th-century gardens from December 6 to 18.

Konigstuhl and Heidelberger Bergbahn: The castle is set partway up the Konigstuhl (King's seat), a hill rising 1,900 feet above the river valley and forming a topographical boundary to the city's southeast. On the very western edge of the Odenwald, a low, forested mountain range in southwest Germany, the summit of the Konigstuhl is best reached by way of the Heidelberger Bergbahn (Heidelberg Mountain Railway), a tram railway in two sections. The lower section of the railway has stops at the Kornmarkt at the base of the Konigstuhl in Heidelberg's Old Town, at Heidelberg Castle and at Molkenkur, farther up the Konigstuhl from the castle. At Molkenkur, the upper section of the railway runs the final 850 vertical feet to the summit for a spectacular view of the city, the Neckar River and the Rhine Valley to the west. A castle ticket on the railway gets you a return trip from the Kornmarkt to the castle as well as paying your entrance fee into the castle grounds. The trams run from 9 a.m. to about 5:30 p.m. every 10 minutes on the lower section and every 20 minutes on the upper section. One tip: Don't miss the final departure from the Konigstuhl station, as it's a very steep, 90-minute walk down.

The quaint Altstadt (Old Town) in Heidelberg runs east-west along the Neckar River and is linked by the Hauptstrasse (main street), purportedly Germany's longest pedestrianized street at just about one mile. The Altstadt roughly spans the territory between the Old Bridge (also known as the Altenbrucke or Karl-Theodor Bridge) on the eastern side and the New Bridge (or Theodor Heuss Brucke) to the west. A bridge -- nine bridges, in fact -- has stood on the site of the current Old Bridge since 1284. One notable feature of the bridge is its brass statue of a monkey holding a mirror, which is meant as a lesson in humility for visitors. The statue was installed in the late 1970's but has roots in a relief on an earlier bridge that conveyed the same message.

If you just can't get enough of the stunning castle and old city and fancy seeing them from a different angle (and provided you have the time), head across to the Neckar River's north bank and soak in the wonderful views as you wander along the two-kilometer-long Philosophenweg (Philosophers' Walk). The Philosophers' Walk was traditionally used by Heidelberg's philosophers and university professors as a place for discussion, contemplation and inspiration. It is quite steep in sections, so take care.

The Heiligenberg (Mountain of Saints), around which the Philosophenweg winds, has been used over the centuries as a ceremonial site by several groups as ancient as the Romans and as recent as the Nazis. And, again, beautiful views accompany your trip to the various points of historical interest, which include the 4th-century B.C. remains of a Celtic fort, the 11th-century ruins of the Catholic Monastery of St. Michael and the Thingstatte, a creepy Nazi-era amphitheater. The Thingstatte was constructed from 1934 to 1936 under the direction of Joseph Goebbels, the Nazi minister of propaganda, who celebrated its completion by speaking there in front of 20,000 people.

Among Heidelberg's numerous historic churches, probably the best known and most visited is the Church of the Holy Spirit (Heiliggeistkirche). Situated at the west end of the Marktplatz in the Old Town, the church was built on the site of at least two earlier churches, and the foundations were laid in 1398 during the late Gothic period. The church once housed the Biblioteca Palatina, most of which was taken during the Thirty Years' War by Prince-Elector Maximilian I of the Holy Roman Empire, and still resides in the Vatican Library in Rome. If you want to pay the small fee to climb the 200 steps spiraling up to the top of the steeple, you'll be treated to another great view of Heidelberg.

For a bit of fun with a much less expansive view, head west down the Hauptstrasse to the Student Jail (Studentenkarzer), a museum found down a side road that leads to the University Square (Universitatsplatz). The student jail was used by the Old Heidelberg University -- another nice 14th-century site that features its own museum -- between 1778 and 1914 to house students who broke their specific set of laws. Students who wound up in the clink would have been, for example, those who broke the peace (usually after imbibing at a local watering hole). Through the years, incarcerated students made good use of their time inside by voicing their opinions and expressing their ideas in the form of entertaining written and pictorial graffiti. (Augustinergasse 2; tel.: 06221 543-554; Open April to September, Tuesday to Sunday 10 a.m. to 6 p.m.; October, Tuesday to Sunday 10 a.m. to 4 p.m.; November to March, Tuesday to Saturday 10 a.m. to 4 p.m.)