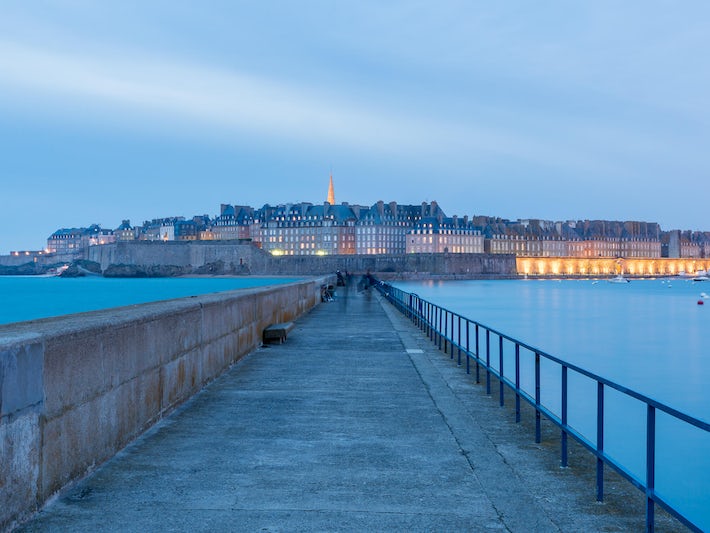 Find Things to Do in Saint-Malo on Viator

Popular Things to Do in Saint-Malo

Food and Drink in Saint-Malo

A visit to Saint-Malo isn't complete without a stop at a creperie. Options include both galettes (which are made of buckwheat flour and topped with savory items such as eggs, ham and cheese) and crepes (made of regular wheat flour and featuring powdered sugar, chocolate, caramel or other sweets). Saint-Malo also has many good seafood restaurants, where local oysters, fish and mussels are on the menu. Accompany your meal with a glass of cider, a popular alcoholic drink in the Brittany region.

Enjoy sea views along with an indulgent lunch at Le Cap-Horn, where the fixed-price menus include options like oysters from nearby Cancale, roasted fillet of duckling and pan-seared fillet of bass. (Note: Vegetarians have very few choices here.) It's an excellent option for seafood lovers and those celebrating special occasions. (100 Boulevard Hebert, +33 (0)2 99 40 75 40)

Le Tourne-Pierre serves up a delicious menu of Breton favorites, including galettes, crepes, mussels and oysters. Along with the food, diners particularly appreciate the friendly staff; the owner has been known to invite patrons to watch how crepes are made. (4 rue Jacques Cartier, +33 (0)2 99 40 86 95)

You're in France, so why not indulge? Autour du Beurre is the perfect place to do it. Located next to the Maison du Beurre (or House of Butter) is this little bistro, where you can sample seven or eight flavors of butter, each more indulgent than the next. Just remember to leave room for the main dish (which might include squid or pork shoulder) and, of course, dessert and cheese. (7 rue de l'Orme, +33 (0)2 23 18 25 81)

Before or after your visit to the cathedral, take time to stop at the nearby La Bergamote tea room for a light lunch, pastry or merely a cup of tea from its wide selection. Lunch options include galettes, salads and quiches. (3 place Jean de Chatillon, +33 (0)2 99 40 28 14)

France might not be the first place that comes to mind when you think of tapas, but you'll think differently after a visit to O Tapas Breton. Enjoy small portions of Cancale oysters, smoked or marinated fish, and charcuterie, presented on wooden cutting boards and paired with selections from the well-stocked cider cellar. (4 rue de l'Orme, +33 (0)2 99 48 19 85; open daily from 10:30 a.m., closed Wednesdays except in July and August)

Walk along the well-preserved ramparts that surround the oldest section of Saint-Malo to enjoy panoramic views of the medieval city and the English Channel. Keep an eye out for statues of famous historical figures such as Jacques Cartier (an explorer from the Brittany region who claimed Canada for France) and Bertrand-Francois Mahe de La Bourdonnais (a naval officer for the French East India Company). The entire circuit is a little over a mile, with several sets of stairs back to street level.

In the center of the medieval city is Saint-Vincent Cathedral, which dates to the 12th century but was significantly damaged in World War II. As cathedrals go, it's rather dark and plain, but the rose window in the front is a stunner. Keep an eye out for the tomb of Jacques Cartier.

The 15th-century Saint-Malo castle houses the Musee d'histoire de la Ville, or Museum of Local History. Though captions are in French, you can pick up an English-language leaflet to learn about the collection, which includes everything from pirate's chests and scale models of ships to paintings and sculptures by local artists.

The Demeure de Corsaire, or Privateer's House, offers a fascinating look at the life of the ship owners who made Saint-Malo wealthy in the 18th century. This house was used primarily for business (many wealthy privateers had more spacious homes for their families in the countryside), and it's fun to learn about the different purposes served by each room -- like the opulent lounge where the merchant would welcome potential buyers and the smaller, low-ceilinged room for top-secret negotiations.

Take a walk at low tide to the islands of Grand Be and Petit Be for views of the Saint-Malo skyline and to visit a fort that once protected the city. (Check whether the tide is coming in or going out before visiting.) The 18th-century writer and diplomat Chateaubriand (the famous beef dish was created for him) is buried on Grand Be, the larger island, while the 17th-century Fort du Petit Be is located on the smaller island.

Saint-Malo is a popular gateway for visits to Mont Saint-Michel, a medieval village perched on a small, rocky island surrounded by the highest tides in Europe. The prime attraction there is the Benedictine abbey at the peak of the island, which dates to the 13th century, but you'll also want to wander along the Grande Rue, or Main Street. There, you'll find shops, restaurants and a handful of museums with information on the history and construction of Mont Saint-Michel, as well as its tides and ecology. The village is about a 45-minute drive from Saint-Malo. If you're not up for climbing up steep streets and steps, you can still get excellent photos from the bridge leading to the village.

Indulge yourself with a massage, seaweed wrap, facial or thalassotherapy treatment at the luxurious Grand Hotel des Thermes. Book treatments a la carte, or choose from a wide selection of packages. Reservations are recommended.

Dinan is considered by many to be the prettiest medieval village in Brittany. Set on a hillside overlooking the Rance River, it's a town built for wandering, with its sturdy ramparts, picturesque gardens and neat little half-timbered houses dating back many centuries. Most cruise lines offer excursions to Dinan, but you can also take a local bus service from Place Saint-Vincent; the trip is less than an hour.

In Dinard, you can ooh and ahh over the fancy seafront villas built by American and British vacationers in the 19th century. Hit the beach or stroll along the water via the Promenade Clair de Lune. Dinard is just a 10-minute boat ride from Saint-Malo via Compagnie Corsaire.

Take a 50-minute train ride to Rennes, the capital of Brittany. On a warm, sunny day, wander through the expansive Thabor Gardens -- don't miss the magnificent rose garden -- and join the locals on a bench overlooking the fountains. Alternatively, explore the historic core of the city, keeping an eye out for timber-framed houses dating to the 15th through 17th centuries. If you're in need of a little culture, the Fine Arts Museum and the Museum of Brittany are well worth a visit. Check RailEurope.com for train tickets and prices.