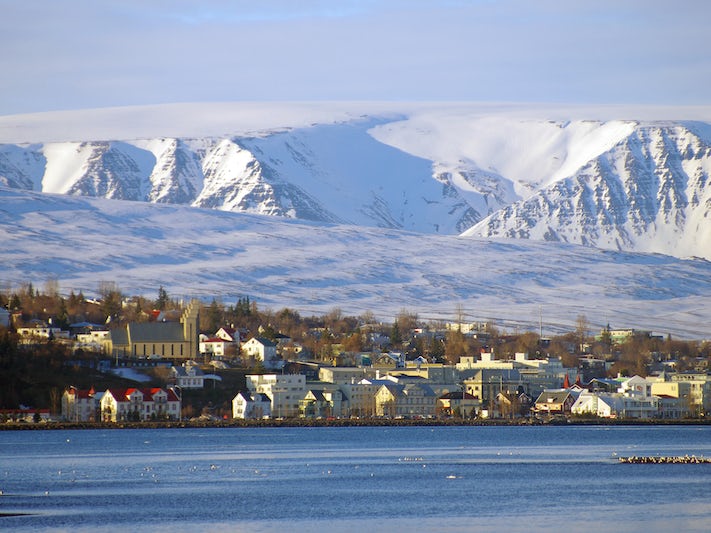 Find Things to Do in Akureyri on Viator

Popular Things to Do in Akureyri

Food and Drink in Akureyri

Prepare yourself for sticker shock if you eat off the ship. Iceland's food is notoriously expensive. Seafood and lamb are staples in this agricultural land surrounded by sea, and the soups made from these ingredients make a particularly satisfying (and warming) lunch, especially when served with hunks of delicious brown bread. If you're an adventurous eater, you'll want to seek out hakari, fermented (rotten) shark that's often served with brennivin, a clear spirit. If the ammonia taste and smell of the shark don't make you gag, the strong licorice flavor of the drink will.

Simstooin Cafe: This spot is located on Hafnarstaeti, Akureyri's main pedestrian shopping street. With a fish of the day and a raw food of the day, it's a good choice for those with food allergies. Plus, it has free Wi-Fi. (Hafnarstraeti 102; open 9a.m. to 11:30 p.m. daily)

Rub 23: Across the street from the church, Rub 23 has a trendy mix of seafood and sushi (including minke whale, a somewhat controversial dish). The restaurant is tops on TripAdvisor and features an intriguing "sushi pizza" made with Arctic char. (Kaupvangsstraeti 6; lunch 11:30 a.m. to 2 p.m. weekdays)

Strikid: If you're looking for a restaurant with a view, Strikid offers heartier meals than the cafes on Hafnarstaeti. Icelandic specialties include langoustines, pan-fried cod, slow-cooked lamb shank and -- occasionally -- fermented shark. (Skipagata 14; open 11:30 a.m. to 10 p.m. daily)

Church of Akureyi: Perched on a hill overlooking the harbor, the Church of Akureyri (official name: Akureyrarkirkja) is an Art Deco stunner of a building. Designed by Icelandic state architect Gudjon Samuelsson (who also built Hallgrimskirkja in Reykjavik), the Lutheran church has a 3,200-pipe organ and a ship suspended from the ceiling that hearkens to the Nordic tradition of asking protection for loved ones at sea. (Free admission; open daily, hours vary)

Godafoss: Iceland is a waterfall-lover's dream, and one of its most historically significant, Godafoss, is only about a half hour from Akureyri. Shaped in a classical horseshoe spanning nearly 100 feet, the falls are 39 feet high and can be viewed from lava rocks nearby. The name, translated as Waterfall of the Gods, comes from the year 1000, when Iceland converted from paganism to Christianity. Legend has it that the lawspeaker (the Vikings' elected leader of Parliament) at the time, a pagan priest named Thorgeir Thorkelsson, threw his idols into the waterfall after he made the decision to convert.

Lake Myvatn: The outdoor activities around Lake Myvatn, about 60 miles from Akureyri, could easily fill a day. Highlights include the sulfur-smelling mud pots at Hverir, easy walking trails through craggy lava formations at the folkloric troll haven Dimmuborgir, a hike up the Hverfjall crater for the hardy, or a visit to steaming lava near Krafla caldera, a volcano that has erupted 29 times in recorded history. Finish your visit with a soak at the Myvatn Nature Baths, geothermal springs with a soaking lagoon and several steam rooms. (Open 9 a.m. to midnight June 1 to August 31 and noon to 10 p.m. September 1 to May 31; $30 per person, June 1 to August 31; $26 per person in the offseason; swimsuits, towels and bathrobes can be rented; massage services available with advance reservation)

Game of Thrones Tours: The desolate landscape around Lake Myvatn has drawn filmmakers over the years; recent flicks include the Russell Crowe movie "Noah" and the Tom Cruise action picture "Oblivion." But it's the critically acclaimed and immensely popular HBO series "Game of Thrones" that draws tourists. Lake Myvatn and its environs serve as the stand-in for the wintery "beyond the wall" scenes in Season 2. Naturally, tour operators have taken advantage of this, and you'll find daylong Game of Thrones tours leaving from Akureyri. Your ticket usually includes roundtrip transportation to the remote locations by a super Jeep (jacked up to traverse rough terrain) and often a stop at the Myvatn Nature Baths.

Whale-watching: The North Atlantic is a haven for a multitude of whale species, and seeking out bottlenose, humpback or minke whales is a popular excursion. You can either take a tour directly from Akureyri or drive yourself to Husavik, considered the "whale watching capital of Europe" (about 90 minutes away). If you go, save time for the excellent Husavik Whale Museum. (Open 8:30 a.m. to 6:30 p.m. daily June to August and 9 a.m. to 4 p.m. May and September)

Horseback Riding: As you traverse the countryside, you'll see Icelandic horses, notably smaller than most breeds, grazing by the side of the road. But don't mistake their size for a lack of power. In addition to the regular gaits all horses know, Icelandic horses are born with their own speedy version known as the toit, making a horseback riding expedition a must for equine-lovers. Numerous operators run excursions in the Akureyri area; Skjaldarvik, a few miles north of town, has 90-minute rides daily at 10 a.m., 2 p.m. and 5 p.m. (with free access to a hot tub after your excursion).

Flightseeing: If you have the budget, Akureyri is a good base for flightseeing over some of Iceland's most unusual terrain. In fall 2014, companies such as Iceland Travel, Saga Tours and Nonni Travel were offering flights over the raging Holuhraun lava field from the Bardabunga volcano. Even if that cools down, you'll be able to see dramatic landscape such as the Askja caldera, Lake Myvatn and Vatnajokull, the monster glacier that makes up 10 percent of the island. Another option is a flight to Grimsey Island, which is Iceland's only point north of the Arctic Circle. You can view puffins and icebergs, and you'll receive a certificate proving northern exposure.

Motorcycle Museum of Iceland: If the rain is too much for you, Akureyri offers a host of museums and attractions, most within walking distance of the port. If you spend your weekends riding the road, you'll appreciate the Motorcycle Museum of Iceland, which dives into the history of hogs on the island, in a building that was especially designed to house the bikes (Krokeyri 2; open 10 a.m. to 5 p.m. daily June 1 to August 31)