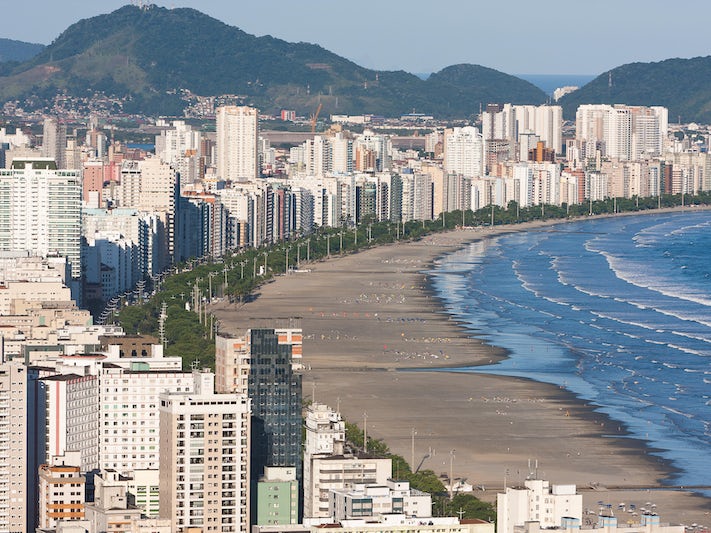 Find Things to Do in Santos (Sao Paulo) on Viator

Popular Things to Do in Santos (Sao Paulo)

Santos restaurants offer seafood galore, and because this is Brazil, barbecued meat is a popular staple.

Tasca do Porto in Old Town and within walking distance of the Coffee Museum, serves up Portuguese-influenced Brazilian specialties in an authentic atmosphere. Try the arroz de mariscos, rice with shrimp, squid and shellfish. Expect live music and servers in traditional dress. (Rua XV de Novembro 112)

Drink the caipirinha, Brazil's national cocktail, in the region where it originated. Made with cachaca (hard liquor made from sugar cane), sugar and lime, the cocktail is said to have been invented in 1918 as a popular remedy for victims of the Spanish flu, which was spreading across the world that year. Nearly every bar and restaurant in Santos serves the sweet drink.

Santos is home to the longest beachfront garden in the world, spanning 5,335 meters. This is a great place to hit the sand, with a chance to enjoy the flowers and plants when the sun gets to be too much. There are miles of bicycle lanes throughout the park and you can find bike rentals nearby.

Guaraja is a nearby town with 11 miles of pristine beaches that are a favorite with locals and visitors alike. At least one beach (Tombo) has been honored with the Blue Flag seal for environmental purity. There are plenty of hotels, restaurants and changing facilities along the beaches. You can take a taxi or a boat from the nearby ferry terminal.

Coffee Museum: Because Santos is synonymous with the coffee trade, no trip would be complete without a visit there. The museum is housed in the beautiful Bolsa Official de Cafe, the former coffee exchange. With marble floors and opulent chairs and tables made from jacaranda, a local noble wood, one can just imagine the trading that took place there until 1950. The rest of the museum is filled with both art and relics describing the process of farming coffee and the impact of the coffee trade on local culture. Don't forget to visit the museum's cafe to try the brew for yourself; try the "Brazilian cappuccino" made with chocolate (Rua XV de Novembro 95; open Tuesday to Saturday 9 a.m. to 5 p.m. and Sunday 10 a.m. to 5 p.m.)

Vila Belmiro Stadium: While Santos is known for coffee, it is probably even more famous worldwide as the home of perhaps the greatest soccer player to walk the Earth -- Pele. The football legend played for the Santos Football Club for 18 years. At Vila Belmiro Stadium, built in 1916 and seating 20,000, you can see the field where Pele made history as well as a museum dedicated to the star, his team and the impact he had on the world (Pele is credited with stopping a war in Zaire -- now Democratic Republic of Congo -- in 1967 because participants wanted to see him play in an African tournament). (Rua Princesa Isabel)

The Santos Municipal Orchidarium and Zoological Park: The park recreates Brazil's Atlantic Coast environment in the space of six acres, featuring some 400 animals and birds of 70 species (some roam the park freely), 300 species of plants and 4,100 types of orchids. (Praca Washington s/n, Jose Meninore; open daily 8 a.m. to 6 p.m.)

Monte Serrat: Get a stunning view of Santos and the surrounding beach towns by taking the funicular up this nearby natural monument. At the top of the hill, you can find the beautiful former casino, built Art Deco-style in the 1920's. The site also features a chapel and dining facilities.

The Maritime Museum: You'll find this in Old Town. Explore art and relics illustrating the link between Santos and the sea. The museum also has a lovely gift shop. (Rua Governador Fernando Costa 343, Ponta da Praia)

Santos Municipal Aquarium: This is a fun place to visit, especially with the family. The usual sea creatures and penguins are there, but what is of greatest interest is the Amazon Basin filled with unique fish native to the Amazon River. (Av. Bartolomeu de Gusmao open Tuesday through Friday 9 a.m to 6 p.m. and Saturday and Sunday 9 a.m. to 8 p.m.)