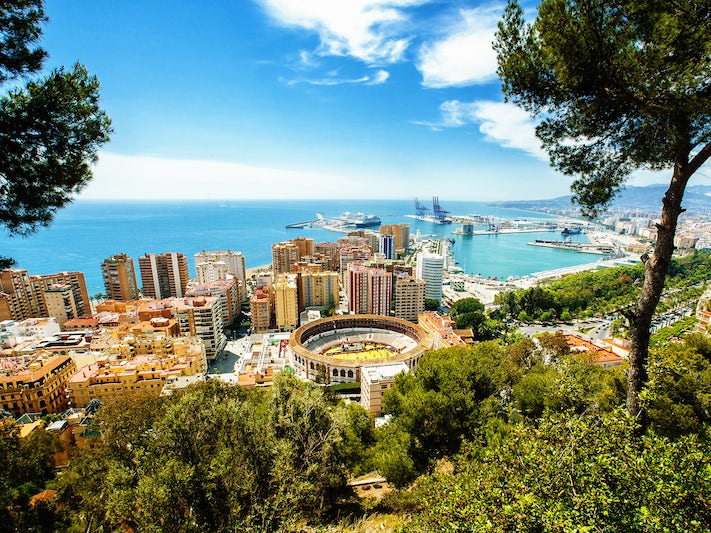 Find Things to Do in Malaga on Viator

Popular Things to Do in Malaga

Food and Drink in Malaga

Specialties in Malaga include fresh fish -- fritura Malaguena -- and ice cold gazpacho, a blend of tomato, peppers, cucumber, garlic, olive oil and bread that is refreshing on a hot day. The Malaguenos love their food, and you'll find an enormous choice of bars and restaurants at which to enjoy dinner or lunch al fresco. Most are child friendly. Tipping is appreciated, though there is no expected amount.

Cafe Central: Opening onto a historic square, you can choose to sit inside or outside. This is an all-day dining spot, where you can kick start your day with chocolate and churros (spiral-shaped doughnuts), moving on to tapas and traditional dishes later in the day. (Plaza de la Constitucion 11; 952 22 49 72; open 8 a.m. to midnight Monday to Sunday)

Malaga has at least 16 beaches to choose for relaxing or water activities. All are easily accessible, and many have beach bars and restaurants serving local specialties.

Best for Active Types: El Palo beach is lined with restaurants and bars and is popular with locals and tourists, particularly for diving and fishing.

Best for Relaxing: La Malagueta beach's broad sands are within easy reach of the city center, so there are plenty of bars restaurants nearby. Wi-Fi zones are located next to the beach bar and hammock areas.

Best for the Uninhibited: San Julian Guadalmar beach, an official Malaga nudist beach, though also frequented by suited bathers, is backed by a golf course. Facilities include showers, beach bar and public telephone.

Picasso Museum: A visit to Malaga wouldn't be complete without a peek inside. With more than 200 paintings, drawings, ceramics, engravings and sculptures, the museum's collections chart artist Pablo Picasso's progress from the late 19th century until his death in 1973. Situated in the Palacio de Buenavista, an elegant 16th-century building in the heart of the old town, the museum is a few minutes away from the house where Picasso was born on Plaza de la Merced (also open to the public). At least one temporary exhibition is usually running, and there is also a good bookshop and a pleasant courtyard cafe. (Palacio de Buenavista, San Agustin 8; 952 60 27 31; open 10 a.m. to 8 p.m. Tuesday, Wednesday, Thursday and Sunday, 10 a.m. to 9 p.m. Friday and Saturday, and 10 a.m. to 8 p.m. Mondays in July and August)

Montes de Malaga Natural Park: A couple of kilometers outside town, this densely wooded region has pine covered mountains, waterfalls and meandering streams with five signposted walks. The park contains 400 plant species, 90 birds, 27 mammals and 19 reptiles, which means there is a fair chance of seeing a wealth of wildlife, such as chameleons, geckos, golden eagles and black and white storks.

Gibralfaro Castle: Built in the 14th century, this castle has solid ramparts rising majestically from dense woods of pine and eucalyptus. Enjoy a scenic walk, then relax at the outdoor cafe. To enjoy more of the city's history, visitors can stretch their legs on a 20-minute climb farther up the hill from the castle to the crest of the escarpment and take in the unrivalled views. (Camino Gibralfaro 11; 952 22 72 30; open 9 a.m. to 8 p.m. Monday to Sunday April to October and 9 a.m. to 6 p.m. Monday to Sunday November to March)

Shopping: The historic center of town is a shopping paradise, with hundreds of all kinds of shops. Head to the pedestrian street Calle Marques de Larios, which is near the port. It offers plenty of shopping options, and if you love shoes this is where to come. The Vialia Shopping Centre close to Maria Zambrano train station is where you'll find High Street names and designer outlets, while the vast El Corte Ingles department store on Avenida de Andalucia sells everything you can imagine. Many shops are open 9 a.m. to 9 p.m., though many close from 2 p.m. to 5 p.m. for a siesta break.

La Alcazaba: One of the city's major landmarks, the fortress dates to the 700s, although much of the structure belongs to the mid-11th century. The entrance is through the gateway known as the Puerta del Cristo (Christ's Door), where the first mass was celebrated following the Christian victory over the town. The pathway traverses attractive landscaped gardens punctuated with fountains, through the gateways of Puerta de las Columnas, Arcos del Cristo and Arcos de Granada. Several terraces offer magnificent views of the town and harbor. A small palace within the inner perimeter is home to an Archaeological Museum. There is a steep path from Plaza de Aduana that leads to Gibralfaro Castle, which crowns the Gibralfaro Hill. (Plaza de la Aduana, Alcazabilla 2; 952 22 72 30; open 8 a.m. to 9 p.m. Monday and 9 a.m. to 8:15 p.m. Tuesday to Sunday during summer months and 9 a.m. to 6 p.m. Monday and 8:30 a.m. to 7:30 p.m. Tuesday to Sunday in winter months)

Mercado de Atarazanas: Within the city's bustling marke, stalls sell fresh fish, spices, deli items, fruit and vegetables. The building incorporates the original Puerta de Atarazanas, the 14th-century Moorish gate that once connected the city with the port. Walking into the market through this arch, you will be wowed by the magnificent stained glass window.

The Cathedral: Dating from the 16th century, the cathedral has one incomplete tower because of lack of money when being built, resulting in an odd lopsided effect. Gothic, Renaissance and Baroque architectural elements reflect the long period of construction. Inside are carved choir stalls and 18th-century organs. The choir stalls were completed by Pedro de Mena, one of Spain's most celebrated wood-carvers of the time. (Calle Molina Lario 9; 952 21 59 17; open 10 a.m. to 6 p.m. Monday to Friday, 10 a.m. to 5 p.m. Saturday and 2 p.m. to 6 p.m. Sunday)