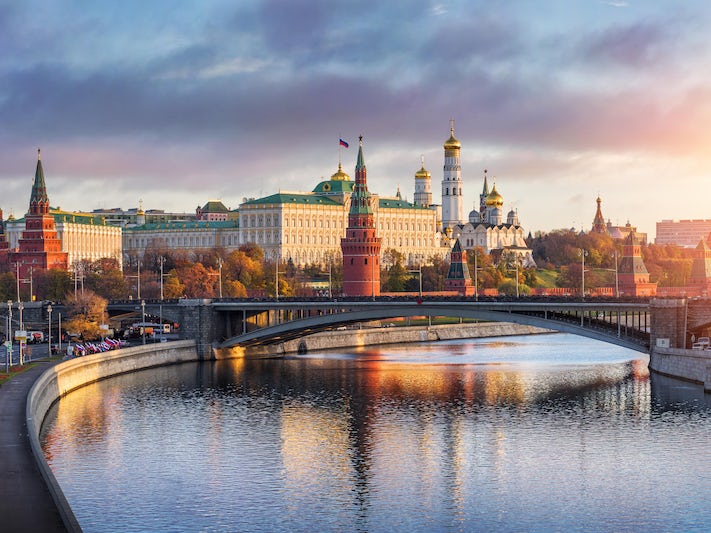 Find Things to Do in Moscow on Viator

Popular Things to Do in Moscow

Food and Drink in Moscow

While traditional Russian food has a well-deserved reputation for heaviness, Muscovites have embraced international cuisine, and you're more likely to find French or sushi restaurants than a piroshky stand on the city's major boulevards. If you are looking for something more exotic, seek out the restaurants that feature specialties from the sprawling country's current and former provinces, such as Ukraine, Uzbekistan, Georgia or Azerbaijan. Keep in mind that Moscow is an expensive city; in the major tourist areas, a restaurant meal can lead to serious sticker shock.

The department store GUM takes up almost one side of Red Square, and its downstairs cafe is the only one that's actually on the square (and it's priced accordingly). Drink in the scenery and have lunch with Arab sheikhs and German families (or save money and go upstairs to the third-floor food court instead).

Moscow's most astute restaurateur is Arkady Novikov, and the city's professionals flock to his establishments, which number more than 50 different iterations. Tourists might want to try his mid-priced chain Yolki-Palki (a Russian buffet with 40 branches around town); Uzbekistan, an old restaurant that he updated for modern tastes (29 Neglinnaya Ul.); or -- for serious trendies -- Chips, a nightclub/lounge located near the TsUM Department Store and Bolshoi Theatre (Kuzneskiy Most 7). Dress to impress when you go upscale; Moscow doormen are notorious for their "face control," allowing in only those they deem wealthy, pretty or sophisticated enough.

If you aren't up for facing the doormen, Cafe Pushkin is another upscale restaurant that's known to be friendly to international visitors. Located in an 18th-century mansion along Tverskoy Boulevard and founded by another Moscow mega-restaurateur, Andrey Dellos, the establishment features Russian dishes, including an impressive choice of dumplings, seafood and meats. Expect to pay up to $100 per person for a full lunch.

All kinds of Western fast food joints lie along Old Arbat, and while it's fun to see Starbucks and Wendy's spelled in Cyrillic, it's hardly adventurous. A better choice: Moo Moo, a Russian fast food joint (noticeable by the cows out front) that sells blinis (thin pancakes), chicken shashlik (grilled, skewered meat), turkey in juniper sauce and beetroot. We enjoyed flatbread-wrapped kebabs and khachapuri (a Georgian cheese bread) at a restaurant on the Arbat; look for decor that is more Middle Eastern than Russian for this and Azerbaijani cuisine.

If you're really famished and need a quick snack, a lineup of fast food options, including McDonald's, a sushi restaurant and a British pub are located in the underground mall in Alexandrovsky Square, near the fountains just outside the Kremlin.

Long before 20th-century leaders such as Joseph Stalin used Red Square as a staging place for rallies and tanks, it served as Moscow's main marketplace and as the coronation site for Russia's tsars. Contrary to its communist connotation, the word "red" is synonymous for "beautiful" in the Russian language, and the square, flanked by St. Basil's Cathedral on one side and the turreted walls of the Kremlin on another, is certainly that. While tourists take over by day, Red Square comes alive at night with strolling locals who love to see its buildings lit up.

Tackling the Kremlin could take several days; the fortress includes nine onion-domed churches, the Kremlin Palace that serves as the seat of government and several museums. Of these, the best is the Kremlin Armory, which has coronation robes and dresses from Catherine the Great and other tsars, royal coaches, crowns and thrones, gifts from visiting heads of state and -- of course -- the country's collection of Faberge eggs. If you're not with a group, tickets can be bought for set times at 10 a.m., noon, 2:30 p.m. and 4:30 p.m. (Closed on Thursdays)

While you're there, pay the extra rubles to gawk at the exquisite and invaluable state jewels contained in the Diamond Fund. Perhaps the most outrageous: The Grand Imperial Crown, made for Catherine the Great in 1762 and used for the coronation of all tsars through Nicholas II. It has 5,000 diamonds and 75 pearls, for a whopping 398.72 carats.

No matter how many pictures of St. Basil's Cathedral's iconic onion domes you've seen, getting up close to this architectural masterpiece is an awe-inspiring experience. Built during the reign of Ivan the Terrible in 1561, the cathedral's interior is unlike those seen elsewhere in Europe; instead of a vast expanse, the church is divided into small rooms connected by a labyrinth of corridors. To avoid confusion, realize that Russians call the structure the Cathedral of the Protecting Veil of the Mother of God or the Cathedral of St. Vasily the Blessed. You will need to pay an extra fee to take photos. (Red Square; open daily 10 a.m. to 7 p.m. in summer)

Yes, the lines at Vladimir Lenin's Tomb are long. But how can you pass up the chance to see the preserved body of the founder of communism? Expect cellphones and cameras to be confiscated in a much more thorough procedure than you'll experience at the Moscow airport (and it will cost you to check your items). On the walk to the square-base pyramid mausoleum on Red Square (reopened in 2013 after a renovation), you'll see graves and markers for other prominent Russian leaders and figures, including Stalin and the revolutionary sympathizer John Reed. Show respect on your way in, or you'll face displeasure from the stony guards. (Closed Mondays, Fridays and holidays; visiting hours 10 a.m. to 1 p.m.)

For lovers of classical ballet and opera, a night at the Bolshoi marks a dream come true. Most river cruises have a few tickets for their guests at prices around $200 each. Or you can book tickets on your own through the theater's Web site, although it's a little hard to navigate. Even if you aren't a theatergoer, you'll still want to take a pass by the magnificent building, which opened in October 1856 to mark Tsar Alexander II's coronation day, as it represents the country's commitment to classic culture.

Everyone talks about Russia's justly famous ballet and opera. But for a cultural experience of a different sort, you can't beat a performance by a folk instrument orchestra, where balalaikas and domras substitute for violins. While several cruise lines include this as an excursion, ask your hotel concierge or cruise director whether any orchestras are in town, or consult the Moscow Times, the city's English language newspaper, for performances.

Traditionally the hub of Moscow tourism, the pedestrian thoroughfare of Old Arbat, with its fast food and souvenir shops, is looking a little dated these days. It's worth a stroll if you have time to kill, but if your time is limited, visit a museum instead.

If you're shopping for souvenirs such as nesting dolls or Soviet-themed T-shirts, you can find plenty of kitsch in the aforementioned Old Arbat. There's also a tourist market with souvenir stalls between Revolution Square and the entrance to Red Square. Otherwise, try Tverskaya Street, conveniently located for tourists staying in the brand-name hotel chains where book and music stores and boutiques anchor the ground floors of historic buildings. Foodies won't want to miss Yeliseyevsky, an Art Noveau masterpiece of a grocery store where you can buy all kinds of Russian delicacies, including, of course, caviar. Or try the fashionable GUM, the department store off Red Square. The first floor of this building created in 1893 is full of designer boutiques such as Dior, Jil Sander and Louis Vuitton. Even if you can't afford anything, the mall retains its 19th-century layout and -- who knows? -- you might see an oligarch or two.