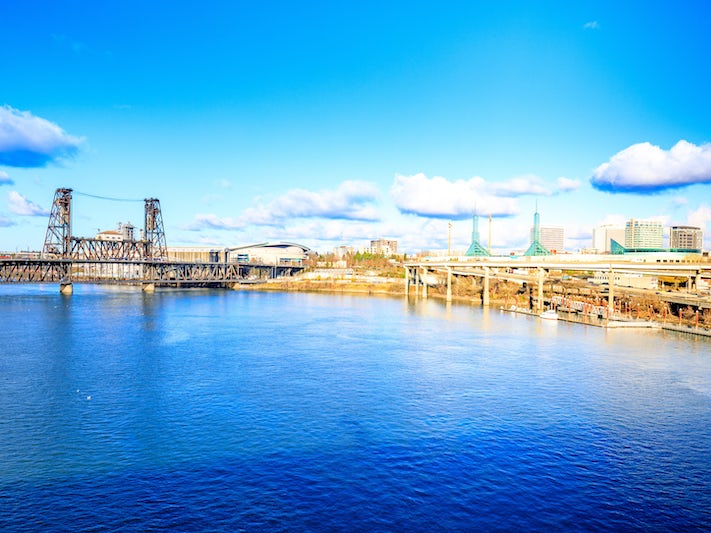 Find Things to Do in Portland (Oregon) on Viator

Popular Things to Do in Portland (Oregon)

Food and Drink in Portland (Oregon)

Drinking is a serious business in PDX. Sure, craft beer is a hallmark of the Pacific Northwest, and cocktail mixology has never been fresher, but we're not just talking about happy hour; coffee and tea in Stumptown are elevated to a new level with baristas wielding chemistry degrees and some of the finest tea services outside of London. Prefer a glass of vino? The nearby Willamette Valley in Oregon is considered comparable to France's renowned Burgundy or Alsace growing regions by international wine experts -- so a glass of what's local means you'll be getting top quality.

For beer, you're safe trying just about anything, but might recognize the Rogue brand, based in Oregon. For cocktails, pretend you're taking a cruise to the tropical islands with not one but two spectacular tiki bars: Hale Pele and Alibi, with Rum Club serving up similar drinks in a more laidback atmosphere. The Portland Wine Bar and Winery Tasting Room is a self-explanatory locale to sample the best of what Oregon's grapes have to offer. To warm up, try a cup of joe at Water Avenue or Case Study. If you have an afternoon, be sure to book a tea service at the Hotel deLuxe for traditional British style (they import the clotted cream) or Headwaters at the Heathman Hotel for a Russian tea, provided in partnership with local tea legend Steve Smith. Third Wave Coffee Tours provide a guided trek through unexpectedly diverse offerings of coffee and tea around the city, depending on what you're looking for.

The Chinese and Japanese Gardens

The Lan Su Chinese Garden is a stunning walled garden built by artisans from Suzhou, a sister city to Portland with their own Ming Dynasty gardens, and spans a city block. The Tao of Tea, a two-story teahouse, is located in the gardens and accessible with admission ($10 for adults, with discounts given to students, seniors and small children). The gardens are a 7-minute walk from Tom McCall Waterfront Park.

The Portland Japanese Garden is a 15-minute drive from the park, but feels like another world. Perched atop a hill, this traditional Japanese garden is located within Washington Park, which also includes the Oregon Zoo (a 10-minute ride away). Waterfalls flow and cultural exhibits run year-round. A tea house called the Umami Cafe is also located within the garden. Adults pay a $15 admission, with discounts for students, seniors and children. A bonus of visiting the Japanese garden is that the world-famous International Rose Test Garden is free and just across the street. (They don't call Portland "Rose City" for nothing.) Blooms can last into late fall.

Bibliophiles, prepare thyselves: Powell's is considered the largest bookstore in the world, by shelf space. It's a strikingly well-organized rainbow of sections and aisles, divided by colors for various rooms, including a rare book room and of course, a cafe. This independent book haven is a beloved local space, and spectacular for people-watching. It's a 15-minute walk or 5-minute ride from Tom McCall's; if you're an avid bookworm, put aside some time to spend here (and maybe pick up a good read or two for the cruise or flight home).

Portland is brimming over with a food scene that's as eclectic as it is incredible. Top-rated Russian or authentic New Mexican fare all have a place, and due to the competitive nature of the city's culinary offerings, only the creme de la creme make it. Pine Street Market is an easy, one-stop way to sample some of Portland's most satisfying bites -- a five-minute walk from the waterfront. Marukin Ramen is an authentic Japanese ramen outlet, and the only one the company runs outside of Japan (they came to Portland for the quality of its water); Bless Your Heart Burgers serves up classic patties with a '90s twist; and Kure has the health-conscious covered with organic juices, smoothies, acai bowls and more. After lunch, get in line at WizBangBar, the soft-serve location of Portland's famous Salt & Straw ice cream magnate. The hall can get a little hectic around lunchtime, so be prepared to sit with strangers -- new friends! -- at long tables, if you can grab a seat.

Truth is almost always stranger than fiction. In the mid-19th century, single men indulging in a few drinks at the local bar might wake up to find themselves as slaves on a ship. The practice, called shanghaiing, involved kidnapping men to sell against their will as sailors on ships, and they were smuggled through these tunnels to the shore in what is called The Old Portland Underground. Consider a tour of Portland's scandalous underground history with Portland Walking Tours or the Cascade Geographic Society. If you're not up for a trip below, grab a slice at Hobo's, the pizzeria and starting point for many of these tours is considered haunted by the spirits of those wronged in the Shanghai Tunnels.

You haven't been there if you haven't taken at least one touristy photo, right? Lucky for you, the iconic White Stag sign (a women's clothing label, now a neon indicator that you're in Portland, Oregon) sits atop the building at 70 NW Couch Street, right along the waterfront park. Getting a good angle might involve a walk along one of Portland's many bridges -- not a bad trade.