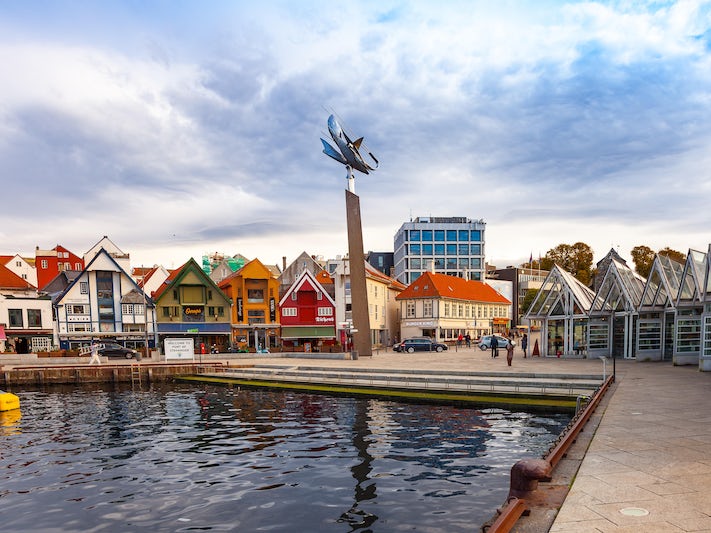 Find Things to Do in Stavanger on Viator

Popular Things to Do in Stavanger

Food and Drink in Stavanger

Norwegian fare centers on fish and local meat, as well as berries from the area such as cloudberries, strawberries, raspberries and lingonberries. Fish is often served cold -- think gravlax (salt-cured salmon) or lutefisk (fish steeped in lye) -- or as fish soup; meats might be reindeer, elk or even whale. A yummy, and affordable, treat is a Norwegian waffle served with jam and sour cream, or even the caramel-flavored brown goat's cheese.

In Stavanger, restaurants line the harbor; many are housed in old warehouses and are an easy walk from the cruise ship. You will also find a few scattered among the shops of the pedestrian area between the Petroleum Museum and the tourist office. Prices will be higher than you're used to at home.

Restaurant Renaa: One of Norway's top chefs, Christopher Davidsen, operates three restaurants in one Stavanger location -- and two are open for lunch. For affordable (by Norwegian standards) sandwiches in a cute cafe setting or to go, head to Renaa Express. Or for a sit-down bistro experience, dine at Matbaren. (Breitorget 6, but enter from Bakkegata; open Monday to Saturday from 11 a.m. to 1 p.m., Sunday 1 p.m. to 10 p.m.)

Fisketorget (Fish Market): For seafood and nothing else, Fisketorget is located at the top of the harbor, next to the actual fish market. The family-operated restaurant and shop offers a selection of fish and shellfish. (Strandkaien 31; open Monday to Wednesday, 11 a.m. to 9 p.m., Thursday to Saturday 11 a.m. to midnight)

NB Sorensens Dampskibsexpedition: A harborfront location with a mouthful of a name, this purveyor of traditional food offers two dining experiences. Choose the ground floor for a pub atmosphere and outdoor seating and the upper level for a nice, sit-down meal featuring local ingredients. (Skagen 26; +47 51 84 38 20; booking@herlige-stavanger.no; open Monday to Wednesday 11 a.m. to midnight, Thursday to Saturday 11 a.m. to 2 a.m., Sunday 1 p.m. to 11 p.m.)


Sjohuset Skagen: Try whale or reindeer for lunch with a view of the harbor at Sjohuset Skagen, located in an old warehouse building right on the waterfront. (Skagenkaien 13; open Monday to Saturday 11:30 a.m. to 11 p.m., Sunday 1 p.m. to 9:30 p.m.)

Old Stavanger: For a lovely walk and photo opportunity, head to Old Stavanger, a neighborhood of wooden houses dating from the turn of the 18th century. All the cottages are painted white and often decorated with colorful flowers. As nearly all are residences, you cannot tour inside the buildings.

Norwegian Canning Museum (Norsk Hermetikkmuseum): Did you know the sardine can key was invented in Stavanger? Learn how sardines were caught, smoked and packed in 19th and 20th century Stavanger in this museum, housed in an old canning factory. Twice a week, they smoke fish the old way and let visitors taste the results. Free tours (with admission) are conducted in English on the hour and are well worth it for making sense of all the contraptions jumbled together in the main downstairs area. Your ticket also gets you entry to the Stavanger Maritime Museum and The Norwegian Printing Museum. (Ovre Strandgate 88 in Old Stavanger; open daily 10 a.m. to 4 p.m.)

Norwegian Petroleum Museum: Interactive exhibits, 3D movies and models of oil rigs make learning about the formation and extraction of Norwegian oil interesting and fun. The museum is surprisingly kid friendly, while looking seriously at the repercussions of oil and gas use worldwide today. (Kjeringholmen; open daily 10 a.m. to 7 p.m.)

Lysefjord and Pulpit Rock: The 42-kilometer Lysefjord is known for its vertical rock walls and Pulpit Rock, a natural rock formation rising more than 600 meters above the water. Sightseeing cruises depart from the main inner harbor in Stavanger and sail down the Lysefjord. Take a ship's excursion, or book independently. Last-minute tickets can be purchased at the tourist office, but you're safer making arrangements in advance. (Note: Hiking enthusiasts might wish to hike to the top of Pulpit Rock, but the all-day outing takes longer than most ships are in port.)

Utstein Monastery: This preserved medieval monastery is the only one of its kind in Norway. The main buildings were constructed around 1260, but some parts might date to the 9th century. Take a guided tour of the monastery, now a museum, or set off on a short walk to visit the nearby lighthouse and fort. It's about a half-hour drive from Stavanger. (Mosteroy in Rennesoy; open mid-June to mid-August Monday to Saturday 10 a.m. to 4 p.m., Sunday noon to 5 p.m.; mid-May to mid-June and mid-August to mid-September closed Mondays)

Valberg Tower: It may only be 48 steps to the top of Valberg Tower, but to reach the base you need to climb up steep streets or outdoor stairs to this old town high point. The first landing features a small museum about the watchmen who originally used the tower to spot fires in the 19th and 20th centuries, and the second offers 360 degrees of windows with views over the city and harbor.

Iron Age Farm: See what farming life was like circa 350 to 550 A.D. at the Iron Age Farm. It's built on an archaeological site, and the farm buildings -- including longhouses, wells and burial mounds -- were rebuilt where they originally stood. Farm workers, dressed in period garb, reenact daily life, with opportunities for visitors to get some hands-on learning. It's accessible by public bus or ship's tour. If you purchase a ticket to the Museum of Archaeology, it is also valid for the Iron Age Farm. (Ullandhaugveien 165; open mid-June to mid-August daily 11 a.m. to 4 p.m., and late May to mid-June and mid-August to late September on Sunday from 11 a.m. to 4 p.m.)

Stavanger Cathedral: St. Svithun's Cathedral, the best-preserved medieval cathedral in the country, was founded in 1125. It's a mix of Anglo-Norman and Gothic architectural styles. Don't miss the pulpit and epitaphs created by a Scottish carver; designs on the pulpit tell the story of the Bible from Adam and Eve to Christ in heaven. (Open June to August daily 11 a.m. to 7 p.m., September to May on Monday to Saturday 11 a.m. to 4 p.m.)

More Museums: If you're looking for more local history and culture, Stavanger features plenty of museums, many within walking distance of the port. Try the Stavanger Museum of Natural and Cultural History, Maritime Museum, Stavanger Art Museum and Museum of Archaeology.

Many of the museums have ticketing agreements; a ticket to the Petroleum Museum gets you a 50 percent discount at the Museum of Archaeology and Stavanger Museum, while your Canning Museum ticket gains you free entry to the Stavanger Maritime Museum and The Norwegian Printing Museum.