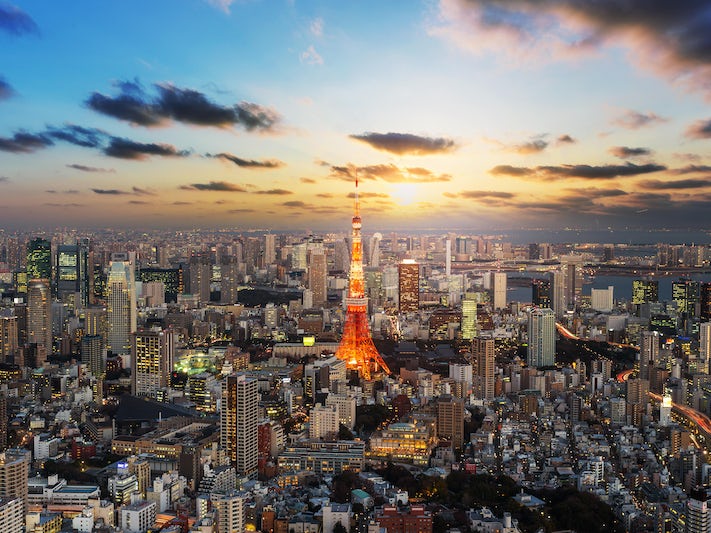 Popular Things to Do in Tokyo (Yokohama)

Tokyo, the capital of Japan, is a mega metropolis full of flashing lights, sounds and lots and lots of people. It is a marvel just to experience the city's ebb and flow, but there are also plenty of shore excursions available for cruisers to take in some of the highlights. For a slower pace, take excursions to the Imperial Palace or to see some of the Buddhist temples and Shinto shrines. Or, embrace the buzz at a karaoke palace or by riding to the top of Tokyo Tower for the most magnificent view. Visit Odaibo for excellent sushi on the waterfront or hit up the Akihabara district to experience some of the most cutting-edge technology in the world. Japanese cuisine is a must-try so be sure to stop for a bite before heading back to your cruise ship.

Tokyo is a popular destination year-round, though many cruisers visit in the spring when the cherry blossoms are in bloom. The official language is Japanese, though you might encounter a bit of English. Currency is the yen.

Find Things to Do in Tokyo (Yokohama) on Viator

Food and Drink in Tokyo (Yokohama)

Like any other major metropolitan city, Tokyo offers a vast assortment of restaurants and cuisines. With that said, when in Tokyo, do as the Japanese do and indulge in sushi, dumplings and noodles at least once.

Tokyo has numerous izakayas, drinking establishments that also serve small bites with beer and sake. While craft beer and microbrews have caught on (as in most cosmopolitan areas worldwide), popular brands include Baird, Asahi, Kirin and Sapporo.

For those who have only sampled sake in an American sushi restaurant, the sheer variety of rice liquor in Japan can be overwhelming. Nigori, or unfiltered sake, is colored white instead of clear and has a sweeter taste than the clear sake that you've probably had in the U.S.

Tokyo is famous for its tiny bars, some of which will accommodate just four people. You'll find these in the Golden Gai, a few minutes' walk from Shinjuku Station. If you want a glimpse into how Tokyo looked in the first half of the 20th century, head here. A series of tiny, narrow streets with two-story houses, this is a wonderfully atmospheric part of town, run-down, slightly chaotic, but perfectly safe.

In the Mood for Sushi: The tiny Sushiryori Inose isn't the easiest restaurant to find, but it's got some of the best sushi in Tokyo. The elderly couple who runs the place is very friendly, though their English is limited. Be sure to make a reservation because it fills up quickly. (2-20-2 Higashigotanda, Shinagawa)

Noodles: Shodai is a two-floor noodle restaurant in the Shibuya district best known for its curry noodles. Sit downstairs at a sit up bar and watch the noodles being made, or go upstairs for a more formal atmosphere with tables and waiter service. Specializing in soba noodles, vegetable tempura and shrimp at a reasonable price. Good selection of sake, too. (1-1-10 Ebisuminami, Shibuya Tokyo Prefecture)

Uniquely Japanese: A distinctively Tokyo experience is a visit to a maid cafe, most of which are located almost exclusively in Akihabara, where young women in poufy French maid uniforms serve customers with silly deference. MaidCafe is a chain with several locations in the district. Keep in mind, they charge \$20 a person just to enter the restaurant, then overcharge for basic diner food, and they don't allow you to take any pictures unless you pay extra.

The two Michelin-starred restaurant Hamadaya offers traditional Japanese cuisine served by kimono-clad waitresses embodying the grace and poise of a geisha. Eating there is like stepping back into Japan's bygone days. Diners are invited into private tatami rooms, where the decor highlights Japanese culture and excellent meals are served by attentive geisha. (3-13-5 Ningyo-cho Nihonbashi Chuo-ku; open 11:30 a.m. to 3 p.m. Wednesday, Thursday and Saturday)

Upscale Elegance: If you are spending a night or two in Tokyo before or after your cruise (it is only open in the evenings) and want a traditional hibachi experience in a refined environment, then Atelier X is an excellent option. The restaurant is in an upscale part of town and you head downstairs to sit around the hot cooking plate. It's not the typical cruise ship-style hibachi (food is not juggled and thrown), but delicious cuts of meat, fresh seafood and vegetables, along with sticky rice and miso, are all created in front of you by talented chefs. Opt for the sake tasting (hot or cold) as a digestif. (7 Chome-21, Roppongi, Minato City, Tokyo; open 5.30 p.m. to 3. a.m.)

Vegetarian Delight: Whether you're vegetarian or not, the noodles (all dishes are actually vegan) at T's TanTan Tokyostation inside Tokyo Station are worth every yen you pay -- and you don't pay that much! Be careful going during prime lunch hours or you could be waiting for up to an hour. (1-9-1 Marunouchi, Keiyo Street, Chiyoda; open 7 a.m. to 11 p.m. Monday to Sunday)

Tokyo is an intriguing mix of ancient, modern and futuristic. In a single day, you can go from the serenity of the temples of Asakusa to the glitzy name-brand shops of Ginza.

Senso-ji: Located in the Asakusa district of Taito, is one of Tokyo's most important -- and popular -- Buddhist temples. Though the actual buildings, including the impressive Thunder Gate and a lovely five-story pagoda, have been rebuilt many times, Senso-ji originally dates to 645 A.D., making it the oldest temple in Tokyo. Within the temple you'll find omikuji stalls, where you can pick up a clue to your future written on scraps of paper or consult an oracle for answers to questions. After you've visited the temple, make sure you wander the nearby streets dotted with souvenir shops selling everything under the sun and eateries serving noodles, sushi and tempura. (Open 6 a.m. to 5 p.m. daily)

Meiji Shrine: Dedicated to the deified spirit of Emperor Meiji, the first emperor of modern Japan, is another of Tokyo's most visited shrines. Located right near the busy Harajuku train station, the shrine and next door Yoyogi Park are nevertheless peaceful respites with walking paths meandering through a quiet forest. At the northern end of the shrine grounds is the Meiji Jingu Treasure House (9 a.m. to 4:30 p.m. daily), which is home to a collection of personal items that once belonged to the emperor and his empress. On the southern grounds of the shrine is the Inner Garden (9 a.m. to 4 p.m.). This for-fee space is especially popular in early summer when the irises are in bloom.

Shibuya Crossing: Famously seen on the big screen in "Lost in Translation," this is like Times Square on steroids. Located outside Shibuya train station, the crossing is always packed (and we do mean packed!) with shoppers and commuters, and when the lights turn red, everyone one of them steps out onto the street to cross, a veritable surge of humanity. Don't miss Tokyo's most famous pooch -- and most popular meeting spot -- Hachiko. This loyal hound came to Shibuya Station every day to meet his owner, returning from work. After the professor died in 1925, Hachiko still came to the station daily until his own death 10 years later. Today there is a statue recognizing his loyalty.

Ginza: One of the world's most upscale neighborhoods, this is the place to go for high-end shopping in Tokyo, as well as some of the city's best restaurants. You'll find every luxury brand represented, including Chanel, Dior and Gucci. It's also where you'll find a \$10 cup of coffee, so make sure to check the price of everything before making a purchase.

Sumo: Head to the Ryogoku district and the 10,000-seat Ryogoku Kokugikan Sumo Hall. Fifteen-day Sumo tournaments are held three times a year: in January, May and September (you can't just turn up though; you need to book beforehand).

Kabuki: This is a classical Japanese dance-drama performance best known for the elaborate makeup worn by performers. Kabuki is performed in multiple acts and can take up to four hours, but visitors may opt to purchase single-act tickets for a taste of the art form. Be sure to rent translation headsets to understand what's happening on stage. Kabuki-za in Ginza is the main kabuki theater in Tokyo, offering a variety of kabuki shows year-round.

Toyusu Market: Sushi-lovers who want to see where all the fish comes from should head to Toyusu Market, a wholesale market that replaced the famous Tsukiji Fish Market in 2019. It is two markets in one - one for seafood and one for vegetables -- and the largest wholesale fish and seafood market in the world. You can watch proceedings from a viewing gallery on the second floor or get in on the action with a pre-booked auction tour. There are plenty of restaurants in the market -- and you know the sushi doesn't get fresher than this!

Edo Museum: This traces the city's history from its early days of Edo to its transformation into modern day Tokyo. With lots of models and displays, as well as a few interactive exhibits, the museum is a great place to learn about the city.

Suginami Animation Museum: This free museum traces the art of animation in Japan. There is also a cinema attached where you watch anime screenings. (3-29-5 Kamiogi, Suginami-ku; Open Tuesday to Sunday 10 a.m. to 6 p.m.)

Ghibli Museum: Chances are even if you haven't (knowingly) seen a Ghibli film, your kids have, and this wonderful museum brings the movies to life and gives you an insight into director Hayao Miyazaki's mind. The only drawback? Tickets are like gold dust and you need to get them on the day of release -- the 10th of every month. (Jiburi Bijutsukan 1-1-83 Shimorenjaku; Daily except Tuesday 10 a.m. to 6 p.m. ).

Skytree Tower: On a sunny day, this is the best place to go for a view. The 2,080-foot tower is the tallest building in Japan. When you're done, spend time exploring Skytree Town, with its eight floors of shopping and dining, as well as a full-fledged aquarium and planetarium.

Mount Fuji: If you've got an extra day of free time and the weather is clear, consider heading out of town for a visit to Mount Fuji. The highest mountain in Japan and one of the best-known symbols of the country, snow-capped Mount Fuji is about 60 miles away from Tokyo. Numerous operators offer day tours, which typically include a bus ride about halfway up the mountain to the 5th Station and may also feature a lake cruise on nearby Lake Ashi.