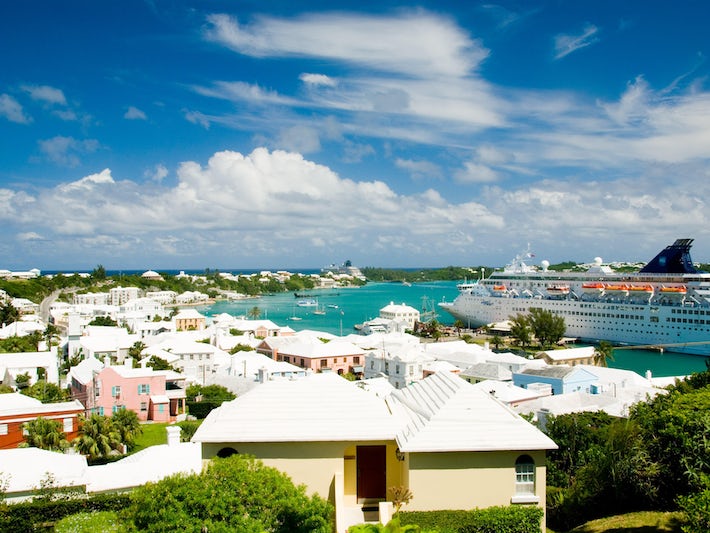 Popular Things to Do in St. George's

Find Things to Do in St. George's on Viator

Food and Drink in St. George's

Note: Order anything made with their fabulous Bermuda onions.

Carriage House: Expensive, but worth it. They carve the rack of English spring lamb tableside. Their signature Bermuda Triangle -- filet mignon, shrimp and chicken breast -- is a top choice. Per-person cost for three courses including wine will run about $25. Daily 11 a.m. - 2:30 p.m. 22 Water St.

White Horse Tavern: Would you believe us if we said the Philly steak sandwich was to die for? Per-person cost for three courses including wine will run about $25. Daily 11:30 a.m. - 4:30 p.m. King's Square.

A rum swizzle (rum, apricot brandy, brandy, honey, lemon and lime) at the Swizzle Inn, considered the inventor of the drink. When you're done, stop in their gift shop and buy a swizzle rum cocktail shaker for concocting them back home.

The beaches are small when compared to most found in the U.S., ranging from as narrow as 15 yards to about half a mile. Set your mind on idle and let the sun go to your head on pink-tinged sands that seem to melt into the sea.

Notes: Bermuda's Guide to Beaches and Transportation is free at all visitor centers and most hotels. Body boards can be rented for about $20 from local shops around the island.

Tobacco Bay: Great snorkeling. You can see families of squid and even octopus. Gear rentals, umbrella rentals, changing room, snacks. Tends to get crowded with other cruise passengers.

Golf
Putting around is easy in Bermuda, given that they've got the most golf courses per square mile of any other place on earth. We've listed those closest to St. George's.

Note: Golf balls are astronomically expensive. Bring your own.

St. George's Golf Club: Wonderful sight lines on an 18-hole par 62 Robert Trent Jones-designed course. This was one of the last designed by Robert Trent Jones Sr. prior to his retirement. You can book tee times up to seven days in advance. Greens fees $50-$55. 441-297-1836.

The Bermuda National Trust Museum: Though it was once the Globe Hotel in the 19th century, its history goes back to 1699, when it was built as the Governor's house. Unbeknownst to anyone, its first governor (Samuel Day) secretly secured the title to the house in order to use it as his future home. His secret was out the day the next governor turned up to move in. Today, the museum exhibits the history of St. George's. Monday - Saturday 10 a.m. - 4 p.m., Sunday 1 p.m. - 4 p.m. King's Square.

Carriage House Museum: Filled with 19th-century buggies and such that were all used to get around before the automobile first showed up in 1946. You'll see beautifully restored broughams, phaetons, an opera bus, even a small child's runabout. Monday - Saturday 10 a.m. - 4 p.m. Water St.

Carter House: One of Bermuda's oldest houses, it's now a museum with exhibitions on the history of whaling, piloting, fishing and farming. It's also a chance to see dolls and children's toys made from palmetto leaves. Tuesday - Thursday and Saturday 10 a.m. - 4 p.m. Second Sunday of each month noon - 4 p.m. Southside Rd, St. David's.

St. George's Historical Society Museum: In a home built around 1700, this museum contains an original 18th-century Bermuda kitchen, complete with utensils from that period. Other exhibits include a rare 300-year-old breeches Bible, a letter from George Washington, and Native American ax heads. Monday - Friday 10 a.m. - 4 p.m. Duke of Kent St.

Somers Gardens: Opened in 1920 by the Duke of Windsor, here lies the tomb of Admiral Sir George Somers amid a lovely array of roses, hibiscus and palm trees. Daily. Duke of York St.

Tucker House Museum: Once the home of the well known Tucker family of England, Bermuda, and Virginia, it displays a notable collection of Bermudian furniture, portraits and silver. You can also see where Joseph Hayne Rainey (a black refugee of the Civil War who worked as a barber before going on to become the first black representative in the U.S. Congress) is said to have set up shop. Monday - Saturday 10 a.m. - 4 p.m. Water St.

Unfinished Church: A beloved landmark, it was to replace St. Peter's. Work was intermittent from 1874 to 1899 -- but beset by financial woes, in-fighting and severe storm damage, parishioners decided to restore St. Peter's instead. Daily dawn - dusk. Duke of Kent St.

Deliverance: Steps from King's Square and the cruise terminal. Head over a small bridge to see a full-scale South American pine, teak and Bermuda cedar replica of the small sailing ship the shipwrecked survivors of the Sea Venture built in 1610 to carry them on to Virginia (the original was probably Irish oak). There's a self-guided tour through the ship. Daily. Ordinance Island.

Featherbed Alley Printery: Check out the working 17th-century Gutenberg-style press that was used for more than three centuries. It's also home to the early editions of the Bermuda Gazette published from 1784 - 1816. Monday - Saturday 10 a.m. - 4 p.m. Featherbed Alley.

Fort St. Catherine: Originally built in 1613, this is probably the most impressive fort on the island, though the original towers have been rebuilt. You'll see a series of dioramas in its museum -- as well as an excellent exhibit of swords, muskets and pistols. You'll also see replicas of England's crown jewels. Daily 9:30 a.m. - 5:30 p.m. Coot Pond Rd.

Old State House: Oldest building in Bermuda (1620). It's where Bermuda's parliament and principal courts met when St. George's was the capital. It's worth a look from the outside. Princess St.

St. Peter's Church: Appropriately high above the town's main street is the oldest Anglican church (early 1700s) in the Western Hemisphere. The original was built in 1612 on the same site. In addition to the beautiful cedar work, you can see the 1625 St. George Chalice and the mahogany alter -- said to be the oldest piece of furniture in Bermuda.

Note: The Old Rectory behind the church is only open to visitors from November - March. Daily 9 a.m. - 5 p.m. (Anglican service Sunday 11 a.m.). Duke of York St.

Crystal Caves: You'll ooh and ahh at what's lurking 80 feet under the ground -- the highest concentration of limestone caves in the world. Discovered in 1905 by two kids playing cricket, the caves are named for the incredibly clear water inside the caves -- so clear that it's possible to see the bottom through 50-plus feet of water. Definitely cross the crystal-clear Cahow Lake via the somewhat submerged pontoon bridge to look down into a fairyland of caves. Guided tours every 30 minutes (you'll finally learn the difference between stalactites and stalagmites!). Daily 9:30 a.m. - 4:30 p.m. Wilkinson Ave, Baily's Bay.

Note: If you have an aversion to climbing lots of steps or you're a bit claustrophobic, cross this off your to-see list.

Nonsuch Island: Near the entrance to Castle Harbor, this exceptional nature reserve is the brainchild of David B. Wingate, Bermuda's conservation officer from 1966-2000. Inspired by the rediscovery of the rare Bermuda petral, he aimed to restore the island's native flora and fauna inside the 15-acre island, incorporating microcosm features of almost every Bermuda habitat from pre-Colonial days. See at least 25 species of migratory water birds such as the yellow-crowned night heron. Access to the island is limited, but visits can be arranged. Near Castle Harbor.