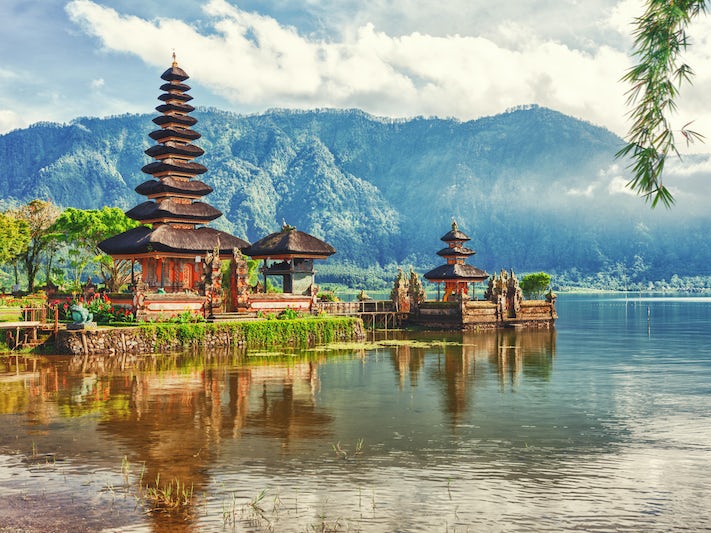 Popular Things to Do in Bali

The Indonesian island of Bali, 2,232 square miles in the Indian Ocean, is an absolutely stunning cruise destination. Beyond its breathtaking natural landscape of verdant mountains and pristine beaches, Bali is home to more than 10,000 ornate Hindu temples filled with colorful floral offerings and a bustling artist community in Ubud -- there are signs of authentic Balinese culture everywhere. For a true treat, book a shore excursion to experience a Balinese massage. Cooking classes are another worthwhile excursion if you want to explore beyond the beach and the island's ubiquitous rice paddies.

Bali has just two seasons (wet and dry), though the weather is hot year-round. The best time to visit is during the dry season between April and November. Locals speak Balinese, though many in touristy areas know some basic English. Currency is the Indonesian rupiah, and it's a good idea to have some cash on hand as many businesses do not accept credit cards.

Find Things to Do in Bali on Viator

Food and Drink in Bali

A classic Balinese dish is babi guling (suckling pig), and devotees love to argue about which restaurant makes the best version. A meal of babi guling consists of slices of spit-roasted pig on a bed of rice, served with pork crackling, long beans and sambal (spicy chili sauce).

Seminyak, the 'village' a couple of kilometres north of Kuta, has morphed into Bali's 'foodie central' and is said to have the lion's share of tasty (and trendy) restaurants, many of which are manned by Australian expats.

On an island with so many choices, it can often be a case of going where the 'in' crowds are dining or striking out and wandering until you find a little place that appeals. Prices tend to be cheap, although a top-notch meal in a swanky restaurant in Seminyak can cost as much as a meal in Australia but with that exotic touch of a balmy night.

Yogi's Paradise & Grill: This place in Kuta has a big fan club that has followed the affable Yogi and wife Nexus from one venue to the next -- the latest being on popular Jalan Legian, just near the junction with Jalan Padma. Cold hand towels and extra frosty beer await patrons. Dishes include the usual Balinese specials such as sates along with snapper cooked in coconut and ginger and wrapped in a banana leaf; the ribs are said to be legendary. (Near the corner of Jalan Legian and Jalan Padma, Kuta; +62 813 3827 6781)

Cafe Degan: Some of the upmarket restaurants and resort dining rooms have a celebrity chef rattling the pans. Some are overseas chefs, and others are local culinary heroes, such as Degan Septoadiji Suprijadi, who was a judge on "Masterchef Indonesia" and runs Cafe Degan. It opened five years ago with an array of Balinese, Javanese (where Degan was born) and Thai dishes. Located in Kerobokan on the fringe of stylish Seminyak, it's a casual relaxed cafe, where patrons rave about the steamed whole fish, the papaya salad and the gulai kabing (lamb curry). (Jalan Petitenget No. 9, Kerobokan; +62 813 3728 1281)

Warung Pak Dobiel: Often crowded with locals and visitors from other parts of Indonesia, Warung Pak Dobiel is said to be one of the best places for babi guling (spit-roast pork) on the island. There's nothing else on the menu and they also do takeaways. Located just near the gate to Nusa Dua, it's an easy walk from the hotels in that five-star enclave. (Jalan Srikandi No. 9, Nusa Dua; +62 361 771633)

Merah Putih: When you're after stunning good looks and fine food, it's hard to go past Merah Putih in trendy Seminyak. Diners sit under an enormous illuminated cathedral ceiling, so high that the indoor palm trees seem to brush against it, supported by eight translucent columns. Clever design features allow light into the 110-seat dining space to sustain the lovely indoor trees but keep the heat out. Seen by day or night, the restaurant, with separate split-level areas for cocktails and pre-dinner drinks, is stunning. The menu is classic Indonesian, with small and large plates designed to be shared, such as softshell crab, grilled tiger prawns and rendang duck curry. (Jalan Petitenget No. 100x, Seminyak; +62 361 8465950)

Potato Head Beach Club: Beach clubs are all the rage in Bali, and Potato Head Beach Club in Seminyak is the place to chill out with cool music by the pool on a rented sun lounge. If you've done the temple visits and shopping, then lie back or sit at the bar, watch the beautiful people (and average tourists), and try dishes from one of the three restaurants. The architecture alone is worth a look especially the hundreds of 18th century teak shutter windows that have been hammered together to form a circular wall. The sunsets are as famous as the client list, which has, of course, included Paris Hilton. (Jalan Petitenget No. 51B, Kerobokan; +62 361 4737979)

The local brew of Bintang beer is the drink in Bali. It's light, refreshing and inexpensive. Those in the know say cocktails are watered down, but if beer isn't your style and you find a good bar in stylish Seminyak, do order a lychee martini. Imported wine (mostly from Australia) is expensive and rarely sold by the glass. There are a handful of local winemakers; Hatten Wines is the original Bali winery and has been making a drinkable drop since the 1990s.

Best Beach for a Half-Day Visit: Sanur, Bali's first beach resort, is still popular today with the clientele being a mix of older tourists looking for relaxation and locals enjoying the sunshine. There you can stroll for almost six kilometres along the boardwalk and watch fishermen pushing their colourful boats out to sea. Protected by a reef, the beach is good for snorkelling and, during high tide, a great place to swim. Attractions include many shops and warungs (cheap restaurants) on the beachfront and, like everywhere in Bali, there are always traders and hawkers selling trinkets, while others provide massages, manicures and pedicures. The beach is northeast of the cruise port and about an hour away by taxi.

Best Visit for the Dedicated Beach Bum: Pantai Mengiat Beach, at upmarket Nusa Dua, is said to be the most beautiful beach in Bali. Although this golden stretch of sand is right in front of several swish resorts, including The Grand Hyatt, the Amanusa and the St Regis, it is a public beach open free to all. Its calm waters make it ideal for swimming and the local cafe will rent out beach chairs, while showers and restrooms are nearby. Nusa Dua is 13 kilometres south of the port, or around a 20-minute drive in good traffic. Access to the beach is via Jalan Pantai Mengiat through a stone gate.

Best Beach for Active Types: All the major water sports are concentrated at Tanjung Benoa Beach, north of Nusa Dua, and only a half hour or so from the cruise port. Many operators line the beach touting for business and offering activities like banana boat rides, parasailing, jet-skiing, scuba-diving, snorkeling, glass-bottom boat rides and trips to the nearby Turtle Island hatchery. The latest thrill is the 'flying fish' ride, which resembles a rubber raft; it becomes airborne when pulled along by a speedboat. The concept is akin to parasailing, but, in this case, two passengers lie down in the rubber raft, while a guide stands up and steers the 'craft' when it's in the air. It rises about five to seven metres above the ocean.

Individual operators tend to offer three to four activities in a package; there are plenty of them around, so it pays to bargain for the best (and safest) deal. Some say the prices are better by booking in advance online.

Uluwatu: Bali has thousands of temples (called pura in Balinese), but Uluwatu, on the very southwestern tip of the island, has an amazing position on the cliff top and is also relatively close to the cruise port. Built in the 11th century and occupying several cliff ridges, the sprawling temple resembles a fortress and has many stairs undulating up and down along the cliff faces. Macaque monkeys inhabit the temple and there are signs warning visitors to be beware as the cheeky creatures are said to steal sunglasses, hats and other possessions. At 6pm each day, the spectacular Kecak Fire Dance is performed against the backdrop of the setting sun. The dance tells the story of a woman stolen from her husband-prince by a demon.

Ubud: Take a trip to Ubud. With a good run, the journey can only take an hour from the port. While this artists' town has always been popular, it has gained ever more fame since the book and movie "Eat, Pray, Love" as the ultimate place of peace and love. Places to visit include the wonderful Tegalalang Rice Terraces, a series of rice paddies carved into the hillside, which are almost a work of art. The best museum is the Neka Art Museum with six pavilions of works, while the Ubud Art Market in the heart of town near the Puri Saren Ubud Palace has dozens of stalls where bargaining is a must. Top off the day with a visit to the Goa Gajah Elephant Cave, where entrance is gained via a shallow cavern through a demon's mouth. If seeing monkeys en masse appeals, you must take a stroll through the Sacred Monkey Forest, but don't feed the little critters!

Kuta Beach: A trip to Bali would not be complete without a stunning sunset and popular Kuta Beach is the place to see the sun sink into the Indian Ocean, complete with an ice-cold Bintang beer in hand. It may not be Bali's best beach, although local groups come and clean it every day, but it's certainly worth strolling along the sand after a busy day.

Cooking Classes: Morning market visits to buy produce for cooking classes are a wonderful way to spend a half or full day in Bali for those embarking or disembarking from a cruise. Each class has about 12 participants, who will learn the art of blending spices and whipping up a small feast. Paon Bali Cooking Class takes place in the family home of Puspa and her husband Wayan, in the village of Laplapan just a few kilometres north of Ubud. The morning tour visits the markets and rice paddies before the group tackles six to eight dishes including satay, curries and vegetarian treats. Afternoon classes are also available (Jalan Raya Laplapan, Laplapan Village, Ubud Gianyar; +62 81 337 939095). Anika Balinese Cooking School at Tuban (just south of Kuta) is used by some cruise lines where classes can be taken during a port visit. (Jalan Elang No. 3, Tuba, Kuta; +62 361 9366133)

Arts & Crafts: Taking home your own handmade souvenir is a rare treat, but that's what's in store after taking a batik, art or craft class at Demika Arts & Craft Workshop. Run by Nyoman Deking in the village of Bedulu, 5 kilometres east of Ubud, a two-hour course teaches the ancient craft of batik painting, which involves applying wax to a fabric, painting the non-wax area of the cloth and soaking in hot water to remove the wax and reveal the masterpiece. Deking has taught batik for 40 years at an Ubud high school and is keen to pass on his skills to small groups of eight. He also offers wood-carving workshops and classes on silver jewellery making, Balinese art and weaving. Children love the experience. Transfers are offered from Ubud. (Jalan Marga Bingung Kelod, Bedulu Main Road; Gianyar; +62 08 3388 4892)