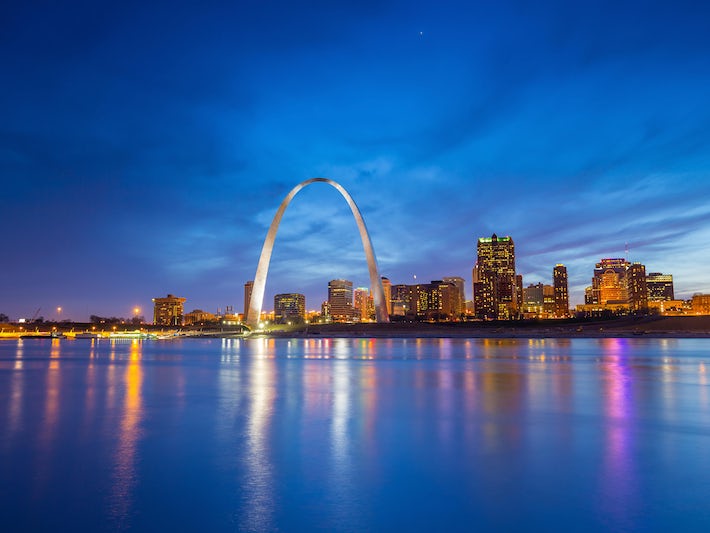 Find Things to Do in St. Louis on Viator

Popular Things to Do in St. Louis

Food and Drink in St. Louis

Ask a local where to go for the best barbecue in town, and you'll be directed to Pappy's Smokehouse, where it's all about the dry-rubbed ribs and pulled pork. This super casual eatery serves up heaping helpings for lunch and dinner. (3106 Olive St.; 314-535-4340; open Monday to Saturday 11 a.m. until the food sells out, typically around 7 p.m., Sunday 11 a.m. until food runs out, usually around 4 p.m.)

A St. Louis landmark, Blueberry Hill is a restaurant-cum-music club filled with pop culture memorabilia, including a life-sized statue of Chuck Berry. Berry, a St. Louis native, was the first person inducted into the Rock & Roll Hall of Fame. Located in The Loop, right next to the St. Louis Walk of Fame, Blueberry Hill offers Americana fare with a southern twist, including hamburgers, trout almondine, jerk chicken and more. Check out their online calendar for a schedule of concerts. (6504 Delmar Blvd.; 314-727-4444; open daily for lunch and dinner)

For more upscale fare, head to The Hill (near Forest Park) and LoRusso's Cucina, voted among the top Italian restaurants in the country by Zagat. LoRusso's menu includes risotto, veal saltimbocca, chicken spiedini and cioppino, among other options. (3121 Watson Road; 314-647-6222; open for dinner Tuesday to Sunday, as well as Sunday brunch from 10 a.m. to 1:30 p.m.)

Another upscale venue is Top of the Riverfront, a rooftop revolving restaurant located in the Millennium Hotel that offers 360-degree views of St. Louis. The eclectic cuisine is pricey, but keep in mind you're paying as much for the scenery as the food. Menu items include seared scallops, Missouri chicken, pork shank, St. Louis pepper steak, blackened grouper, eggplant Napoleon and cowboy ribeye. (200 South 4th St.; 314-241-9500; open for lunch Monday to Saturday 11 a.m. to 2 p.m., brunch Sunday 10 a.m. to 2 p.m., and dinner Wednesday to Saturday from 5 p.m.)

Bet you didn't know that the first ice cream cone was introduced to the world by St. Louis at the 1904 World's Fair. So when you're ready for dessert, head on over to Ted Drewes Frozen Custard on Route 66 for a taste of the thick vanilla custard the shop has been serving since 1930. (6726 Chippewa St.; 314-481-2652; open daily Valentine's Day to December from 11 a.m.)

The iconic Gateway Arch is St. Louis' most recognizable landmark. The Arch, built between 1963 and 1965, honors Thomas Jefferson's vision of westward expansion and the thousands of pioneers who began their journey to the west in St. Louis. From the top of the 630-foot monument, visitors get a spectacular 360-degree view of the city including the Old Courthouse, Busch Stadium and the Mississippi River. To get to the top of the arch, visitors ride a small tram car that fits five people. Space is tight and some find it a bit claustrophobic. It takes four minutes to get to the top and three to get back down. On busy days the wait for the tram to the top can be an hour or longer. Get there early to reserve your time slot. The Arch facility also offers a documentary on the Arch's construction, the Museum of Westward Expansion and a film entitled "Lewis and Clark: Great Journey West." (Open daily 8 a.m. to 10 p.m.)

Right across the street from Gateway Arch is the Old Courthouse where the Dred Scott case began its long journey through the American court system and where Virginia Minor's case for women's right to vote came to trial in the 1870's. Rangers conduct tours of the Old Courthouse every day on varying schedules. Check at the information desk upon arrival for the day's times. Free showings of a 17-minute film about the Dred Scott case are on offer throughout the day. (4th Street.)

Larger than New York City's Central Park, the 1,300-acre Forest Parknis one of the country's largest municipal parks and is home to many of St. Louis' major visitor attractions, including the zoo and art museum. A visitor's center offers lockers, food, self-guided iPod tours and bike rentals.

Located inside Forest Park, the Saint Louis Zoo is home to more than 19,000 animals and 656 species. Its newest exhibition, opened in 2013, is the Sea Lion Sound, a 1.5-acre habitat that includes a 35-foot-long underwater viewing tunnel and features 11 California sea lions and four harbor seals. Admission to the zoo and most exhibits is free. (Open Monday to Thursday 8 a.m. to 5 p.m., Friday to Sunday 8 a.m. to 7 p.m.)

Opened in 1881, the Saint Louis Art Museum houses more than 33,000 art pieces, including a large collection of postwar German art, as well as work by Rembrandt, Degas and Picasso. In June 2013, a new wing opened, adding more than 200,000 square feet of space, allowing for new galleries, more parking and two eateries. Admission to the museum is free; admission to featured exhibits is free on Friday. (Forest Park; open Tuesday to Sunday 10 a.m. to 5 p.m., Friday 10 a.m. to 9 p.m.)

Meet the famous Clydesdales of the Anheuser-Busch Brewery and try a variety of locally made brews. Brewery tours include the historic brew house, the stable, the cellar and packaging plant. A gift shop offers tons of branded items. Admission is free. (Open Monday to Saturday 10 a.m. to 4 p.m., Sunday 11:30 a.m. to 4 p.m.)

After you've sampled a couple Anheuser-Busch brews, head over to Busch Stadium, the city's main baseball stadium named for the brewery and home to the St. Louis Cardinals. Go behind the scenes on a stadium tour and see the radio broadcast booth, the World Series trophies and the dugout. From April through September, public tours are offered at 9:30 a.m., 11 a.m., 12:30 p.m. and 2 p.m. unless a home game is scheduled for that day.

Looking for more art? Check out the Museum of Contemporary Religious Art,, located on the campus of Saint Louis University. The museum houses an impressive collection of interfaith spiritual art, including works by Andy Warhol, Salvador Dali and Georges Rouault. Free admission. (Open Tuesday to Sunday 11 a.m. to 4 p.m.)

Just 15 to 20 minutes east of St. Louis is one of the United States' oldest prehistoric sites, the Cahokia Mounds. The 2,200-acre site preserves the remains of the largest pre-Columbian city north of Mexico. More than 100 mounds still exist, including the 100-foot Monk's Mound, the largest earthwork in North America. Visitors can view the orientation program, take a self-guided or professionally led tour and purchase a souvenir at the museum shops. There is little shade, so bring a hat and sunscreen. Insect repellent also is recommended. (Open daily 9 a.m. to 5 p.m.)