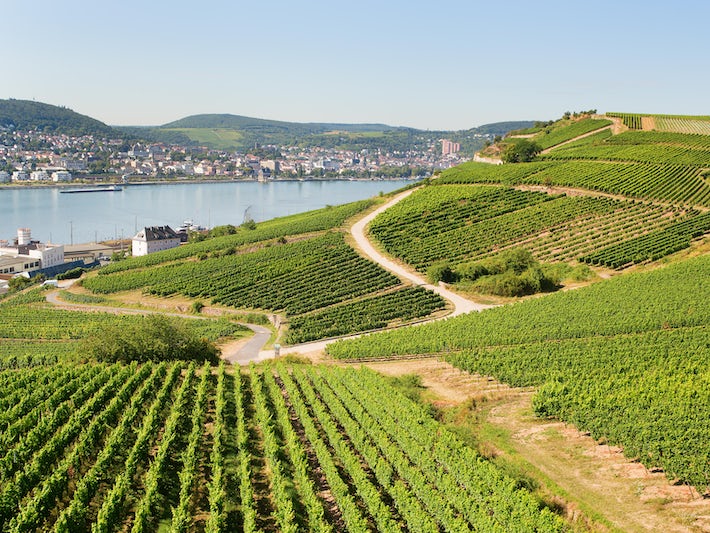 Find Things to Do in Rudesheim on Viator

Popular Things to Do in Rudesheim

Food and Drink in Rudesheim

Given its wineries' reputation for quality and the town's focus on tourism, Rudesheim provides visitors with an array of options for regional cuisine among its impressive number of eateries. Choose among cafes, restaurants and inns. In addition, seasonal vintners' taverns -- which are licensed to sell wine only at certain times of year (you'll be able to tell by the wreaths and brooms displayed outside) -- offer up dishes like Handkas mit Musik (mini cheeses marinated in a vinegar and onion sauce) and spundekas (seasoned cream cheese) alongside home-grown regional wines.

For heartier fare from the region, local favorite Restaurant Jakobusklause features Rhenish Goulash soup and cabbage dishes for less than 5 euros, as well as traditional German meat offerings like schnitzel and bratwurst for less than 15 euros. Jakobusklause has an extensive wine and beer list as well as a small outdoor biergarten, to boot. (Markt 23; +49 (0) 6722 48 313; open daily noon to 2 p.m. for lunch and 5 p.m. to 10:30 p.m. for dinner)

For mid-range prices on local fare in a weingasthaus (vineyard hotel), try Breuer's Rudesheimer Schloss. The house speciality is freshly prepared Hessian cuisine with a list of nearly 300 Rheingau wines -- including every vintage since 1929. The hotel is managed by the Breuer family, who own the hotel and the Georg Breuer wine-growing estate in Rudesheim. Starters include bone marrow dumplings in beef broth; mains could be fried local trout with almonds and potatoes or schnitzel in cream sauce with fresh mushrooms. (Steingasse 10; +49 (0) 6722 90 500)

For a gourmet meal, head further afield to the Michelin-starred Gourmet Restaurant Schwarzenstein, about three miles from Rudesheim in Johannisberg. The elegant restaurant is part of the Burg Schwarzenstein Hotel, and the resident chef serves modern European cuisine in a stunning setting with views over the Rhine Valley. The restaurant is enclosed by glass walls, which open on warm days to allow for al fresco dining. You'll need a reservation for this splurge. Adjacent to the restaurant, the Davidoff Smokers' Lounge offers cigars and spirits. (Rosengasse 32; +49 (0) 6722 99500; open Wednesday to Saturday for dinner, Sunday for lunch and dinner)

The biggest tourist draw in Rudesheim is the Drosselgasse ("choke alley"), a narrow, cobbled lane that runs through the heart of the town, connecting the main street -- Oberstrasse -- to Rheinstrasse, alongside the river. The pedestrian-friendly lane is crowded with restaurants, wine taverns and open-air biergartens that feature live music almost year-round -- from traditional German brass bands to DJs spinning chart-toppers. Dating to at least the 1400's, the Drosselgasse originally provided lodging for sailors and fishermen traveling the Rhine. Most of the original buildings along the Drosselgasse were destroyed by bombs in World War II, however, and rebuilt after 1945.

Bromserburg Castle, a more than 1,000-year-old structure that is the oldest castle in the Rhine Gorge World Heritage site, ranks as perhaps the most notable building in Rudesheim. The town bought the castle in 1941 and has turned it into the Rheingauer Wine Museum, which houses a collection of wine presses, glasses and other wine-themed pieces. (Rheinstrasse 2; open March 1 to November 1, daily, 9 a.m. to 6 p.m.; last admission 5:15 p.m.; English audio tour available)

The Niederwald, which means forest clearing or coppice, is a broad hill that rises to the east behind Rudesheim and is carpeted with vineyards producing some of the best wines in the Rhine Gorge region. Trails run through the vineyards and lead to a variety of sights within the Niederwald Landscape Park.

Atop the hill, above Rudesheim and the park, the Niederwaldenkmal (Germania monument) is an impressive monument constructed to commemorate the re-establishment of the German empire after the end of the Franco-Prussian War in 1871. The central figure on the monument is a 34-foot-tall statue of Germania, the personification of the German nation. Angels of peace and war flank Germania, and a bronze relief runs between them, showing Wilhelm I, the king of Prussia and the first German emperor, who unified Germany and laid the first stone in the foundation of the monument. The park can be reached by cable car from Rudesheim, by chairlift from the neighboring town of Assmannshausen or by trail on foot. Keep in mind that the trails are not an easy climb; they're steep and can be narrow. If you have the time, you can buy the "Ring Ticket," which gets you a trip up to the monument by cable car, down the other side of the hill to Assmannshausen by chairlift and back to Rudesheim by boat.

In keeping with Rudesheim's musical nature, Siegfried's Mechanisches Musikkabinett (Siegfried's Mechanical Music Cabinet) enjoys fairly heavy tourist traffic and is the best of the town's set of quirky museums. The museum is set inside the Bromserhof (a former residence of the aristocratic Bromser family) and houses three centuries' worth of paraphernalia related to automated musical instruments. The collection ranges from the tiniest music boxes to large orchestrated feats of musical engineering and is presented by knowledgeable guides. (Oberstrasse 29; open from March to December 10 a.m. to 6 p.m. daily and, by reservation, from 6 p.m. to 10 p.m.)

Eibingen Abbey is home to a community of Benedictine nuns who lead simple lives of work and prayer. The work they do is diverse, however, and the prayers they make are with a beautiful view over the Rhine Valley. Come here for quiet contemplation, to learn more about the church's patron saint -- Saint Hildegard von Bingen -- or to purchase some of the finely made crafts from the Abbey shop. (Klosterweg; +49/(0)6722/499-0)

Eibingen Abbey will help if your spirits are low, but if you're low on spirits, try the Asbach Distillery. The distillery in Rudesheim has been making premium German brandy or "Weinbrand" since the eponymous founder Hugo Asbach began the company in 1892. Perhaps the best-known use of the brandy comes in the form of Rudesheimer Kaffee -- a coffee drink made with fresh cream and Asbach Uralt. (Ingelheimer Strasse 4; +49 (0) 67 22/49 73 45)

The Mittelalterliches Foltermuseum (Medieval Torture Museum) is not for the faint of heart. The museum prides itself on being "educational and enlightening" and claims its mission is to remind visitors that, even today, torture is practiced with surprising regularity. After presenting published records of modern-day torture, the museum unveils its comprehensive collection of pain-inducing instruments -- among them thumb screws, a guillotine, chastity belts and something called a three-beamed harrow. (Oberstrasse 49-51; +49 (0) 67 22 / 4 75 10; open Monday-Friday from Easter through October 31, 10 a.m. to 6 p.m., Saturdays and Sundays and the winter hours, from 1 p.m. to 5 p.m.)

If you need to find a safe, happy place to retreat after your visit to the torture museum, head straight over to the Rudesheim Toy Museum. The toy and railway museum displays children's toys from the past 100 years. It's the perfect antidote to terrifying and grisly tales of torture, and the centerpiece, a large-scale mid-20th century model railway presents a room-sized Rhine train route from Rudesheim to Koblenz. (Peterstrasse 20; +49 (0)6722 4024777; open Monday-Friday from 8 a.m. to 6 p.m., Saturdays and Sundays, from 11 a.m. to 6 p.m.; closed on weekends from January to March)