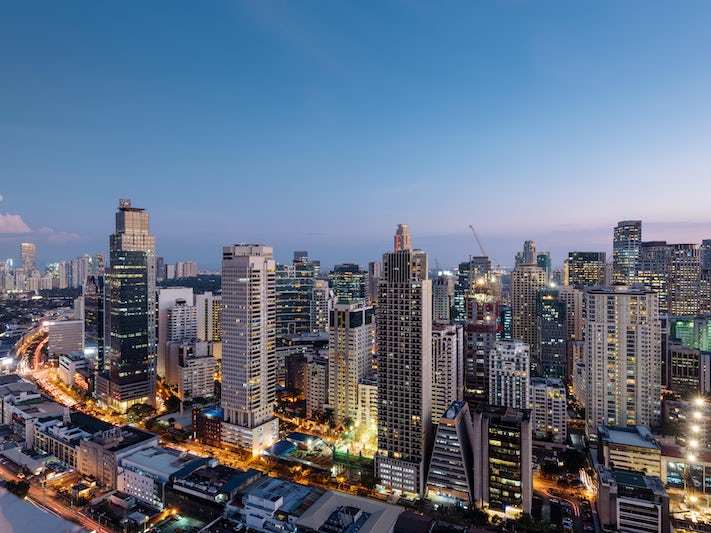 Find Things to Do in Manila on Viator

Popular Things to Do in Manila

Food and Drink in Manila

Filipino dishes like Bistek Tagalog and Kinilaw (the local take on ceviche) might be little known around the world, but the local cuisine's delicious blend of Malay, Chinese and Spanish influences deserves to be discovered.

Sweet and savory often go head to head among the flavor combinations of popular dishes like ensaymadas (a cheesy, sugared breakfast pastry) and tangy adobo -- a stew most often made with chicken and pork.

Get ready to feast till you are beyond full. Buffets are big business there, allowing you to try numerous dishes and go back for more.

Spiral: Take the buffet at Spiral in the Sofitel Philippine Plaza, for example. This magnificent dining room is the centerpiece of the grand hotel, set along the waterfront of Pasay City, a short taxi ride from the port. This is considered one of city's top dining spots with a vast, almost overwhelming array of both Filipino and international cuisine. (CCP Complex, Roxas Boulevard, Pasay City; 632-551-5555; www.sofitelmanila.com)

Cafe Adriatico: For something a little more low-key, head to the nearby Mall of Asia for a seafood lunch overlooking the water at Cafe Adriatico, or head to the bustling food court for a super affordable fast feed. (Second Floor, Entertainment Section of SM Mall of Asia in Pasay City; +632-556-0608; Monday to Sunday, 10 a.m. to 11 p.m.)

Ilustrado: If you fancy dining among the atmospheric surrounds of the historic Intramuros area, then Ilustrado is a safe bet. Several heads of state from around the world have dined at this courtyard restaurant, which serves Spanish, Filipino and international cuisine. Specialties include Paella Ilustrado, Callos Madrilena (Madrid-style tripe) and lengua con setas (ox tongue with mushrooms). (744 Calle Real del Palacio, Intramuros; +632-527-3674; www.ilustradorestaurant.com.ph)

Cafe Juanita: If you're willing to make a longer journey, take a taxi for the 45-minute ride to Pasig City, where Cafe Juanita serves up homestyle Filipino cooking in a flamboyant setting. There, you'll find dishes like asohos (a type of fish) cooked in crab fat sauce and kare kare ni Juanita (oxtail and tripe stewed in peanuts and toasted rice with tropical vegetables). (19 West Capitol Drive, Pasig; +632-632-0357)

Intramuros: The old walled city of Intramuros, the heart of colonial Spanish Manila, is an easy and obvious excursion located a short cab ride or a reasonable walk from the cruise port. The crumbling walls mixed with well-preserved ruins provide a snapshot of Manila in times gone by, with the stone walls unchanged since they were built more than 400 years ago. It's filled with enough fascinating history to keep you occupied for a few hours.

It is home to Manila's number-one tourist attraction, Fort Santiago, as well as the Rizal Shrine -- a museum dedicated to national hero Jose Rizal. Then there's the church of San Agustin, a small visitor center and ample opportunities to play tourist with a ride in a horse and cart.

Makati: For a look at the Manila of the future, head to the financial district of Makati, where, among the gleaming high-rises, you can  enjoy high tea at the iconic Peninsula Hotel before heading to the Ayala Museum to explore the extensive collection of pre-Hispanic gold or the diorama exhibition of Philippine history.

Taal Volcano: Just 90 minutes south of the city, the Taal Volcano in Tagaytay rewards those who make the hike to its caldera with some of the best views in the country. There, you can take a boat ride across the lake to Volcano Island, where you can trek or horse ride to the main crater. Although it's the smallest in the world, it's still an active volcano. (It's closely monitored for any activity.)

Corregidor Island: Take an hourlong ferry ride out to Corregidor Island in Manila Bay to discover Manila's WWII history. An important line of defense during the conflict, it was surrendered to Japan in 1942 before being recaptured in 1945 by the Allied forces, who then made it their headquarters. Now the island is a historical monument with a Pacific War Memorial and a number of murals that depict battle scenes from the nation's history.

But it's not just about the past. The island is also home to wildlife, forests and even a beach offering visitors the chance to get back to nature.

Pagsanjan Falls: More adventures can be had in the district of Laguna, 2.5 hours south of the capital, where you can hike to the nearly 300-foot-tall (91-meter) Pagsanjan Falls, or take a scenic one-hour boat ride up the Bumbungan and Balanac Rivers passing spectacular scenery and wildlife on the way. Take a dip in the plunge pool, dry off on a rock, and then take a bamboo raft behind the falls before tackling the rapid rush of the ride back down.