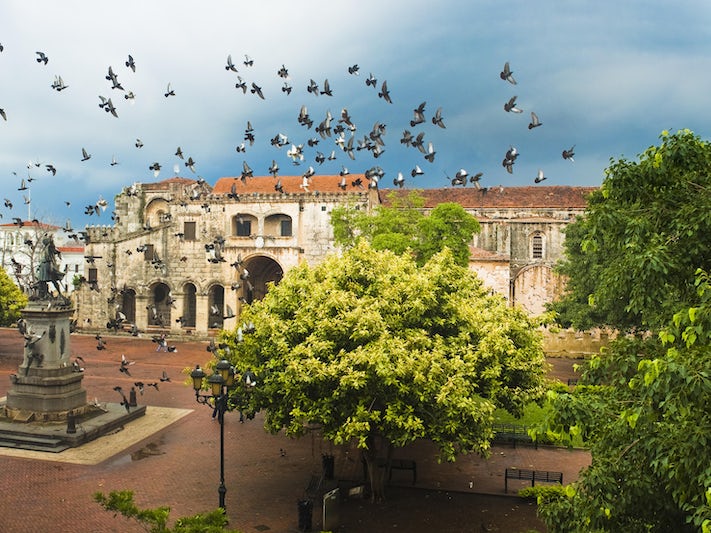 Popular Things to Do in Santo Domingo

Santo Domingo is the capital of the Dominican Republic, and while there are a few sights worth exploring there, most cruise ships don't stay in port for long. Due to time constraints and the city's reputation for poverty and crime, a shore excursion is the best option to explore. Consider an excursion to Zona Colonial to check out historic sights or hit the beach at Boca Chica to see how the locals enjoy the island. You might even take a quick trip to see Christopher Columbus' tomb. Definitely pick up some authentic Dominican food for lunch -- that alone will be worth getting off the cruise ship.

Santo Domingo is hot and humid year-round. Winter is the most popular time to visit, thanks to slightly milder temperatures. Currency is the Dominican peso, but most vendors will gladly accept U.S. dollars. Spanish is the official language.

Find Things to Do in Santo Domingo on Viator

Food and Drink in Santo Domingo

Authentic Dominican food is generally locally grown and produced. You'll find there's an emphasis on chicken and freshly caught fish, rice and beans, and fruits like coconuts and plantains. Many residents operate stands that offer homemade items like bread and empanadas. Drinks native to the area include fresh fruit juices, Dominican coffee and hot chocolate, Kola Real soda and -- for those looking for a bit of an alcoholic kick -- Mama Juana, Presidente beer and local rum. There also seems to be a surplus of Italian fare in the DR.

Adrian Tropical: At this place, you'll get amazing local fare and views of the waves, thanks to its oceanside location. We highly recommend the tostones (fried plantains), arroz con frijoles rojas (rice and red beans) and bistec con cebolla (steak with onions). For some refreshment, try sorbet in mangola (mango) or chinola (passion fruit), or order a pina colada, but be warned that the alcoholic versions can be a bit strong. Menus are in Spanish only, and your waiter might not speak English. (2 Avenida George Washington; 809-221-1764)

Vesuvio Malecon: If you're not into traditional Dominican cuisine, you'll do well at Vesuvio Malecon, which serves Italian fare. You can't go wrong with fresh oysters or prosciutto with avocado for starters. Then, try the Mediterranean-style Caribbean lobster or the risotto with shrimp and squid, and finish up with German chocolate cake for dessert. (521 Avenida George Washington; 809-221-1954; open daily noon to 1 a.m.)

El Conuco: With seven different dining rooms to fit your tastes, El Conuco offers a large menu that centers on traditional Dominican Creole fare. Try appetizers like fried codfish or yucca; soups like chickpea stew; entrees like goat with oregano and tomato sauce, or yellow rice with shrimp and Spanish sausage; and an assortment of desserts. (152 Casimiro de Mora, Gazcue; 809-686-0129)

While you're in town, be sure to try some Mama Juana. Made by combining red wine, rum and honey with the fermented roots of the Mama Juana tree, it gives off a strong red wine taste with a spicy cinnamon finish. If you're not a wine drinker, try the Barcelo or Brugal local rum with Coca-Cola, or Presidente beer, which is super refreshing when the weather gets unbearably hot. (You'll also want to pick up some sugar cane juice, which is locally made and owns a reputation as a great hangover remedy.)

Boca Chica: Located in the town of Boca Chica, about a 30-minute drive from Santo Domingo, this beach is great for swimming, grabbing a bite to eat and mingling with locals. There are food stalls, upscale restaurants and shaded tables for dining. Water sports equipment is available for rent. Be careful with your valuables while you're swimming, however.

Juan Dolio: About an hour's drive from Santo Domingo, Juan Dolio is a simple beach that's great if you'd like a bit more peace and quiet than what Boca Chica has to offer. Within walking distance of Juan Dolio is Playa Guayacanes, which offers a similar ambience.

Zona Colonial (Colonial City): Dating to 1498, this area of Santo Domingo is a UNESCO World Heritage Site. It houses the Americas' first cathedral, hospital and fort, as well as the palace of Diego Columbus, Christopher Columbus' son, who originally governed the Spanish colony there. You'll also find dining options that range from tiny cafes to the Hard Rock Cafe, as well as an array of shops on El Conde, the area's main retail street. It's within walking distance of the cruise port, but it's much easier (and safer) to take a shuttle or taxi.

El Faro a Colon (Christopher Columbus Lighthouse and Tomb): The remains of Christopher Columbus are said to be housed about a five minutes' drive from the cruise dock. (Seville, Spain, also claims to have possession of the explorer's remains. The debate rages on.) The tomb, which is marked by an impressive monument and lighthouse, also served as the site of Pope John Paul II's visit during the celebration of the 500th anniversary of Columbus' arrival in the Americas. His "Popemobile" is still on display there. Both attractions can be reached on foot by ambitious cruisers, but it's not recommended. Instead, grab a taxi or shuttle if you haven't booked a city highlights tour. There is a nominal fee to enter. (Avenida Ana, Sansouci District; open Tuesday to Sunday 9 a.m. to 5:30 p.m.)

Los Tres Ojos (The Three Eyes): In Mirador del Este Park, you'll find Los Tres Ojos cave. Made of limestone, the cave contains three main clear pools or lakes -- the "eyes" for which the cavern is named. It's just a 15-minute drive from port, and it's very inexpensive to enter. You will, however, have to pay extra to take a trip to the cave's fourth pool, which does exist, despite the cave's name. (809-788-7056)

Local Overview Tours: You'll save money if you take a tour with a local guide like Prospero Guillermo Rodriguez ("call me Chino"), who offers private excursions in Santo Domingo and La Romana (Casa de Campo) for reasonable prices. In addition to English, he also speaks his native Spanish, as well as Italian and French. Call 809-518-1309 (p) or 809-973-0272 (c) to make arrangements. We took a tour with him and were able to book him for more than three hours and tailor the trip to the highlights we wanted to see.

The Malecon: This oceanside promenade, located along Avenida George Washington (George Washington Avenue), is a pleasant place to explore restaurants and casinos. If you catch a taxi or shuttle from port, keep an eye out for the Male Obelisk (designed to look like the wings of a pigeon, the symbol of the free world) and Female Obelisk (erected in memory of Santo Domingo) along the way. It's a great place to visit if you'd like a leisurely day ashore, but be sure to leave jewelry and unnecessary valuables in your cabin.

Boca Chica: The town of Boca Chica is about 30 minutes from your ship by taxi, and it's a nice place to spend a day shopping or getting to know the locals on the beach of the same name. You'll find both upscale restaurants and stalls selling traditional Dominican fare. You'll have to take a taxi to get there if you're not on a prearranged tour that includes a stop.

Museo Naval de las Atarazanas (Marine Museum): If you're a history lover, check out this marine museum, which houses artifacts recovered from ships that sank in the 1500's and 1600's. You can also learn all about the history of such shipwrecks, as well as the D.R.'s efforts to recover and preserve them. There is a nominal fee to enter, but children and students are free. (4 Calle Colon, Colonial Zone; open Monday to Saturday 9 a.m. to 5 p.m., Sunday 9 a.m. to 1 p.m., closed Wednesdays)

Casa de Campo: At this tourist haven resort in La Romana, you can golf at the world-famous Teeth of the Dog course, laze on the beach, take part in one of several water sports, go horseback riding or play tennis. You'll also find a beautiful marina, as well as plenty of shops and places to grab a bite to eat. You'll need a full day in port for this one, though; the ride from the Santo Domingo cruise pier is 90 minutes each way. If you're not on a prearranged excursion, you'll have to pay an entry fee, which doesn't include activities at the resort. (Carretera La Romana, Higuey; 855-877-3643; open seven days a week)