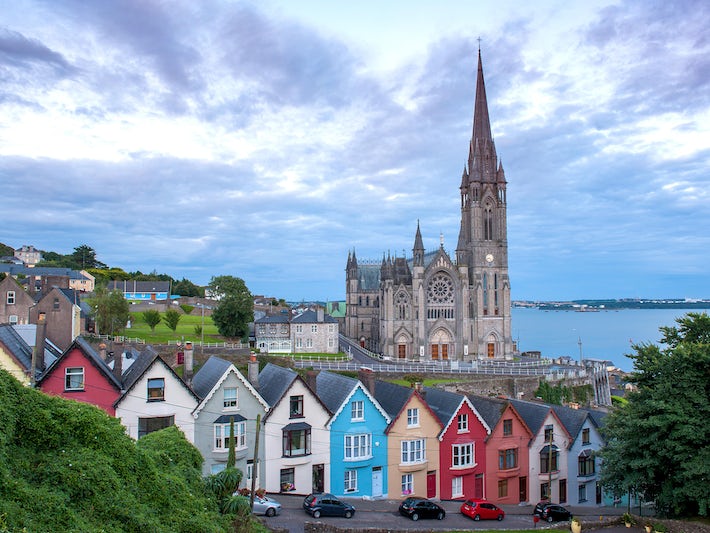 Find Things to Do in Cobh (Cork) on Viator

Popular Things to Do in Cobh (Cork)

Food and Drink in Cobh (Cork)

Though Irish food is homely and hearty, the country is perhaps more famous for its alcoholic beverages. World-famous dark stout Guinness is top of the list. Ask for a "glass" if you can't cope with a pint. County Cork is the home of Murphy's (similar to Guinness), while Irish Whiskeys and liqueurs are worth a try. One of the most popular is Bailey's Irish Cream, a mix of whiskey and cream, while Irish coffee is also made with whiskey and cream.

Gilbert's Bistro in the Square: There, you can enjoy contemporary Irish food served bistro-style in a relaxed setting. Every dish is cooked to order. Expect dishes like black pudding served with seasonal leaves and a cider apple dressing or jumbo prawns in garlic. (Pearse Square, Cobh; 21 481 1300; open 8 a.m. to 10 p.m., Monday to Friday, 9 a.m. to 10 p.m. Saturday and 9 a.m. to 9 p.m. Sunday)

Cobh Museum: This small museum is housed in a former Church built in 1854. It's known as the Scots Church because of the number of Scottish people in the congregation. Exhibitions there reflect Cobh's cultural, social and maritime history and feature photographs of the town, model ships, 19th-century paintings and watercolors, including sketches by Queen Victoria of the harbor. The town was the last port of call for RMS Titanic, and the Museum holds the last written record for the ship in the pilot's log book. (Scots Church, High Road, Cobh; 21 481 4240; open April to October, Monday to Saturday, 11 a.m. to 1 p.m. and 2 p.m. to 5:30 p.m and Sunday from 2:30 p.m. to 5:30 p.m.) Admission is 4 euros.

The Queenstown Story: This dramatic multimedia exhibition, located in Cobh's restored Victorian railway station, tells the history of this port town. Visitors can retrace the steps of the 2.5 million adults and children who emigrated from Ireland to find a better life and discover a little about what it must have been like onboard the convict ships that left Cobh for Australia in 1801. Learn more about the sinking of the Lusitania off the coast and about the survivors and bodies that were brought to this small community. Listen to the story of Annie Moore and her two brothers, who left Cobh to start a new life in America, and how she was the first ever emigrant to be processed at Ellis Island. (The Old Railway Station, Cobh; 21 481 3591; open from 9:30 a.m. to 5 p.m. January 3 to April 30, 9:30 a.m. to 6 p.m. May 1 to October 31, 9 a.m. to 5 p.m. November 1 to December 22)

Titanic Experience: This permanent visitor attraction is located in the original White Star Line Ticket Office in the heart of Cobh. It's where 123 passengers boarded Titanic on the fateful maiden voyage to the U.S. The story of Titanic is told through the eyes of the Queenstown (now Cobh) passengers. (White Star Line Building, 20 Casement Square, Cobh; 21 481 4412; open 9 a.m. to 6 p.m., Monday to Sunday)

The Titanic Trail: This is a guided walking tour of approximately one hour, which uncovers the historical legacy of Cobh and the harbor. Learn about the last days of Titanic, the heart-wrenching tragedy of the sinking of the Lusitania and the town's fascinating and varied history. See the pier Titanic departed from, and learn the story of Spike Island and convict transportation. At the end of the walk, a complimentary sample of local beer is served in Jack Doyles, one of Cobh's most traditional Irish Bars. (Trail departs from Commodore Hotel Westbourne, Cobh; 87 276 7218; leaves 11 a.m. and 2 p.m., Monday to Sunday)

Fota Island Golf Club: A 15-minute taxi ride from the pier takes golfers to this 18-hole parkland course, the venue for the 1997 Amateur Irish Open and the Smurfit Irish PGA Championship. There are clubs and carts for rent. Call first to check that the course is open for visitors. (21 488 3700)

Harbor Trips: One-hour tours of Cork Harbor start from Kennedy Pier. During the trip, you'll see the Martello Towers, which were built and used by the British Empire in the 19th century, and Spike Island, where convict hulks were moored. Trips operate daily throughout the year. (James Scott & Company, Westlands House, Rushbrooke, Cobh; 21 481 15 49)

Shopping: Most shops in Cobh -- mainly independent stores -- are located around the Post Office and the promenade. Don't expect large department stores or chain stores, but there are lots of shops that sell craft items and souvenirs. These include Christys Irish Store at Cobh Heritage Center and the Tregan Craft Center next to Titanic Experience. If you're a follower of fashion, best take a trip to neighboring Cork. It has most of the High Street names, as well as independent shops. If you're after a bargain, try Dunnes Stores or Penneys. (The latter is called Primark in the U.K.) Most stores in Cork city do not open before noon on Sundays.

Cork City: Located 12 miles from Cobh, this is the Irish Republic's second-largest city. Visit the Crawford Art Gallery, the Huguenot Quarter, the Opera House and Elizabeth Fort, a British built structure dating back to the 1500s and built in a vain attempt to keep Cork's citizens in order.

St. Colman's Cathedral: The Cathedral stands on a high vantage point overlooking town. Its structure features a 100-meter-high spire and a tower with a 42-bell carillon, the largest in Ireland.

It also includes Ireland's largest bell (3.6 tons), named St. Colman. The carillon is played from a console in the belfry, consisting of a keyboard and a pedalboard.

Cuskinny Marsh: This is a bird sanctuary where hundreds of varieties of our feathered friends swim and breed. The Marsh is situated on the Tay Road, the name of which has an interesting history. Long ago, two French families who lived in Cuskinny House and Marinho Point would meet every weekend for tea. Locals pronounced "tea" as "tay," hence the name of the road.