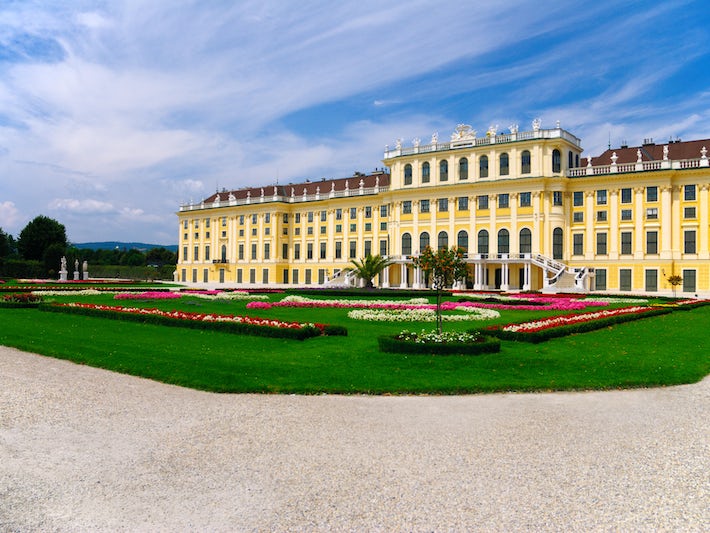 Find Things to Do in Vienna on Viator

Popular Things to Do in Vienna

Food and Drink in Vienna

Vienna is all about the food, whether it's the exquisite pastries beckoning from glass display cabinets in every cafe, or a giant platter of Wiener schnitzel, the city's trademark dish of lightly breaded veal served with parsley potatoes and a twist of lemon. In recent decades, the city also has seen an explosion of alternatives, with Michelin-starred restaurants, Indian, Thai and Turkish outlets and gourmet vegetarian venues.

Locals queue up outside Trzesniewski, a Polish sandwich shop on Dorotheergasse. You buy bite-sized open sandwiches on black bread, each one packing a punch thanks to liberal doses of paprika and pickle, washed down with a tiny glass of beer. The place is a city institution. (Dorotheergasse 1; open Monday to Friday 8:30 a.m. to 7:30 p.m., Saturday 9 a.m. to 5 p.m.)

Sample the perfect Wiener schnitzel at Plachutta zur Oper, near the opera house. As well as being famous for its schnitzels, this elegant spot is a favorite for power-lunching locals. (Walfischgasse 5-7; open daily from 11 a.m. to 12:30 a.m.)

Don't miss the experience of a traditional Viennese coffee house. They're everywhere, and each one has its own following. Every coffee house serves coffee from an extensive menu and cakes from a mouth-watering display, but many have wider menus for lunch or dinner. Some are rich in history; Caf? Leopold Hawelka is a tiny, dark, crowded room, the walls plastered with sketches and drawings offered by artists too poor to pay for their coffee. (Dorotheergasse 6; open Monday to Sunday 8 a.m. to 2 p.m., holidays 10 a.m. to 2 p.m.) Cafe Frauenhuber claims to be the city's oldest, where Mozart made his final appearance as a pianist on March 4, 1791. (Himmelpfortgasse 6; open Monday to Saturday 8 a.m. to midnight, Sundays and holidays 10 a.m. to 10 p.m.) Walk to the rear of Demel and gaze through the glass wall at the show kitchen, a mesmerizing and mouthwatering experience for the baking enthusiast. (Kohlmarkt 14; open 9 a.m. to 9 p.m.)

No competition: It's the Aperol Spritz, which is the cocktail to be seen sipping in Vienna. An import from Venice, this drink is a mix of white wine, soda water and the bitter, herbal aperitif Aperol, served over ice with a slice of orange. Everybody drinks it all summer long.

The gothic St. Stephen's Cathedral (Stephansdom) defines the skyline of Vienna, with its huge bulk and colorful tiled roof, bearing the Habsburg coat of arms. Visit the catacombs, or climb 343 steps to the top of the south tower to enjoy 360 degree views of the city to the Vienna Woods beyond. (Stephansplatz 1; open 8:30 a.m. to 8 p.m.)

The Museumsquartier (Museumsplatz 1), a redevelopment of the 18th-century imperial stables, is a collection of superb museums. The cultural district features the Leopold museum (open 10 a.m. to 6 p.m., Thursday 10 a.m. to 9 p.m., closed on Tuesday), the Museum of Modern Art (open Monday 2 p.m. to 7 p.m., Tuesday to Sunday 10 a.m. to 7 p.m., Thursday to 9 p.m.) and the Kunsthalle (open daily 10 a.m. to 7 p.m.), an exhibition center. The whole complex contains bars, restaurants and grassy areas, and during the summer, hosts live events, from bands to fashion shows.

The Haus der Musik is one of the finest interactive museums in Europe, exploring the history of Vienna in the context of classical music. There are scientific rooms to demonstrate the physics of sound; rooms where you can compose your own melody and have it played by an orchestra; rooms dedicated to the most famous composers (including a poignant exhibit where you can experience Beethoven's decline into deafness); and the highlight, a chance to "conduct" the Vienna Philharmonic. Warning: If you're not up to snuff as a conductor, you could be booed off by the virtual orchestra.

The Spanish Riding School, one of the world's most famous schools of equestrian art, is closed in July when the renowned Lipizzaner stallions go out to grass, but you can get tickets online for training sessions and performances at other times of year. (Michaelerplatz 1; open Tuesday to Sunday 9 a.m. to 4 p.m., Fridays when there is a performance 9 a.m. to 7 p.m.)

Hear the Vienna Boys' Choir sing every Sunday at the Hofburgkapelle (Hofmusikkapelle, Hofburg) apart from in July and August, when they're on summer break. Tickets are in great demand; book early.

In April, May, June and September, anybody can watch one of the approximately 150 performances at the Vienna State Opera for free on a giant screen outside the opera house on Herberg-von-Karajan-Platz. Attendants even provide rugs for spectators to sit on.

At Schonbrunn Palace, you can tour dozens of rooms, including the magnificent apartments once occupied by Emperor Franz Joseph and his wife Elisabeth, as well as those that belonged to Maria Theresa, the powerful Habsburg ruler. Outside the palace are sweeping Baroque gardens, fountains, a maze, greenhouses, a carriage museum and even a zoo.

Take a trip out of town to the Zentralfriedhof, one of Europe's biggest cemeteries, with more "residents" than Vienna itself. This is not as macabre as it seems. The cemetery is exceptionally tranquil and beautiful, with impressive Art Nouveau architecture, and all the graves of the city's famous musicians are clustered together: Beethoven, Schubert, a memorial to Mozart (who was buried in a pauper's grave) and the entire Strauss family. (Opening hours vary by season; summer hours are 7 a.m. to 8 p.m. daily.)

Check out the Naschmarkt, the city's most colorful food market, with all kinds of artisan products. Try a balsamic tasting or munch on Vietnamese spring rolls. In summer, buy giant peaches and bunches of plump cherries for snacks. (located just outside the Ring; open early daily.) There are some great, quirky shops nearby; designer vintage at Flo Vintage on Schleifmuhlgasse, or handmade herbal remedies at Saint Charles Pharmacy on Gumpendorferstrasse.

Visit the Prater, the world's oldest amusement park. The park is a huge green space used by the Viennese for recreation outdoor activities, such as picnics and cycling, as well as for the many rides. It's open 24 hours a day, seven days a week, year-round. Individual attractions have their own opening hours, and you pay for each ride individually with fees starting around 1.50 euros. The biggest attraction is the giant Ferris wheel, the Riesenrad for spectacular views across the city. It's open in summer from 9 a.m. to 11.45 p.m. The Prater is easily accessible by subway (U-Bahn), with Praterstern on the U1 line the closest stop.

Stroll the streets of Spittelberg, the up-and-coming district just beyond the Museumsquartier. The neighborhood features beautiful Biedermeier houses and hidden squares. This is one of the city's main art and design districts, with trendy cafes and small, one-off boutiques.

Take a Third Man tour, following the locations of the famous 1949 Orson Welles' film, including the city sewers and the famous Riesenrad (Ferris wheel) in the Prater.