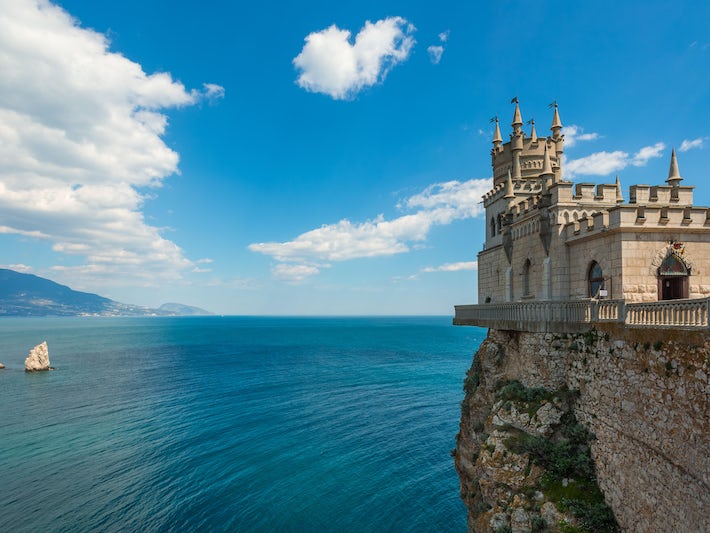 Find Things to Do in Yalta on Viator

Popular Things to Do in Yalta

Food and Drink in Yalta

Yalta offers international restaurants and fast food eateries that will appeal to all tastes, along with plenty of local specialities. A typical lunch is pelmeni, steamed dumplings filled with meat, and Crimea is famous for its red onions, which have a sweet taste and are considered something of a delicacy. You'll find plenty of fish dishes on the menus, and don't forget to try some local wine or maybe a shot of ice cold vodka. Many restaurants catering to tourists are clustered around the port area and serve decent, if not gourmet, food.

Opened in 1907, the Oreanda Hotel is a landmark property, and it's worth paying a bit more to dine in the first-floor Oreanda Restaurant for the views over the Black Sea. For a more inexpensive and casual option, the hotel operates the La Siesta cafe on the beachfront. (35 Lenina Street; open from breakfast through to 11 p.m.)

More upmarket meals with a sea view can be found at the Grand Terrace Restaurant at Villa Elena, where the menu includes a Black Sea fish of the day and there is an open-air terrace. (3A Morskaya Street; open for lunch from noon.)

There's a fun, relaxed atmosphere at Khutorok la Mer, with its bright cushions on the outside terrace and ship-like interior in the main restaurant. It serves a combination of Ukrainian and European food, and lamb is a speciality. (Sverdlov Street 9; open from 10 a.m. until late)

Perched on a cliff top overlooking the Cape of Ai-Todornot outside Yalta, the Swallow's Nest is the region's trademark sight. Originally a wooden building, the present Gothic fairytale castle was built by a German oil magnate in 1912, supposedly to house his mistresses. The best views of the castle are from the dedicated viewing platform. Many shore excursions include a visit to the castle. Otherwise, the only other way to reach it from Yalta is by bus, taxi or boat. Visitors arriving by boat can climb up the hill from the landing beach and walk around the outside of the castle.

Located up steep winding roads three miles from the port, the stunning white Italianate Livadia Palace is famous as being the site where the United States, Great Britain and Soviet Union met in 1945 to redraw Europe's map after World War II. The palace was built in 1911 by Czar Nicholas II as his summer residence, Now, the ground floor is devoted to fascinating documents and photos from the Yalta Conference and includes iconic pictures of the remarkable meeting between Winston Churchill, Joseph Stalin and Franklin Roosevelt (they're shown deep in conversation). In complete contrast, the upper floor gives an insight into the life of the tsar and his family at the opulent palace. (Open 9 a.m. to 5 p.m. daily, except Wednesday.)

A curious combination of an English castle and Moorish fortress, the Alupka Palace also known as Vorontsov Palace, is considered one of the finest achievements of Russian architecture. Twelve miles from the port and set against a backdrop of mountains and cypress trees, it was built by Prince Vorontsovsky in 1830, with the input of English architect Edward Blore, who designed part of Buckingham Palace. Features include the flight of steps leading down toward the sea where marble lion statues, in particular a sleepy king of the jungle, provide a great photo opportunity. Winston Churchill stayed at Alupka during the Yalta Conference. (Open from 9 a.m. to 5 p.m., closed on Monday.)

Alexander Nevsky Cathedral is less than a mile from the port and easy to spot with its gold onion domes. It is one of the few sights that can be reached on foot and not usually featured on cruise excursions. It's named after the Russian patron saint and features a rich interior filled with icons. (Sadovaya Street 2; normally open from 9 a.m.)

Garden enthusiasts won't want to miss Nikitsky Botanical Garden in Nikita, believed to be one of the world's oldest botanical gardens and now an important horticultural research center. Some five miles from the cruise terminal by the shores of the Black Sea, the 500-acre gardens were founded in 1812 and are famous for a rose collection spanning more than 2,000 varieties, trees from around the world and 18,000 species of plants. (Open 9 a.m. to 6 p.m.)

The celebrated Russian writer and dramatist Anton Chekhov lived in Yalta for five years and penned works including "The Three Sisters" and "The Cherry Orchard" during his time in the city. "The Lady with the Little Dog" was inspired by a woman he saw walking along the promenade. His former house is now a museum and includes all kinds of artifacts connected to his life and work, from items of clothing to his piano, photos, theater programs, manuscripts and books translated into different languages. (112 Kirov Street; open daily 10 a.m. to 5 p.m. except Monday and Tuesday.)

Military history enthusiasts can visit strategic Crimean War sites on the peninsula 32 miles west of Yalta, including the site of one of the most legendary and ill-fated events in British military history, the Charge of the Light Brigade. In Sevastopol, Russia's main naval base on the Black Sea, the circular Panorama building was constructed to house the epic panoramic painting "The Defense of Sevastopol" in 1855. From here, visitors can travel to Sapoune Heights where Lord Raglan looked down on the "valley of death" where the Battle of Balaclava and the Charge of the Light Brigade took place. These sights can be visited during a one-day port call.

Ten miles outside Yalta, the pretty coastal resort of Gurzuf provides a change of scenery with its narrow cobbled streets and attractions, including the ruins of a 6th-century fortress and distinctive rock islands that rise out of the sea close to the shore.

Drink in the local history at the Massandra Winery, a 10-minute drive from the center of Yalta. Renowned for its fortified and sweet wines, Massandra is the oldest Crimean winery and dates to 1894. Its cellars were created in underground tunnels hewn into the mountains, and during the 1917 Russian Revolution, the stocks were saved by walling up the entrances. The winery offers a variety of tours and tastings from 10 a.m. to 5 p.m.

It's worth walking to the far western end of Lenin Promenade to check out Pushkinskaya Street. The main shopping boulevard is lined with fountains, statues and a mix of local shops and galleries for those who seek variety away from the more obvious souvenir shops.