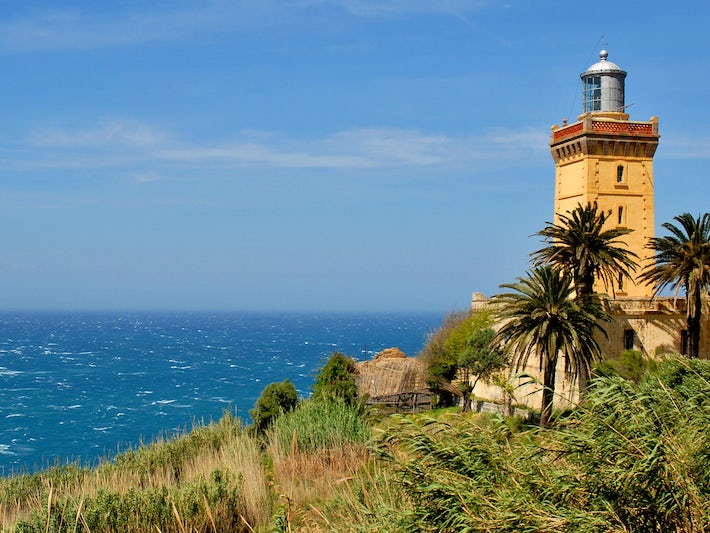 Find Things to Do in Tangier on Viator

Popular Things to Do in Tangier

Food and Drink in Tangier

Traditional Moroccan cuisine includes cous cous, tajines, pastilla (a meat-filled pie) and harira (soup). Vegetarians can find a good variety of meals in Tangier, but if you are tempted by a vegetarian tagine, be aware that they are often made with lamb stock. As far as drinks, mint tea is very refreshing. Yogurt is sometimes mixed with avocado and almonds, or fruit mixtures. Squares of chickpea cake sprinkled with salt and paprika are also worth a try. Moroccan men tend to socialize in cafes. They gather to drink sweet mint tea as they go about their business.

Darna Restaurant: This establishment is run by the Darna Women's Community Centre. The restaurant's chefs prepare traditional Moroccan dishes using seasonal produce. For a taste of local life, you can do no better. In spring and summer, guests eat on the patio beneath the shade of fig trees. (Rue Jules Cott, Grand Socco; 0539 94 70 65; open mid-day to 3 p.m. Monday to Saturday)

While Tangier doesn't have a wealth of galleries or museums for visitors, it doesn't really need them because the city itself is a living attraction.

Shopping and Exploring: The medina, a confusing labyrinth of winding, mainly pedestrian alleys is where Barbara Hutton, heiress of the retail store chain Woolworth, once had a home. A teeming maze of furtive passageways, this city-within-a-city with more than a whiff of ancient intrigue, is bursting with stalls spilling over with goods. The boulevard Mohamed V is where to find clothes shops, pharmacies and cafes, while Mohamed VI runs along the beach front with its hotels, bars, night clubs and restaurants.

The Kasbah Museum: This was once the former sultan's palace. The museum houses artifacts from Phoenician to modern times as well as finds from Roman sites, displays explaining Tangier's complex history and a section devoted to local arts. The Fes Room is where to see silks, manuscripts and centuries-old ceramics. (Place de la Kasbah; 0539 93 20 97; open 9 a.m. to 4 p.m., closed Tuesdays)

Menoubia Gardens: Outside the walls of the Kasbah, are the peaceful and shady Menoubia Gardens with stupendous views of the port and an 800-year-old banyan tree. Check out the 30 bronze ship cannons that date to the 17th century. (Av. Sidi Bou Araqia; open daily except Sundays)

Tangier American Legation Museum: The Tangier American Legation Museum is the oldest American overseas legation, or foreign diplomatic mission. The museum houses documents that look at the history of relations between Morocco and the United States since 1776, including letters written by George Washington to the sultan. The museum includes extensive collections of maps, paintings and ancient doors. From there, the Allied Forces prepared for some of the 1942 landings in North Africa. (8 Rue d'Amerique; 0539 93 53 17; open 10 a.m. to 1 p.m. and 3 p.m. to 5 p.m. Monday to Thursday and 10 a.m. to noon and 3 p.m. to 5 p.m. Friday, closed Saturday and Sunday)

Caves of Hercules: Legend states the mythical figure Hercules rested at the Caves of Hercules, nine miles west of Tangier, before his 12 labors that granted his immortality. The cave also bears a resemblance to the continent of Africa. It takes about 15 minutes by taxi to get to the caves, though most cruise lines include this attraction in their shore excursion programs. If you go on your own, you will find several tour guides waiting near the caves. Nearby is a sandy beach (Plage Achkar), where you can sunbathe, swim or enjoy a picnic.