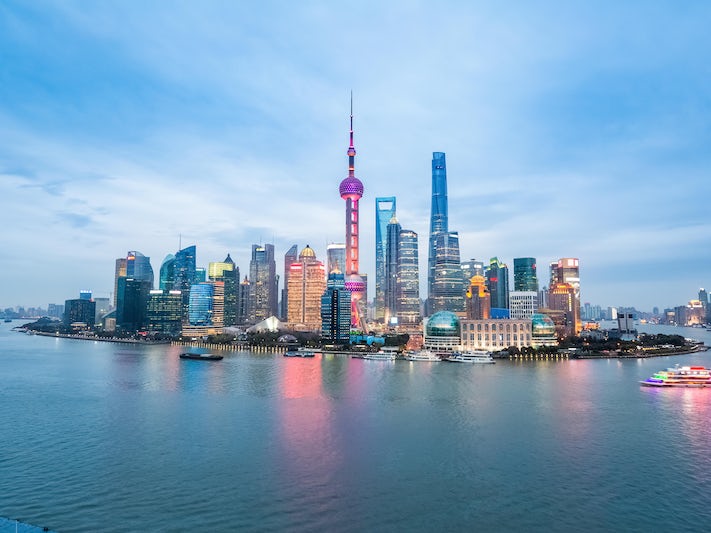 Find Things to Do in Shanghai on Viator

Popular Things to Do in Shanghai

Food and Drink in Shanghai

Shanghai cuisine reflects the cooking styles of the surrounding provinces of Jiangsu, Anhui, Zhejiang, Fujian and Jiangxi, which are characterized by a greater use of soy sauce, sugar, rice wine and rice vinegar than other regional cuisines. That said, Shanghai's 1,000-plus restaurants also serve every other style of Chinese food, such as spicy Sichuan, Cantonese dim sum and Peking, which are more familiar to Western palates. Add the food of virtually every other country you can imagine, and it all adds up to Shanghai being a truly international dining destination.

That being said, one of our favorite local treats is soup dumplings (xiao long bao). These steamed dumplings are filled with a rich broth and ground meat, fish or vegetables. Use chopsticks to gently place a dumpling in your spoon, add a little vinegar and a thread of ginger, then bite a tiny hole in the delicate dumpling skin and suck out the soup (after letting some steam escape). After that, pop the rest of the meaty dumpling into your mouth.

"Food streets," such as Huanghe Road and Wujiang Road near People's Square, serve everything from cheap local eats to Western-style meals. Just wander around to see what takes your fancy.

Jia Jia Tang Bao: If you're the adventurous sort, head to one of these very local outlets for soup dumplings, which are contenders for the best in Shanghai. Little English is spoken, so you may end up ordering by pointing to what others or eating -- or just graze your way through the entire short menu, since prices are reasonable. Order your dumplings at the cash register, grab a table and pick up your steamed-to-order baskets of dumplings at the window when ready. Pork dumplings are the classic choice, but pork with mushroom are also delicious, and a (more pricy) specialty is dumplings with hairy crab. Go early in the day for the best selection; they close when they run out of dumplings. To avoid the People's Square location's mobs, head to the second location listed here. (90 Huanghe Road, near Fengyang Road, Huangpu District; +86 21 6327 6878; 6.30 a.m. to late afternoon/early evening; and 62 Liyuan Road; +86 21 6308 7139; 6.30 a.m. to late afternoon/early evening)

Songyuelou: Vegetarians can enjoy a tasty deal at this Old City restaurant. Popular with locals and visitors alike, it dates to 1910 and is Shanghai's oldest veggie restaurant. English menus can be found upstairs, and the vegetable-stuffed buns fill a lunchtime hole between sightseeing tours of the nearby City God Temple and Yuyuan Garden. (99 Jiu Jiaochang Road; open daily from 11 a.m. to 8 p.m.)

Old Jesse: Beloved by locals, this French Concession restaurant serves up Shanghainese cuisine, including a spectacular codfish head (not as creepy as it sounds, and very meaty; order in advance), braised pork belly and intriguing side-dishes, like red dates stuffed with sticky rice. Surroundings are basic; there are a few tables on the ground floor and a larger dining room on the second floor. (41 Tianping Rd, Xuhui Qu ; +86 21 6282 9260; open daily, 11:30 a.m. to 2:30 p.m. and 5 p.m. to 10:30 p.m.; reservations srongly recommended)

SML Center Food Court: Go down to level B2 of this shopping complex for a wonderland of different foods -- from Western burgers to regional specialties. Keep an eye out for the extra-large, extra-delicious pan-fried dumplings at Yang's, and the choose-your-own-ingredients Mala Xiang Guo stir-fry spots -- just look for the places with a huge array of ingredients on display, but beware, the sauce is a bit spicy. (618 Xujiahui Road, near Tianzifang; mall open daily, 10 a.m. to 10 p.m.; restaurant hours may vary)

Cuivre: Situated in the heart of the French Concession foodie district, Cuivre serves up a taste of southern France under the direction of Michael Wendling, who worked in Michelin-starred kitchens before going it alone. The decor is fun and quirky, with dissected bicycles acting as bar stools. Signature dishes include black pig (slow-cooked pork flavored with thyme), steak tartare, duck confit and tarte tatin for dessert. (1502 Huaihai Zhong Road; +86 21 6437 4219; open daily, 6 p.m. to 10:30 p.m., and also Saturday and Sunday, noon to 2 p.m.)

Waldorf Astoria Shanghai on The Bund: When it comes to drinks, pick your own poison (we suggest choosing from an extensive selection of Scotch) at the stylish and historic Long Bar in the Waldorf Astoria Shanghai on The Bund. Originally the site of the Shanghai Club, a gentleman's club and watering hole for British nationals, the bar opened in 1911. (At the time, the 111-foot-long bar was reputed to be the longest in the world.) It has since been restored to its former glory, with cushy leather chairs, marble columns, stained glass and archive photos that show what it was like in its heyday. (2 Zhongshan East 1st Rd, WaiTan; +86 21 6322 9988.)

The Bund: Shanghai's most memorable mile is the place to see and be seen for visitors and locals alike. Walk along Zhongshan East 1st Road for close-up views of buildings that include the Art Deco Peace Hotel, towering Bank of China and the Customs House, topped by a clock face and bell modeled after London's Big Ben. Or check out the elevated waterside promenade (reached via underground tunnel) for the best views of the rocket-shaped Oriental Pearl and Jin Mao towers, the Shanghai World Financial Center and the Shanghai Tower, currently China's tallest building. Although it's a magnet any time of day, the best time to go is at night when the Pudong skyline is a light spectacle.

Shanghai Museum (Shanghai Bowuguan): Designed in the shape of a ding, an ancient circular Chinese caldron, and located near People's Square, this museum displays a dazzling collection of bronze, sculptures, calligraphy, jade, coins and ceramics. It also has a colorful exhibition of clothing, arts and crafts from China's minority ethnic groups. Museum admission is free, but the daily number of tickets is limited. It's worth renting a handheld audio guide that covers the highlights. (201 Ren Min Da Dao; +86 21 6372 3500; open daily, 9 a.m. to 5 p.m.)

People's Square (Renmin Guang Chang): Adjoining the Shanghai Museum and surrounded by other lavish public buildings and shopping malls, this area includes vast sections of green space, as well as several plazas and a fountain. It's considered to be the center of Shanghai, and is a major subway hub. You'd never know it had a former life as a horse-racing track! (Renmin Avenue dissects the complex.)

Old City (Nanshi): This enclave, located in the southeastern part of the city, provides a tantalizing glimpse of 16th-century Shanghai. Behind the inevitable souvenir stands sit beautiful old buildings, temples and pagodas. The bustling bazaar is a fun place to watch locals queue up for dim sum or to wander through the narrow side streets. The area is bordered by the Renmin and Zhonghua roads that follow the line of the original walls built to keep Japanese pirates at bay.

Yu Garden (Yuyuan): No visit to the Old Town would be complete without taking in this garden, just off the central square of the bazaar. Created in 1559 during the Ming Dynasty, it's split into six areas divided by dramatic dragon walls. Shady paths lead past pools filled with bright orange carp, serene pavilions, rockeries and a covered walkway originally designed for women to walk on one side and men on the other. (218 Anren Jie, +86 21 6326 0830; open daily, 8:30 a.m. to 5:15p.m.)

Jade Buddha Temple (Yufo Si): Two priceless white jade Buddhas were transported from Myanmar (Burma) to China in 1881 by a monk named Huigeng. Although the original temple built a year later no longer exists, the replacement, constructed in 1928, in western Shanghai, provides a beautiful backdrop for the pair of seated and reclining Buddhas. (170 Anyuan Road; +86 21 6266 3668; open daily from 8:30 a.m., closing hours vary and can be as early as 3:30 p.m.)

The French Concession: This area given over to the French community in the mid-1800s is home to tree-lined streets and lavish mansions, many of which have been converted into hotels and restaurants. (Interesting areas to explore include around Huaihai Road between Changshu Road subway stop and French-designed Fuxing Park, and around the Hengshan Road subway stop.)

The Propaganda Poster Art Center: This quirky private museum provides a thought-provoking and powerful insight into China's social history through thousands of idealized posters dating from 1910 to 1990; some posters are also for sale. (In the French Concession area, 868 Huashan Road; open daily from 10 a.m. to 5 p.m.)

Xintiandi: The site of the First National Congress of the Communist Party of China in 1921, this area has reinvented itself as a trendy district famous for its renovated shikumen (1920s-era houses with stone-framed doors), relaxed cafe society and individual shops and galleries. (South of Taicang Road, between Madang Road and Huangpi Nan Road)

Shanghai Tower: This 2,073-foot building with a slight spiral shape is China's tallest -- for now. The observatory takes you up to 1,841 feet, the 118th floor. Your ticket includes a ride on the world's fastest elevator and a visit to an interactive gallery with exhibits about the skyscraper and its construction (501 Yincheng Road M. at Huayuan Shiqiao Road, Pudong; +86 21 2065 6999; open daily, 9 a.m. to 9 p.m.; however the observation deck was recently opened as of this writing and hours may change)

Shanghai Ocean Aquarium: This modern complex next to the Oriental Pearl Tower displays a collection of endangered aquatic species from China, as well as more than 450 species of aquatic animals from other parts of the world -- more than 10,000 creatures in all. (1388 Lujiazui Ring Road; +86 21 5877 9988; open daily from 9 a.m. to 6 p.m.)

Wan Shang Flower and Bird Market: While you will find birds and flowers for sale here, the draw is crickets. Fighting crickets, to be exact. They're big business for breeders and bettors. You'll see cage after tiny cage of them, singing away. You'll also find lots of cricket paraphernalia, including little nets, cages and "ticklers" to get the critters riled up for a fight. There are stalls selling a few other types of pets, too, including chinchillas and creepy dyed frogs, as well as several hawking non-pet items. (417 Xizang Nan Road, near Dongtai Road; +86 21 6336 3530, 8 a.m. to 5 p.m.)