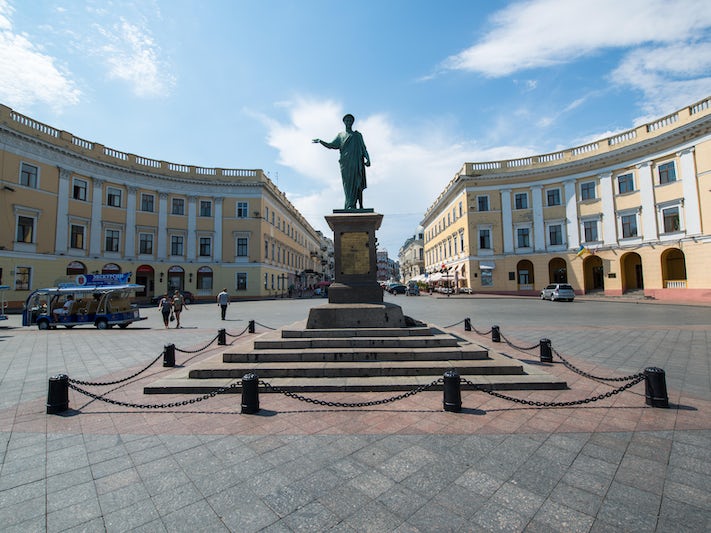 Find Things to Do in Odessa on Viator

Popular Things to Do in Odessa

Food and Drink in Odessa

Ukrainian cuisine is hearty and filling. Typical dishes include borscht, a jewel-colored beetroot soup, which can be served hot or cold and becomes a meal itself when combined with chunks of beef. Chicken Kiev is also an omnipresent dish on restaurant menus. Being a major sea port, Odessa has always had a melting pot of cultures, reflected in the diversity of the city's restaurants, which include European, American, Mediterranean, Jewish, Mexican, Middle Eastern and Asian fare. Even in the main tourist areas, where there are plenty of restaurants to choose from, prices are reasonable.

If you can't make up your mind what type of food to go for, Buffalo 99, just across the street from the Odessa Opera and Ballet House, caters to every taste, from the all-American breakfast or Russian curd fritters served at the start of the day to burgers, pasta and regional dishes from lunchtime onward. (Rishelievskaya 7; open 9 a.m. Friday to Sunday and 11 a.m. Monday to Thursday; stays open through the evening)

For an authentic taste of Odessa's Jewish heritage, the cafe-style Rozmarin in the Jewish quarter is a kosher meat restaurant popular with locals and visitors. (Malaya Arnautskaya 46a; open from 10 a.m. to 11 p.m. Sunday to Thursday and 10 a.m. to 3 p.m. Friday)

A more pricey option that will appeal to wine-lovers is Bernardazzi, which is located in the landmark New Stock Exchange building, another central location on the corner of Pushkin and Rosa Luxemberg streets. The building was designed by Russian architect Alexander Bernardazzi and built in the 1890's. Recipient of the Wine Spectator Award of Excellence, the restaurant's cellar is home to about 5,000 bottles, and the menu includes recommended wine pairings in different price brackets. (Bunina Street 15; lunch served from 11 a.m. daily)

For diners who want to read more than a menu, there is plenty of material at Pobeda on Grecheskaya Square, the city's largest and most central square. Divided into different rooms, the cafe offers a library that contains 2,000 books to browse through. You can take one to look at while enjoying a sandwich or typical Russian dish, such as a bowl of borscht soup, and if you find a book you just can't put down, you can buy it and take it back to the ship. It's also worth noting that drink prices are cheaper if you sit at the bar instead of a table. (Grecheskaya 25; open from 11 a.m. daily)

St. Catherine's Square, the starting point for the majority of guided walks offered as cruise-ship shore excursions, is in the heart of Odessa's historic center. It's dominated by a restored statue of Catherine the Great and surrounded by pretty pink and pastel-colored buildings, many opening to flower-filled courtyards.

Odessa's most famous sight, variously known as the Primorsky Stairs and Richelieu Steps, is now generally known as the Potemkin Steps after being immortalized in the acclaimed 1925 silent film Battleship Potemkin. The stairs, which are wider at the base than the top, create an optical illusion -- from the bottom, it's impossible to see the landings, so it looks like a continuous flight of steps.

Next to the Potemkin Steps is Primorsky Boulevard, an elegant, elevated pedestrian boulevard with views over the port and sea. In the 19th century, the fashionable ladies of the city walked up and down to show off their latest Parisian clothes, and the ornate Londonskaya Hotel, or London Hotel as it is commonly known, attracted literary greats. Today, the elegant thoroughfare, with a glass showcase featuring artifacts from an ancient Greek settlement, remains the place to see and be seen.

The beautiful Odessa Opera and Ballet House is an architectural marvel. After the first building burned down, a replacement was constructed from local limestone in 1887. A major restoration spanning 10 years began in 1996 when the foundation was strengthened with 1,800 piles driven into solid underlying rock. Some cruise lines offer daytime theater tours so visitors can see the opulent auditorium with its red velvet seats, chandeliers, richly gilded decor, and curtain encrusted with gold and silver threads and semi-precious stones. For passengers staying in Odessa over night, tickets to opera and ballet productions can be bought from the ticket office up to 7 p.m. on the day of the performance, and the best seats in the house are only about $20. (Tchaikovsky Avenue 1)

City Garden, Odessa's first park, is located halfway up Deribasovskaya Street, one of the city's main shopping streets. Popular with tourists and locals alike, the park was created by wealthy brothers Joseph and Felix de Ribas in 1803 and donated to the city. Surrounded by restaurants, it has a bandstand, water features and a sculpture of a chair commemorating the satirical book "The Twelve Chairs," written by Odessa-born authors Ilya Ilf and Evgeny Petrov. It's an irresistible stop for a photo opportunity.

Even if you don't buy anything, it's well worth taking a look at the Passage, one of several glass-roofed galleries built at the end of the 19th century. Statues line the decorative interior of the small ground-floor shopping arcade. (At the junction of Deribasovskaya and Preobrazhenskaya Streets)

Russian poet Alexander Pushkin lived in Odessa for one year between 1823 and 1824, and the city inspired works like "Eugene Onegin," "The Gypsies" and "The Fountain of Bakhchisarai." The Pushkin Museum is located inside the house where the poet lived and includes original manuscripts and mementos. (Pushkinskaya 13; open 10:30 a.m. to 5 p.m. Tuesday to Sunday)

The 225-acre Shevchenko Park was founded in 1840 by Emperor Alexander II. A wide avenue leads down to a World War II memorial, the Monument of the Unknown Sailor, overlooking the sea. The park is a 15-minute walk or short taxi ride from Deribasovskaya Street; you can also take the number 3 trolley bus or 28 tram. (Marazliyevskaya Street 1)

Odessa contains the longest network of catacombs in Europe, stretching an incredible 1,553 miles beneath the city. Created during the mining of sandstone to build the city more than 200 years ago, the tunnels were used during World War II to hide Jews and partisans. A small section of the catacombs can be explored during guided tours bookable through local organizations, including Odessa Walks and Tours By Locals.

For a real taste of Odessa, visit the Privoz food market, one block west of the train station and about a 20-minute walk from Deribasovskaya Street. The largest food market in Ukraine and the oldest in Odessa, it was built in 1827 and gets its name from the Russian word for import, relating to the time when mainly imported goods were sold from the back of carts. Today, some 6,000 traders sell a huge variety of Ukrainian products that include cooked meats, pastries, cakes, cheese and pickles. (Privoznaya Street 14; open 8 a.m. to 5 p.m. Tuesday to Sunday)