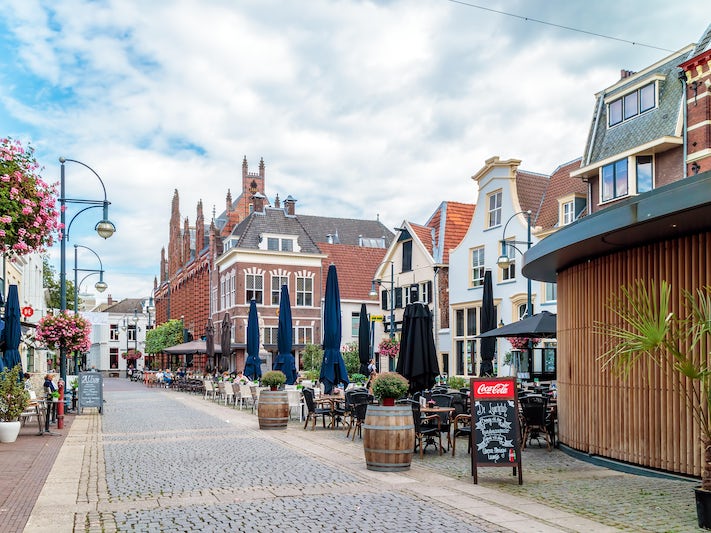 Find Things to Do in Arnhem on Viator

Popular Things to Do in Arnhem

Food and Drink in Arnhem

Admittedly, when compared to Amsterdam, the smaller city of Arnhem comes up lacking in terms of restaurant variety, but there are still more than enough choices for most visitors to find somewhere they'd like to eat. Most eateries, open during lunchtime hours, are fairly casual with a selection of soups, salads and sandwiches. And of course, it's not a Dutch lunch without pancakes on the menu.

Quick and Easy: In the city's small fashion district (Modekwartier Arnhem) you'll find Caspar, a casual bar and cafe perfect for a quick lunch stop and a pint of Dutch beer. Freshly made soups, salads and sandwiches are on the menu. (Elly Lamakerplantsoen 2; daily from 9:30 a.m.)

Centrally Located: Next door to St. Eusebius Church in a converted bank is Dudok, a cafe and brasserie, which in summertime spills onto a large terrace. Stop by for lunch or afternoon tea and choose from a menu of soups, salads, sandwiches, focaccia and fresh pastries baked in the onsite bakery. An English language menu is available. (Koningstraat 40; Monday - Saturday: 8 a.m. - 1 p.m., Sunday: from 10 a.m.)

For Pancakes: For Arnhem's largest selection of pancakes you'll have to go to Lizzy's Pannenkoekenhuis. This kid-friendly restaurant serves up traditional Dutch pancakes, as well as more modern variations like gyro or lasagna pancakes. Diners requiring gluten-free, lactose-free or egg-free variations can be accommodated. (Rijnstraat 79b; Monday - Friday: from 2 p.m., Saturday and Sunday: from noon.

Where the Locals Are: Located near Arnhem's theater district, Grand Cafe Metropole is the place for artists, actors and theatergoers to congregate. During the day you might not see as many artistes gathered for conversation, but you will find a nice selection of soups, salads and sandwiches, reasonably priced. On a sunny day, choose a sidewalk table for some great people-watching. (Steenstraat 68; Monday - Friday: 10 a.m. - 3 p.m., Saturday: 10 a.m. - 4 p.m., and Sunday: noon- 4 p.m.)

As Arnhem is most well-known for the World War II battle that took place nearby, most of the city's main sightseeing attractions are military in nature.

There are numerous Battle of Arnhem-related sites to see in and around Arnhem including the John Frost Bridge, previously known as the Bridge of Arnhem and memorialized in the 1977 movie "A Bridge Too Far." At the foot of the bridge is the Battle of Arnhem Information Centre where you'll find images and audio fragments of witnesses to the battle.

For a more in-depth dive into the famous battle visit the Airborne Museum. Housed in what was once the headquarters of the British forces fighting in the area, the museum features an extensive collection of original weapons, uniforms and equipment. But most compelling are the pictures, audio interviews and videos about the battle. (November - March: Monday through Saturday: 11 a.m. - 5 p.m. and Sundays:noon - 5 p.m. / April - October: Monday through Saturday: 10 a.m. - 5 p.m. and Sundays: noon - 5 p.m.)

A short walk away is the Airborne Cemetery, where an estimated 1,700 World War II soldiers are buried from countries as diverse as England, Poland, Canada, Australia and the Netherlands.

Perhaps one of Arnhem's most popular tourist attractions, the Open Air Museum has absolutely nothing to do with World War II. Instead, the outdoor museum displays a range of traditional Dutch home styles, including cottages and farms from all parts of the Netherlands. Related structures like schools and factories have been relocated here as well. Employees in costume dress complete the experience. Hours vary by season.

In Arnhem's town center about 36 centuries-old cellars have been restored and interconnected to create the Historische Kelders, or Historic Cellars. Displays trace the history of Arnhem from its earliest days to today. Guided tours are offered on Wednesdays, Fridays and Saturday afternoons; afternoon self-guided tours are available Tuesday to Saturday and the first Sunday of each month.

Not far outside of Arnhem is the Da Hoge Veluwe National Park, with its three museums and numerous foot paths and bike trails. If you're an art lover, you won't want to miss the Kroller-Muller Museum with its impressive collection of 19th- and 20th-century art, including a large collection of Van Goghs. A lovely sculpture garden is also there. (Tuesday - Sunday: 10 a.m. - 5 p.m.) If you have a little extra time on your hands, take to one of the 1,700 "white bicycles" provided free of charge, and pedal your way around the park.

Burgers' Zoo, which celebrated its 100th anniversary in 2013, is the largest and most visited zoo in the Netherlands. It features an indoor tropical rainforest, an East African savannah complete with zebras, antelopes and lions, a rock desert habitat for desert animals and a walk-through aquarium. Other areas showcase a chimpanzee colony, gorillas, panthers, elephants, tigers, bears and more. (summer: 9 a.m. - 7 p.m., winter: 9 a.m. - 5 p.m.)

The small Dutch Wine Museum is housed in an old wine cellar and showcases a variety of winemaking-related artifacts. (Saturdays: 10 a.m. - 5 p.m.)

With much of Arnhem destroyed during World War II, the only prominent relic of older days is the gothic-style St. Eusebius Church. Originally built between 1452 and 1560, much of what you see today was rebuilt after the war. Work is often being done on some part of the church or other and it is often encased in scaffolding. A panoramic glass elevator takes visitors to the top of the church tower for a stunning view of the city. Admission to the church is free, though a ride in the elevator will set you back a few euros.

Head a little further afield along the Waal River and you'll find the medieval Doorwerth Castle. First built in the 13th century but expanded several times over the years, the castle as it stands today dates back to 1637, though it, too, was damaged during the war. (Tuesday to Sunday: 11 a.m. - 5 p.m.)