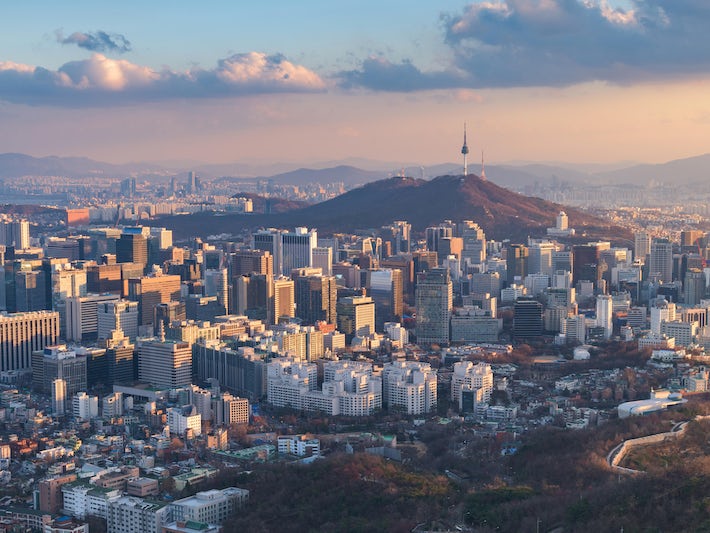 Find Things to Do in Seoul (Incheon) on Viator

Popular Things to Do in Seoul (Incheon)

Food and Drink in Seoul (Incheon)

Popular meals include:
Bibimbap: a large bowl of rice, vegetables and sometimes minced beef, into which you stir an egg and chili paste using your chopsticks.

Tabletop barbecues (bulgogi): a not-to be missed experience. This generally includes beef or pork, grilled before you with an extractor fan pulled low to suck up the smoke. The meat is traditionally cut into small pieces and eaten wrapped in lettuce leaves with roasted garlic and chili paste.

Royal Cuisine: a fancy feast of small, delicate taste sensations that arrive like a Mediterranean meze, in small dishes spread across your table.

Incheon has a small Chinatown, which makes a good spot for lunch. There are also fish restaurants and snack stalls around Wolmido Island. Lunch spots in Seoul are plentiful, particularly around Itaewon, Meongdon and Jongno districts.

Eat Like a Local: The Sun on Dongchun Dong road in Yeonsu-Gu district, Incheon is a great restaurant to try royal cuisine. The staff may not be fluent in English, but they're happy to help tourists choose dishes like abalone sushi, eel in raspberry sauce, marinated beef and chicken soup.

Eat Like a Tourist: Seoul's royal cuisine restaurants include tourist-orientated Korea House cultural center, where you can also learn about tea ceremonies, dress up in the national costume and even see a mock wedding. (80-2, Pil-dong 2 (i)-ga Jung-gu)

Many of the large malls will include a food court with a good choice of Western and Asian food.

Vegetarian: Eat "temple" food created by a female monk, and learn something about Buddhist etiquette as you sit cross-legged at Balwoo Gongyang restaurant above the Templestay information center, opposite Jogyesa temple. (71 Gyeongjidong Jongnogu)

Cheap Eats Near Main Attractions: Insa-Dong and Jongno district have snack stalls, where you can join locals waiting in line for particular specialties like egg rolls, pancakes and fish skewers.

Bokbunjaju, a raspberry flavored wine-like liqueur, is very palatable. Soju is Korean vodka. For more international tastes, there are 40 varieties of vodka and 200 wines on offer at the Woo Bar at the trendy W Seoul Walkerhill hotel.

Seoul has several ancient palaces. Gyeongbokgung, the oldest and grandest, was once the center of the important Joseon Dynasty and incorporates old Chinese and royal court architecture. First established in 1394, the present building was constructed in the 1860's, the original having being destroyed during Japanese occupation. (Jongno-gu Sejong-ro 1, closed Tuesdays) Nearby is UNESCO-listed Changdeokgung, which dates back to 1405 and once housed the royal family. It's built on Confucian principles and features a pretty "secret" garden designed for scholarly reflection. (110-360 Yulgok-ro 99 Jongro-gu, closed Mondays)

A favorite hangout with locals and visitors alike, Insa-Dong (or Insadong) street (nearest subway stop Anguk, line 3) and its surrounds are known for antique and ceramics shops, art galleries, traditional tea shops and street stalls where sweet sellers and the like ply their trade, some dressed in national costume.

Full- and half-day tours to the Demilitarized Zone or DMZ outside Seoul are popular. This is the weapon-free no-mans-land that has separated North and South Korea since the Korean War ended in 1953. You can descend into the "Third Tunnel," which North Korea is believed to have dug in an attempt to breach the border and peer across to the neighbors through telescopes. Some full-day tours will also take in Panmunjom, the site of the armistice signing, where, under the gaze of soldiers, you can walk around a conference table into North Korean territory. You will need an advance booking and a passport with you.

If you're sticking to Incheon, head for the seaside atmosphere of Wolmido Island, which has a fun fair and stalls selling seafood, including dried octopus tentacles. Yeonan Pier has a fish market with more than 50 stalls. The area is also known for its saltwater baths, found on Seawater Bath Street.

If you are interested in the Korean War, take a stroll in Jayu (Freedom) Park in Incheon, which features a monument to General MacArthur, who organized the pivotal U.N.-led Incheon landings. There's more information in the Incheon Landing Operation Memorial Hall (Yeonsu-gu Ongnyeon-dong 525, closed Mondays). In Seoul, you can visit the War Memorial of Korea (Yongsan-gu Yongsandong 1-ga 8, closed Mondays), which includes a Korean War exhibition. Admission to both is free.

N Seoul tower is a landmark on a forested hill with fine views over Seoul. At the top is a restaurant and an observation deck decorated with thousands of padlocks left by lovers, inscribed with their initials.

Experience one of Seoul's traditional bathhouses, where you can alternate between hot and cold water and steam, relax or get a massage. Those called Jjimjilbangs offer more comfortable facilities -- even places to lounge watching TV in your pajamas. Among the most famous is Dragon Hill Spa in Yongsan, which includes a rooftop cinema, computer rooms and an indoor golf range.

Once covered by a highway, Seoul's Cheonggyechon Stream is now an urban park lined with walkways and crossed by 22 bridges. At night, waterfalls and fountains are illuminated at several points. For a respite from hot weather, join it at Insa-dong, and follow the locals strolling or even paddling.

The Carved tablets at UNESCO-listed Jongmo Shrine are thought to house the spirits of dead kings and queens. Each May, the ghosts are honored with food offerings, mass ritual bowing and dancing. (Seoul-si Jongno-gu Jongno1-ga 155)

Despite being majorly reconstructed in the 1970s, the Suwon Fortress is UNESCO-listed for its faithful recreation from 18th-century records. It is found 48 km south of Seoul and runs for 5.7 km.