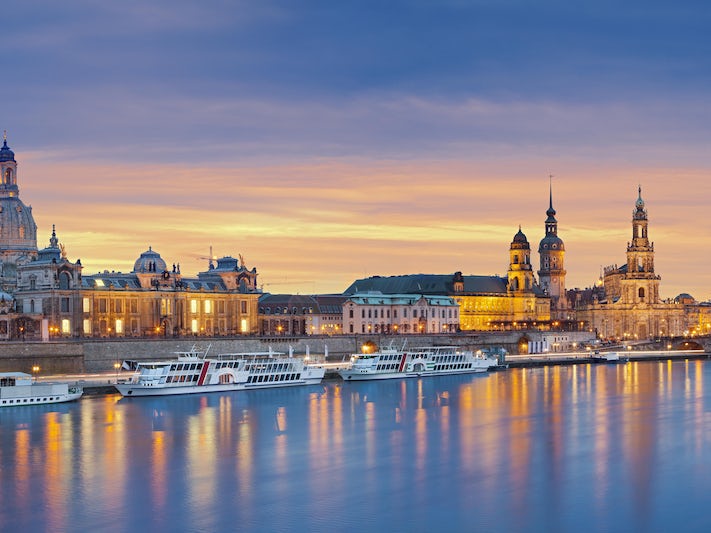 Find Things to Do in Dresden on Viator

Popular Things to Do in Dresden

Food and Drink in Dresden

While Dresden offers foods from many nationalities, its traditional German menus will most interest visitors. Try hearty dishes like bratwurst, schnitzel (cutlets) and sauerbraten (pot roast), best enjoyed with good German beer. Radeberger is the most popular local brew, with Freiberger a close second.

Local Eats Dresden 1900 is filled with tram memorabilia, including an actual 1903 tram. Along with German dishes, the restaurant offers 80 kinds of pasta. It is quite popular, so a reservation is recommended. When the weather cooperates, an outdoor terrace provides views of the church. (an der Frauenkirche 20; 0351 48 20 58 58; 8 a.m. to 2 a.m., Monday to Saturday)

Old world decor and a location on the lovely Theaterplatz, next to the Semper Opera, make Cafe Schinkelwache an excellent choice for salads, crepes or heartier dishes like stuffed cabbage or beef roulade with red cabbage and dumplings. The terrace is a perfect spot on a sunny day. (Theaterplatz 2; 49 (0) 351 4 90 39 09; 10 a.m. to midnight daily)

For a splurge, consider the Alte Meister cafe & restaurant, occupying the premises of the lofty, barrel-ceilinged studio of Albert Braun, who directed the artistic renovation of the Zwinger. For lunch, the café menu offers inexpensive sandwiches but also main dishes such as filet of pork, venison stew or a spicy fish curry. Dinners are more formal, with appetizers such as marinated salmon or veal carpaccio and main courses including filet of tiger catfish or rack of lamb. (Enter at Theaterplatz 1a. Tel: 03 51 / 481 04 26. Open daily 10 a.m. until 1 a.m.)

The food and setting are exceptional at Restaurant und Bar Lesage, run by the posh Kempinski Hotel and located in the "transparent factory," a stunning ultra-modern glass building where Volkswagen makes its luxury Phaeton cars. You can tour the factory, as well. Choices on the contemporary menu might include anglerfish in a saffron sauce, guinea fowl with a parsnip puree or beef tenderloin in a red wine shallot crust. (Lennestrasse 1, 15 minutes from the town center via trams 1, 2 or 4, Strassburger Platz stop; noon to 3 p.m. and 6 p.m. to 10 p.m., Tuesday to Saturday; 11 a.m. to 3 p.m. Sunday (brunch); noon to 3 p.m. Monday (lunch only); guided factory tours noon to 3 p.m., Monday to Friday and 3 p.m. Saturday and Sunday)

The most moving symbol of the rebirth of Dresden, the Frauenkirche (Church of Our Lady) was built between 1726 and 1743 and was famed throughout Europe for its massive 314-foot-high dome, a 12,000-ton marvel with no internal supports. After the 1945 bombings, the charred ruins remained gloomily in place for years under Russian occupation. Rebuilding was done using the original blueprints for the grand baroque architecture. Fragments of the shattered stone were sold to help raise money. The enormous task was completed just in time for the 800th anniversary of the founding of Dresden in 2005. Some 3,800 original stones were used in the rebuilding process. The squares around the church have come to life, as well, filled with shops and cafes. The church is open to visitors free to admire the pulpit, baptismal font, elaborate altar and organ. The visitor center nearby offers a worthwhile 25-minute film on the reconstruction for a small fee, shown 15 minutes before every hour from 9:45 a.m. until 4:45 p.m. (10 a.m. to noon and 1 p.m. to 6 p.m., Monday to Saturday)

Inspired by Versailles, Saxon ruler August the Strong built another baroque masterpiece, The Zwinger, between 1710 and 1732. He used the promenades, galleries and pavilions filled with fountains and statuary for court festivities and tournaments and, some say, to house his dozens of concubines. The galleries today hold notable museums. The most famous is the opulent Old Masters Picture Gallery, which attracts 500,000 art-lovers every year to admire masterpieces such as Raphael's "Sistine Madonna" and Correggio's "Holy Night," as well as works by Botticelli, Titian, Tintoretto, and Dutch and Flemish masters like Rubens, van Dyck, Rembrandt and Vermeer. The Porcelain Collection in another wing is one of the largest of its kind in the world. Other museums include an armory; a zoology museum devoted to animal life; and a salon of mathematics and physics holding scientific and technical instruments, clocks, globes and maps. (10 a.m. to 6 p.m., Tuesday to Sunday)

The enormous former Dresden Royal Palace (Residenzschloss) was constructed in the 12th century as a fortress and expanded over the centuries into a magnificent residence for the region's Saxon rulers. The main attraction is the Green Vaults (Grunes Gewolbe), a dazzling collection of some 1,000 treasures of ivory, amber, jewelry, gold and silver. "The Court of Delhi on the Birthday of Grand Mogul," a not-to-be-missed baroque masterpiece of the goldsmith's art, boasts 132 figures and thousands of precious gems including nearly 5,000 diamonds, 160 rubies and 164 emeralds. Timed admission tickets are sold to the vaults. The Hausmannsturm (Hausmann Tower) in the palace offers a great view over Dresden's historic center. (10 a.m. to 6 p.m. daily, except Tuesdays)

Along the north wall of the Stallhof, the stall courtyard of the Royal Palace complex is the "Procession of Princes" (Der Furstenzug), said to be the world's largest tile mural. The 335-foot panorama was created as a fresco in 1589 to honor the House of Wettin, Saxony's ruling family. The faded work eventually was reproduced in tiles, a three-year project from 1904 to 1907. More than 24,000 Meissen tiles were used to represent 35 margraves, princes and kings in a horseback procession, followed by 59 scientists, artisans, craftsmen and farmers of the time. The work survived the city's World War II bombing surprisingly well; only about 200 tiles had to be repaired.

One of the most beautiful opera houses in the world, the Semper Opera House (Semperoper) is well worth a guided tour if schedules don't allow for a performance. Reconstruction has restored its Italian High Renaissance splendor with multistory columned arcades, sculptures, paintings and an opulent auditorium noted for its chandeliers and lavish curtain. The opera is named for Gottfried Semper, the architect who was responsible for the original building constructed between 1838 and 1841, as well as for the Zwinger's Old Master Gallery. Opera performances often sell out, so advance online purchase is recommended. Buying tour tickets in advance also will save standing in line. Tour times are posted on the Web site and outside the opera house. (Theaterplatz 2; guided English tours usually at 3 p.m.)

For shopping in the old city, the Newmarkt Square around the Frauenkirche offers the best local souvenirs, and the underground QF passage, one flight down in the square, is a glass-roofed passage with a melange of upscale shops and cafes. Dresden's modern shopping area starts at the main train station and runs the length of Prager Strasse to Wilsdruffer Strasse. The city's largest department store, Karstadt, is on Prager along with shops with familiar names like Esprit and Timberland. The city also has two shopping malls: Centrum-Galerie and the Altmarkt Galerie, each with more than 120 shops and restaurants.

Admirers of fine architecture should take a walk across the Augustus Bridge or take a tram to the skylit, multitiered Neustadt Market Hall and its many shops. The market has been restored to its early 1900's charm, with wrought iron railings and iron staircases and lamps. The arts and crafts arcades on the Hauptstrasse (Nos. 9 through 19) also make for great browsing. Walk to the end to Konigstrasse to admire some of Dresden's best-preserved baroque streets, lined with fine buildings and upscale shops and restaurants. Incidentally, the best views of the Dresden skyline are from this side of the river. Take tram lines 4, 8 or 9 from Theaterplatz. If time permits, visit Pfunds Molkerei, said to be the most beautiful dairy shop in the world. Every inch is covered with glorious hand-painted tiles by Villeroy & Boch, encompassing more than 1,668 feet. (Bautzner Strasse 79, tram 11 from Albertplatz (end of Hauptstrasse), Pulsnitzer Strasse stop)

Those lucky enough to visit in December can discover Dresden's Striezelmarkt. It is said to be Germany's oldest Christmas market, dating to 1434, and it is certainly one of the largest and most colorful, boasting nearly 600 vendors in the squares around the Frauenkirche. The name comes from the city's famous stollen fruit cake.

Admirers of modern art will want to visit the restored Albertinum and its New Masters Gallery (Galerie Neue Meister) featuring French and German Impressionists, such as Claude Monet, Edgar Degas and Max Liebermann; galleries devoted to Gerhard Richter; and contemporary work including video installations. The building also holds a notable sculpture collection with work from Rodin to the 21st century. It is located on Bruhl Terrace, part of the city's original ramparts, which is now a landscaped terrace lined with sculptures and fine buildings. The Royal Art Academy is located there, featuring a remarkable glass dome crowned by a gilded statue of Nike, goddess of victory. (10 a.m. to 6 p.m., Tuesday to Sunday)

Fans of trains, planes, ships, cars and bicycles will enjoy Dresden's comprehensive Transport Museum, which traces the history of transportation from the 1870's to the present with hundreds of examples, including more than 100 railway vehicles. The building, the Johanneum, was originally an old stable building dating from the 16th century. (Augustusstrasse 1, Newmarkt Square; 10 a.m. to 6 p.m., Tuesday to Sunday)

Dresden's New Synagogue stands on the site of the destroyed 1840 Semper Synagogue. Rather than replicating the past, it marks a new beginning with a modernistic structure that is a contrast to the adjacent baroque old city. The slightly off-kilter design, a reminder of painful history, was nominated for the European Union Prize for Contemporary Architecture. The interior is equally dramatic, draped by golden chain-mesh curtains. Though far from the pre-war 60,000, the Jewish population today numbers about 700, and the synagogue is active. Guided tours of the building and the Old Jewish Cemetery are available Monday through Thursday through Hatikva, the Education and Meeting Centre for Jewish History and Culture in Saxony. (Pulsnitzer Strasse 10; 0351/ 8020489)

Two other churches might be of interest. The Kreuzkirche (Church of the Holy Cross), the largest in Saxony, was built in late baroque and early classical style between 1764 and 1800. Located on Altmarkt, it is home to the famous Kreuzchor Boys Choir. Concerts are held regularly; check the schedules. The restored baroque-style Katholische Hofkirche (Catholic Court Church) has 38 biblical and historical figures adorning the facade, a handsome stone pulpit and a crypt with the tombs of 49 Saxon rulers. It's on Schlossplatz near the Royal Palace in the Theaterplatz. Both churches usually are open during daylight hours.

For a green respite, head to theGrosser Garten, some 500 acres of parkland about a 15-minute tram ride southeast of the main sights. It includes a botanical garden, zoo and the Summer Palace, a baroque masterpiece completed in 1683, but so far restored only on the outside. Take trams 1 and 2 from Postplatz.