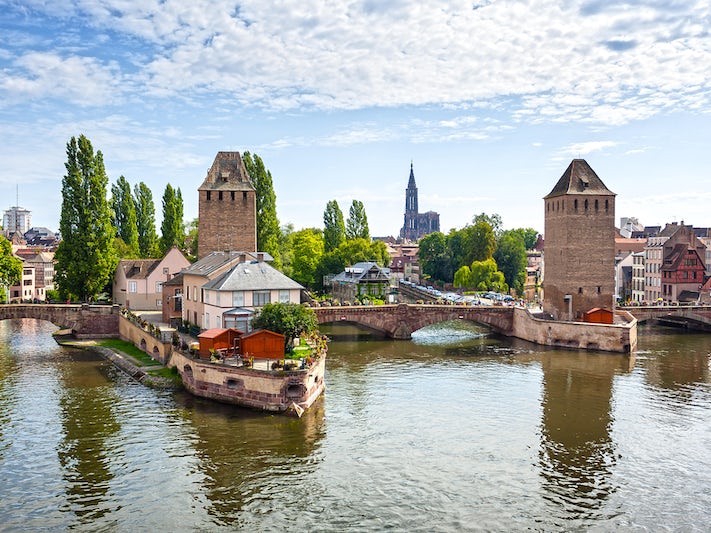 Find Things to Do in Strasbourg on Viator

Popular Things to Do in Strasbourg

Food and Drink in Strasbourg

Strasbourg features plenty of international restaurants and familiar chains. But to get a real flavour of Alsace, head to a "winstub," Strasbourg's small family owned restaurants. Make sure you're hungry because the local cuisine combines the best of France's world famous gastronomy coupled with the robustness of German food. Don't forget the excellent local wine and beer.

Sauerkraut is a specialty. Not simply the "sour cabbage" dish typically associated with the name, this regional version is a carnivorous feast piled high with assorted meats like local sausage, ham hock and pork chops. In fact, many meals feature at least three types of meat, poultry or fish. A culinary institution not to be missed is tarte flambee, the northern French equivalent of pizza. With various cheese, meat and vegetable toppings on a thin dough base, it's an ideal meal for sharing. And try to leave room for kougelhopf, sweet bread pudding laced with raspberry brandy.

Once the city's custom house, the central and cavernous L'Ancienne Douane restaurant along the Ill river is an atmospheric and scenic place to enjoy a meal. Browse through the extensive menu over an aperitif and giant pretzel, and then take your pick from specialities such as sauerkraut, a casserole with three types of meat, ham served with Muenster cheese and savory or sweet tarte flambee. This family-friendly restaurant offers a children's menu. (6 Rue de la Douane; open noon to 2 p.m., dinner from 5 p.m.)

Situated between the cathedral and the river pier, The Pfifferbriader -- known locally as Pfiffes -- is a typical winstub. Spread over two floors and with a terrace with views of the cathedral, the restaurant dishes up filling local food such as sauerkraut with three types of fish; beef with wine sauce and dumplings; and assorted cold meats. (14 Place du Marche aux Cochons de Lai; open daily from noon.)

Diners can take in serene surroundings and sublime food at the Michelin starred restaurant Le Crocodile. The fine-dining experience combines classic and contemporary style with huge paintings adorning the walls and a namesake full-size reptile overlooking the entrance. A full tasting menu will set you back more than 100 euros, but fixed-price lunches are available from around 40 euros. (10 Rue de L'Outre; open from noon.)

French writer Victor Hugo described the Notre Dame Cathedral, the symbol of Strasbourg, as "a prodigy of the gigantic and of the delicate." Towering over the Old Town, it boasts an array of architectural styles as it was built over several centuries. Its standout feature is that it only has one tower. (Money ran out to build the second one.) Inside, there is an amazing astronomical clock. The best time to see it is 12:30 p.m. when all the figures move around, including the 12 apostles filing in front of Christ, a cock crowing and a child, teenager, adult and old man representing the four stages of life passing in front of a representation of death.

La Petite France is the most photographed area of Strasbourg. With half-timbered houses dating from the 16th and 17th centuries, it once served as district of fishermen, millers and tanners. The name might sound idyllic, but it actually comes from the hospital where people suffering from mal Francais, or syphilis, were once treated. The district leads to the distinctive ponts couverts, or covered bridges, that have kept the name even though the roofs disappeared during the 18th century.

River cruises through the historic heart of Strasbourg provide a fascinating glimpse of ancient buildings and the modern European Parliament. In such a multicultural city, it's probably not surprising to find headset tour commentaries available in 12 languages, including the invented world language Esperanto. There are also special commentaries for children. Starting from the pier outside the Palais Rohan, trips run throughout the year at half-hour intervals starting at 9:30 a.m.

The riverside grand Palace Rohan is a paradise for cultural enthusiasts. The Decorative Arts Museum, Fine Arts Museum and Archaeology Museum are located there. (2 Place du Cheteau; all three museums are open from 10 a.m. to 6 p.m., except on Tuesdays.)

Gutenberg Square used to be the center of political and social life in the city and now it's a pleasant place to stop for a coffee and watch the world go by. The most impressive building is the former city hall that dates to 1585. The square takes its name from inventor Johannes Gutenberg, immortalized with a statue, who developed his famous printing press in Strasbourg.

Arguably the most beautiful medieval building in Strasbourg, Maison Kammerzell is next to the tourist office in Place de la Cathedrale. Dating to 1427, the richly carved black timber-framed building belonged to a series of rich merchants over the centuries. The interior is decorated with frescoes by 19th-century Alsatian painter Leo Schnug. It is now a restaurant.

To discover another fascinating side of Strasbourg, visit the old Jewish quarter around Rue des Juifs, one of the city's oldest streets. More than 1,600 years old, it was originally a Roman road. At the end of the street farthest from the cathedral, number 30, between Rue des Pucelles and Rue de la Faisan, was the site of the 12th-century synagogue, the mikvah baths at the corner of Rue des Charpentiers and the cemetery at the Place de la Republique. Two rooms in the Alsatian Museum are also devoted to Jewish history. The museum is open daily from 10 a.m. to 6 p.m. but is closed on Tuesdays.

The exotic Egyptian House is in striking contrast with the rest of the city's architecture. The 1905 facade combines art nouveau with oriental influences and includes a fresco featuring a pharaoh and papyrus. (10 Rue du General Rapp.)

Take a tropical walk in the heart of the city at the Botanical Gardens next to the University Palace. Established in 1884, the gardens at 28 Rue Goethe contain 6,000 plant species, and the highlight is the two-story greenhouse with palms, banana trees and huge ferns. The garden is open daily, and admission is free.

If you fancy visiting the European Parliament, you'll need to plan ahead. Each month, members of parliament gather for four days to vote and debate during a series of meetings called plenary sessions. Guided tours for 20 to 45 people take place during plenary sessions, and requests for visits are subject to availability. Group visits are also hosted at other times but do not include individual visits. Anyone wanting to find out what makes the parliament tick is advised to apply for a place two to three months in advance using the application form on the Web site.

Considered one of the best collections in France, the Zoological Museum features specimens of mammals, birds, fish, reptiles and insects from around the world. The displays are mainly derived from the exhaustive collection of Jean Hermann, a 19th-century French physician and naturalist who was a professor of medicine at Strasbourg University. (29 Boulevard de la Victoire; open daily from 10 a.m. to 6 p.m., closed on Tuesdays.)

The mountain fortress Haut-Koenigsbourg, 34 miles south of Strasbourg, has witnessed eight centuries of colorful and often bloody history. Restored in 1900 by Emperor William II to appear as it was in the 15th century, the imposing castle includes furnished living quarters and grisly collections of medieval weapons. It also offers fantastic views of the Alsace plain, Vosges Mountains, Black Forest and, on clear days, even the Alps. Excursions can be booked in Passau, and they take about four hours.