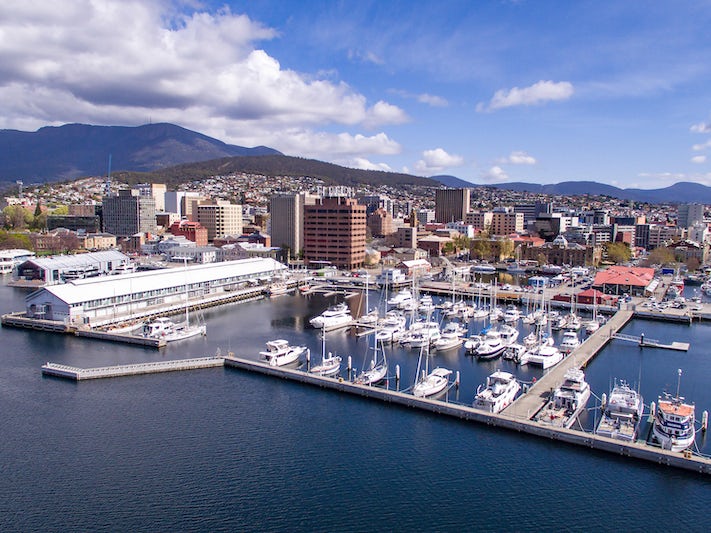 Find Things to Do in Hobart on Viator

Popular Things to Do in Hobart

Food and Drink in Hobart

The waters around Tasmania are rich in seafood, so menu items include oysters, mussels, char-grilled salmon, chilli salt squid, seafood risotto with roasted fennel, fish salads with calamari, smoked salmon and brie, and fresh flathead and trevalla, plus an abundance of lamb dishes and Italian dishes that arrived with the post-World War 2 wave of Italian migrants.

Mures Lower Deck: This family seafood business was originally established by Jill and George Mure in 1973 in Battery Point. The business remains in the family, with two restaurants (open continuously from mid-morning until evening) now in the same building on Victoria Dock. The moderately-priced Lower Deck has the catch of the day displayed in cases at the counter. Order there, and it will be brought to your table when it's ready. Enjoy fresh raw oysters, scallops, prawns, crumbed squid or battered blue-eyed trevalla. Finish off with a large selection of ice creams at a separate counter. (Victoria Dock, 03 6231 2121; open daily from 7 am to 10 pm)

Mures Upper Deck: Head upstairs from the Lower Deck to the more elegant incarnation of Mures, where a polished team of wait staff await along with great views of the harbour. Order Asian-style oysters and Bass Strait Squid pan-fried with chilli, lemon, charred cos lettuce and mustard dressing or line-caught ling with seasoned potato chips. (Victoria Dock; 18 Hunter St; 03 6231 1999; open daily from 7 am to 10 pm).

MACq 01 Hotel: The storied history of the Macquarie Wharf buildings comes to life in MACq 01 Hotel where professional storytellers are on hand to share tales about the Macquarie Wharf building's history. Sit and watch the passing cray boats pull into the marina from your table at The Old Wharf (18 Hunter Street; 03 6210 7600; open Monday to Sunday, 6.30 pm to 9.30 pm), where the menu celebrates the best Tasmanian produce.

Banjo's Bakery Caf?: For simpler fare, try the Cape Grim beef and mushroom pie or chicken, bacon and avo sandwich from Banjo's Bakery Cafe (Salamanca Square; 03 6224 3747; open daily 6 am to 6 pm). Those craving a kick of chilli should head to Mr Good Guy for Asian dishes such as beef cheek rendang with sweet potato. The dining room spills onto one of the city's oldest lanes and is a bright and playful space to perch while your cruise ship is in port. (Ground floor, Ibis Styles Hobart, 173 Macquarie St, open daily, 6.30 am to 9.3 pm.)

Gourmania Food Tours: Want to know all of Hobart's hot spots? The intimate Gourmania Food Tours are led by in-the-know locals and are a great way to discover Hobart's dining scene. Choose from four food tours or, if you have time before or after your cruise, curate your own itinerary. Discover Hobart's best eats on a City Tour where as well as tasting everything from tea to tapas, you learn a little about the city's culinary cred and get the inside stories. (gourmaniafoodtours.com.au; 0466627947)

Moorilla: The Moorilla estate, where the Museum of Old and New Art (MONA) stands is located, about 12 kilometres north of Hobart, occupies a headland peninsula that also includes a microbrewery, a winery and French restaurant The Source (There is also a cafe and attractive grounds dotted with sculptures and commanding view of the Derwent Valley. (The Source, Ether Building, 655 Main Road; 03 6277 9904; open daily for breakfast from 7.30 am to 10 am; lunch from noon to 3 pm.)

Cascade Brewery Co.: Established in 1824, Australia's oldest brewery, is still going strong. Cascade Premium is the best-known label, but the Cascade Brewery Co also produces soft drinks. Tours last two hours, with the machinery working on weekdays but not weekends. From Hobart, you can take Bus 446 from Stop 14 to Stop 18. You can also purchase a City Loop ticket with a tour of Cascade Brewery with The Red Decker Company, which stops at some of the best attractions around Hobart before being bound for the brewery. (140 Cascade Road; open for daily tours, several times a day.)

StelaVino Guided Wine Tours: Interest in Tasmanian wines continues to grow. If you think you know a lot about wine, we challenge you to get onboard StelaVino Guided Wine Tours. Steliano Cusmiani has been working in the wine industry for the past 42 years and what he doesn't know about the industry is not worth knowing. Let Steliano be the designated driver during the tour, which visits five wineries and includes lunch and a glass of wine. Steliano will also steer groups to an award-winning local cheesemaker.

Tasmania Travel & Information Centre: Three blocks from Macquarie Wharf is where you'll find the Tasmania Travel & Information Centre (16-20 Davey Street; 03 6238 4222) where you can pick up a map and plot out points of interest. Get some advice from the experts about the self-guided walking route that includes Franklin Square, Parliament House and Square, St. David's Park, Battery Point historic residential neighbourhood and Kelly's Steps to Salamanca Square.

Maritime Museum of Tasmania: Nautical buffs will be pleased with the Maritime Museum of Tasmania's survey of the city's connection to the sea and outside world through paintings, photographs, maps and ship models of early sailing vessels, steam merchant ships, whalers, naval and fishing vessels. The museum also looks at the history of the local shipbuilding industry. (Corner Davey and Argyle Streets; open daily, 9 am to 5pm).

Battery Point: Walk up the hill from the CBD and you will find yourself contemplating a Tasmanian sea change. Take a peek around the charming and prized residential neighbourhood with its one- and two-story wrought-iron-fronted row houses and near mansions, as well as examples of more traditional Victorian architecture.

Mt. Wellington: The summit of Mt Wellington soars up to 1272 metres and gives an outstanding view of Hobart, its harbour, the Tasman Peninsula and Derwent Valley. It may appear blanketed in clouds from the city, though it is not always possible to tell from down below whether the view is worth the drive up. Even if it looks iffy, there are views at lower levels, plus you pass through attractive leafy neighbourhoods and scenic forests. The Hobart Shuttle Bus Company, the Hobart Shuttle Bus Company Mt. Wellington Express operates a shuttle bus from the information centre in the morning and afternoon, allowing 40 minutes of sightseeing at the highest point in Hobart.

Museum of Old & New Art: MONA is considered by some to be a repository of blasphemous exhibits that are openly anti-religious or explicitly sexual and don't deserve to be classified as art; others think it's a place of most intriguing installations. It's a three-level subterranean setting carved into Triassic sandstone with exhibits that include a waterfall of recently Googled words, window displays to peer into, a poo machine, videos on the ceiling to watch while lying on billowing cushions and even soap sculptures of vaginas. As well as art deemed to be provocative, the museum houses traditional artworks by esteemed Australian artists such as Sidney Nolan, and a small collection of ancient Egyptian statuettes. Onsite parking is extremely limited, so it is advisable to take the Mona Roma Fast Ferry, a 30-minute ride with eight departures a day from the ferry terminal at the Brooke Street Pier in Hobart between 9.30 am and 5. 30 pm. Those with an entourage can also upgrade to the boat's 'posh pit'. (655 Main Road, Berridale; 03 6223 6064; open Wednesday through Monday, 10 am to 5 pm),

Cascades Female Factory: This historic site outside Hobart is where up to 1,000 English and Irish women and, in some cases, their children, were imprisoned and forced to do back-breaking manual labour. The site, still under archaeological study, includes a guided tour with costumed actors who bring alive what life was like within the confines of the buildings. From Hobart, take Metro Bus numbers 446, 447 and 449 from Stop N (Franklin Square). Disembark at Stop 13, just past St John's Hospital, then walk down Apsley Street. (16 Degraves Street; open daily, 9.30 am to 4 pm; admission; reservations needed.)

Richmond: The charming village of Richmond is just 20 minutes' northeast of Hobart. As a former military post and convict station, Richmond is a repository of early- to mid-19th-century buildings, which run along its main street. They include the Richmond Gaol (1825), Courthouse (1825), Old Post Office (1826), St. Luke's Church of England (1834) and the country's oldest Catholic church, St. John's (1836). When walking north along main street, pass over the oldest (1823) bridge in Australia, a solid stone arch structure that spans the Coal River and was built by convicts. A model of Hobart in the 1820s is on display, having been built from the original plans. (21A Bridge Street; open daily, 9 am to 5pm; admission charge.) Hobart Shuttle Bus Company provides transfers in the morning and afternoon from the Tasmania Travel & Information Centre onboard the Richmond Historic Village Shuttle. (Corner, 16-20 Davey Street; 03 6238 4222)

Above & Beyond Tasmania: The operators of Tassie's only seaplane operation take pride in showing off the island state to locals and visitors. Moments after boarding Above & Beyond's City Scenic tour you will be cruising over a picturesque stretch of the River Derwent and its western shores and over to the white sandy beaches of beautiful Bruny Island where the vast forested landscape opens up. Enjoy the thrill of touching down at Port Arthur to view the UNESCO World-Heritage listed convict site from the water onboard the Three Capes Panorama tour, which soars over Cape Raoul and Mt Wellington and hectares of forested national parks.

Convict Trail: Curate your own self-drive one-to-three-day Convict Trail itinerary that wends its way from historic Richmond to the Tasman National Park, Eaglehawk Neck and onto the Port Arthur Convict Site and the 100-hectare prison facilities, the most extensive and intact in all of Australia. Learn about the physical punishments and psychological terror imposed on the prisoners and explore Government Gardens outside the prison. Make time to knock on a few cellar doors in the Coal River Valley, where you can taste award-winning cool-climate wines. Pick up a map from the Tasmania Travel & Information Centre (Corner, 16-20 Davey Street; 03 6238 4222) and plot some stops along the 205 kilometre drive.

Bonorong Wildlife Sanctuary: The Experience Tasmania bus tour of Bonorong Wildlife Sanctuary, just a short drive northeast of Hobart, will showcase the work being done by the centre to care for injured and orphaned animals. The half-day Experience Tasmania tour allows visitors to see some of Australia's quirkiest creatures up close -- such as Tasmanian devils, emus, echidnas, wombats, wallabies, quolls, kangaroos and koalas. With the aid of park rangers, you can hold and feed some of the animals and have photographs taken. The coach tour travels via the historic town of Richmond to see Australia's oldest Catholic church (St. John's), its early 19th-century Bridge Street and convict-built stone bridge. Visit experiencetas.com.au for more details.