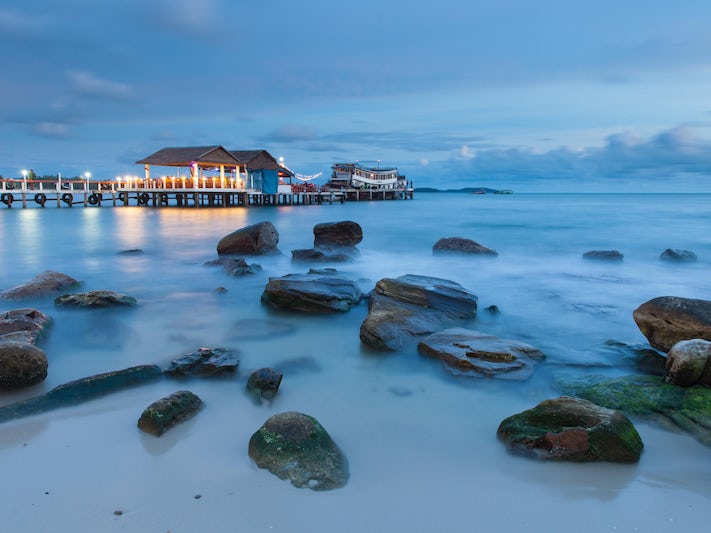 Find Things to Do in Sihanoukville on Viator

Popular Things to Do in Sihanoukville

Food and Drink in Sihanoukville

It's often said that Khmer cuisine is like Thai food without the spice. While that's a bit of a generalization, ingredients and techniques can be similar to those used for other Southeast Asian cuisines. You'll find spring rolls, mild curries, noodles, dishes made with pumpkin and, of course, lots of seafood. If you can, try amok, one of Cambodia's best-known dishes. A fish fillet is covered in a mixture of shallots, lemongrass, kaffir lime, garlic, peanuts, coconut milk and egg. That's all wrapped in banana leaves and steamed to an almost souffle-like texture. Cambodians also devour plenty of rice. In fact, the Khmer phrase for "Have you eaten?" is actually, "Have you eaten rice?"

No matter what your nationality, there's probably a Sihanoukville restaurant that caters to your tastes, thanks to the large expat community, and many establishments offer multiple cuisines. That's why it's strange that, in this area, it's not always easy to find authentic Khmer cuisine. On the plus side, no matter what the cuisine, prices are generally very reasonable, which is why few establishments accept credit cards.

Chhne Meas, on Victory Beach, is an open-air restaurant close to the surf. It serves a wide range of fish and seafood, as well as Khmer curries and stir-fry. (No credit cards are accepted; check their Facebook page for the rather complicated opening hours; +855 12 340 060.)

Chner Molop Chrey, also on Victory Beach (look for the distinctive Chinese-influenced roof), is a huge, open-air, Hong Kong-style seafood restaurant where you choose what you'd like -- clams, crabs, shrimp, scallops, unknown finned things -- from aquarium tanks. You'll practically be sitting in the lapping waves to dine. Photos of dishes help with ordering.

Cabbage Garden (or Jumka Spay in Khmer) is a non-touristy restaurant frequented by locals and expats in the know. Some (but not all) menu items are translated into English, and service may not be up to international standards, but fans rave about the flavors in dishes like steamed fish or squid with Kampot pepper, as well as the astonishingly cheap prices. The only caution: Don't visit the restroom. It's located on Makara Street, a bit off the beaten path. If you use its Khmer name, it may help drivers know where to go.

Beach shacks serve seafood BBQ and other fish dishes at Ochheuteal and Victory Beaches for bargain prices. Look for items like grilled squid or shrimp with lemongrass or Kampot pepper.

Snake House Restaurant provides a real change of pace, as you might guess from the name. The jungle-like setting up on Victory Hill (behind Victory Beach) houses a menagerie of exotic birds and reptiles, including crocodiles. The Russian ownership serves up cuisine from the mother country (pelmeny, borsht, chicken Kiev), as well as sandwiches and other international fare. (Soviet Street; +855 12 67 3805)

As long as we're veering toward the unusual, you mght take a gawk at the Airport Fashionable Disco Flight Beach Bar, the hard-to-miss hangar-like structure on Victory Beach (not at the airport!) that houses an old Russian AN-24 airplane. There, you'll find drinks, an international assortment of food (salads, shakes, BBQ, seafood, hotdogs) and beach massages. (open from 8 a.m. until "late"; +855-70-771-557)

If you happen to be in port long enough to eat dinner, Sandan gets glowing marks, not only for its creative Khmer cuisine (vegetarian amok, for example), serene atmosphere and good service -- but also because it's run by a nonprofit that helps train street kids to work in the service industry. (Street 10311, one block south of 7 Makara Street; open Monday through Saturday, 6 p.m. to 9 p.m.)

Sihanoukville is home to the Angkor Beer brewery, set atop Sihanoukville Mountain. So if you want to drink local, skip that cocktail, and order up an Angkor.

Best Beach for Paradise-Seekers: The private beach at five-star Sokha Beach Resort is about as idyllic as it gets -- a mile of pristine white sand, beach chairs, umbrellas and a (slightly pricey) bar. The beach is uncrowded and blissfully free from vendors or touts. The $10 entry fee also allows you to use the resort's pool. The onsite open-air restaurant serves a buffet lunch of Cambodian and Western foods.

Best Beach for the Indecisive: Victory Beach, just south of the port, offers restaurants, water sports, trips to nearby islands and two casinos: Queenco Casino at the Victory Beach Hotel and the Golden Sea Hotel & Casino. Oh, and there's also sand and water.

Best Beach for Budget Beachcombers: About five minutes from Sihanoukville town, Ochheuteal Beach is lined with seafood shacks and watering holes, fronted by legions of beach chairs. Roving vendors also hawk items like fresh calamari, grilled to order, for a pittance. The north end of this mile-plus swath of sand has come to be known as Serendipity Beach, and it's more developed, with Western-style restaurants, bars and plenty of shopping.

Best Beach for the Ghosts of Jetsetters Past: Independence Beach, named after the hotel (now refurbished) where Jackie O and Catherine Deneuve once stayed, is a favorite of locals and can get crowded on weekends. Though it was once nothing but sand, new restaurants are popping up.

Sihanoukville's world-famous beaches are definitely the area's main draw. Check our beach guide below to find one that best suits your style.

For nature-lovers, 80-square-mile Ream National Park is a good option. The area is home to 155 species of birds, including macaques, herons and cranes. You might also spot wildlife, like mouse deer (muntjac), spiny anteaters (pangolin) and sun bears. It's possible to trek with a ranger for $2 per hour, visiting Keng Kong waterfall or beaches. Or, take a boat tour (about $45 per boat) along the mangrove forest of Prek Teuk Sap estuary, where leaping fish and dolphins have been sighted. The estuary is salt water in the dry season and fresh water in the rainy season. If you plan to trek, take drinking water and a snack since food options are limited to stands on the beach. The park is about 11 miles from the port, with the entrance located on Airport Road, across from the airport. The beach is an additional six miles beyond the ranger station, which is just inside the park entrance. You'll need to arrange transportation by taxi or tuk-tuk.

There are five main wats, or Buddhist temples, in the Sihanoukville area. The two most popular with tourists are:

Wat Krom, or "Lower Temple," is at the base of Sihanouk Mountain, near Independence Beach -- a 5-minute drive from town. Rebuilt after it was destroyed by the Khmer Rouge, this wat has views of the sea and a small chapel dedicated to Ya-Mao, a local deity. There's also an interesting graveyard, with small stupa towers marking many graves.

Wat Leu, or "Upper Temple," is higher up on Sihanouk Mountain, about 3.6 miles from town. Be sure to look for the three-headed white-stone elephant that's integrated into the temple's surrounding fence.

If you want to plunge into the local scene, visit covered Psar Lu Market in Sihanoukville town. You'll see stalls with goldsmiths at work; mini-beauty shops; seamstresses operating foot-powered sewing machines; fish, live and dead; butchers whacking at bloody carcasses; produce-sellers; clothing stalls; food stalls, where cooks man huge woks of seafood; a few souvenir vendors and much, much more. It's fascinating, but prepare to be hassled at the entrance by drivers touting their taxis or tuk-tuks (just say you already have a driver if you want to fend them off), and you may also encounter beggars maimed in the war.

Photographers might enjoy a trip to the fishing port, Kampong Pier Nup Lok, about a mile and a half north of the port on Hun Sen Beach Drive. There's a ramshackle village around the wooden docks, with plenty of local color and activity, plus equal amounts of grime and stench.

Want to head off the beaten track? Try these options:

One of many nonprofit groups seeking to make a difference in Cambodia, Seeing Hands 3 Massage trains seeing-impaired people to perform massages -- and by all accounts, the result is excellent. (95 Mondul 3, Sangkat 4, Sihanoukville town ,near Holy Cow restaurant; +855 12 799 016; 8 a.m. to 9 p.m.)