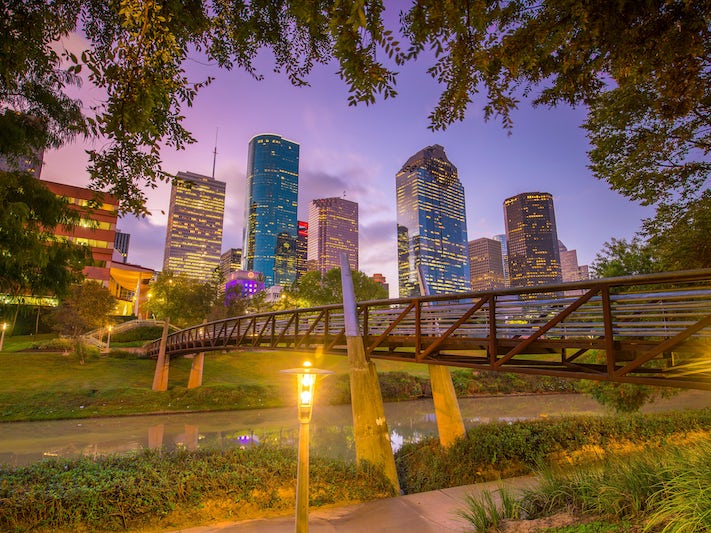 Popular Things to Do in Houston

Find Things to Do in Houston on Viator

Food and Drink in Houston

Houston is known for two types of cuisine: barbecue (Texas is known for its brisket, cooked slowly over indirect heat and wood; barbecue sauce is optional) and Tex-Mex (heavy on the cheese, meat and tortillas).

At the port, you'll find plenty of dining options. In addition to the restaurants listed below, a handful of area chains on the Kemah Boardwalk offer seafood and other cuisines.

In the Bay Area:

Brennan's of Houston (Part of the Commander's Palace family) is the place to go if you're celebrating a birthday, anniversary, graduation or other milestone. Executive Chef Danny Trace puts a creole twist on Texas cuisine that features fresh meat, fish, seafood and produce sourced from local vendors. Menu offerings include turtle soup, smoked shrimp and okra gumbo, fried green tomato and blue crab, blueberry creole and cream cheese pancakes, quail & waffles, shrimp and grits, and the restaurant's signature bananas foster dessert. There's also an extensive wine list. Bonus: you can snag 25-cent martinis when you buy an entree. If you're a foodie who's always wondered what it's like to work in a high-end restaurant's kitchen, check out Brennan's of Houston's "Chef for a Day" program. (See our "Been There, Done That" section for details.) (3300 Smith Street; 713-522-9711; open 11 a.m. to 2 p.m. daily for lunch or brunch, 5:45 p.m. to 10 p.m. daily for dinner)

A short drive from the Bayport Cruise Terminal, you'll find Space Center Houston, where you can take the official NASA Tour. You'll go behind the scenes at Johnson Space Center, where you may get a glimpse of Mission Control. You can see real spaceships and spacesuits, and kids will delight in the Angry Birds Space Matrix, the state's largest indoor play structure. (1601 NASA Parkway, Houston; 281-244-2100; open daily from 9 a.m. and closes between 5 p.m. and 7 p.m. depending on the season)

The Kemah Boardwalk is a 42-acre complex that features amusement park rides, midway games, waterfront restaurants and retail stores. Most of the rides were destroyed by Hurricane Ike in 2008, but they have been repaired, and two new rides were added during reconstruction. (Rides open Sunday to Wednesday 10:30 a.m. to 9 p.m., Thursday to Saturday 10:30 a.m. to 10 p.m)

The Houston Museum District contains 19 museums or attractions within a 1.5-mile radius of the Mecom Fountain, which is a landmark in the traffic circle at the confluence of South Main Street, Montrose Boulevard and Hermann Drive. Highlights include the Children's Museum of Houston; Contemporary Arts Museum Houston; Houston Museum of Natural Science; Houston Zoo; and the Museum of Fine Arts, Houston.

Want to see five top attractions for less than $50? Get CityPass Houston. Tickets cost $46 for adults and $36 for children (ages 3-11), and they are discounted 46 percent overall from regular admission prices. The ticket price includes entrance to Space Center Houston, the Houston Museum of Natural Science, the Houston Zoo or the Kemah Boardwalk, the Children's Museum of Houston or the Museum of Fine Arts, Houston, and the Downtown Aquarium (with a 500,000-gallon aquarium, rides, attractions and a full-service restaurant).

Shopping is a popular pastime in Houston, and the Galleria in Uptown is probably the most famous spot. Stores include Neiman Marcus, Gucci and Saks Fifth Avenue.

If you're a foodie who's always wanted see the inner workings of a real restaurant kitchen, consider heading downtown for Brennan's of Houston's "Chef for a Day" experience. It's a bit pricey, but you'll receive a personalized chef's uniform, a souvenir knife, a cooking lesson from Executive Chef Danny Trace and dinner in the dining room for you and up to five others. (Note: This activity is best for those who are spending time in Houston pre- or post-cruise. Call ahead -- 713-522-9711 -- for scheduling details, or complete the online "Chef for a Day" form.)

In the Bay Area, you can wander the tiny streets and take pictures of about two dozen brightly decorated fiberglass pelicans, which serve as landmarks in Old Seabrook, a town offering a handful of little homegrown shops and galleries. In Nassau Bay, check out the Arts Alliance Center at Clear Lakee, a place to see the work of basketweavers and quilters or musical and dance performances. In nearby Alvin, visit Bayou Wildlife Zoo to ride a tram past habitats serving as home to creatures from Africa, Asia, Australia and the Americas. (Open daily from 10 a.m. to 3 p.m. or 4 p.m. depending on the season)

For anyone interested in history, check out the San Jacinto Battleground State Historic Site, which is home to the San Jacinto Monument and Battleship Texas. The monument marks the site at which Texas won independence and became its own nation, and the battleship is the only one that served in both world wars and is still afloat.

You're also close to Galveston County's only commercial vineyard, Haak Vineyards and Winery, producer of the award-winning Blanc du Bois.

The Heritage Society at Sam Houston Park offers guided tours of historic homes in the park, which lies in the shadows of downtown's high-rises. Hiking and biking trails also wind through downtown along Buffalo Bayou.