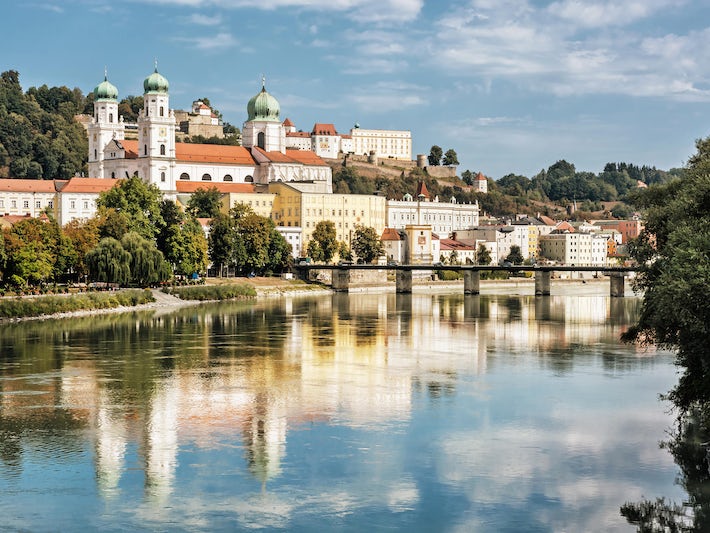 Find Things to Do in Passau on Viator

Popular Things to Do in Passau

Food and Drink in Passau

Passau has plenty of international and regional restaurants to suit most tastes. The local Bavarian cuisine is noted for its rib-sticking qualities. Think of large, salty pretzels served as appetizers, sausages accompanied by sweet mustard and schweinsbraten (a national dish of pork, gravy and dumplings), followed by apple strudel -- and you begin to get the idea.

With the longest brewing tradition in the world, Bavaria is home to half of all German breweries. On average, Bavarians consume 150 litres (40 gallons) of beer a year, and Passau's bars and beer gardens provide a wonderful opportunity to soak up this great tradition.

With daily specials from 11 a.m., the Bayerischer Lowe, or Lion Tavern, is a 10-minute walk from the dock at Dr.-Hans-Kapfinger-Strasse 3. With a large, covered beer garden, it serves local specialities and is one of the rare breeds of German restaurants that pays a nodding acquaintance to vegetarian dishes. It's open all day, so cruise passengers can drop by at any time.

If you've got a head for heights, you can enjoy coffee, cakes and light bites at Cafe-Lounge Diwan, on top of the Passau business tower at the end of the pedestrian area at Nibelungenplatz 1. It serves up the best views in town. (Open daily from 9 a.m. to 7 p.m. Monday to Thursday, until midnight on Friday and Saturday, and 1 p.m. to 6 p.m. on Sunday.)

Tuck into a pork fest at Hacklberger Braustiberl, a restaurant and beer garden specializing in Bavarian cuisine. An inexpensive, fixed-price lunch is served daily from 11 a.m. to 2 p.m. The main menu includes sausages in all kinds of guises and a choice of schnitzels influenced by nearby Austria. Located in Brauhausplatz 7, it's a 20-minute stroll from the town center, or you can get there by public transport.

You can pull out all the stops at St. Stephen's Cathedral at Residenzplatz 8 in the Old Town, where the world's biggest cathedral organ boasts 17,974 pipes and 233 stops. Rousing recitals take place on weekdays at noon and Thursdays at 7:30 p.m. (for a fee). Free entry to the lunchtime concert is included on many guided walking tours.

Hollgasse is Passau's best-known cobbled street. In the heart of the Old Town, the traffic-free lane is the place to find beautifully maintained medieval houses, art shops, galleries and jewellers, and to watch artists and craftspeople at work. There are also plenty of places to stop off and enjoy a restorative glass or two of Bavarian beer.

The imposing Veste Oberhaus fortress was built in 1219 by Passau's Prince-Bishops to keep a check on commerce on the three rivers. History buffs will enjoy the permanent exhibitions in the museum that chart Passau's timeline; it's also well worth the climb up the 130 steps to the viewing platform in the tower for panoramic views over the city. (Open daily from mid-March to mid-November from 9 a.m. to 5 p.m. Monday to Friday and 10 a.m. to 6 p.m. on weekends.)

Discover the treasures of Passau's past, when it was capital of the largest diocese of the Holy Roman Empire at the Museum of the Treasure of the Cathedral. Housed in the New Bishop's Residence in Residenzplatz, a palace built in the early 18th century, the museum features ornate Rococo staircases and a fresco of the Gods of Olympia. (Open from May to October from 10 a.m. to 4 p.m.)

Located in one of the Old Town's most beautiful houses on the bank of the Danube, the Museum of Modern Art showcases international works from the 20th and 21st centuries in a changing program of exhibitions. (Open daily, except Mondays, from 10 a.m. to 6 p.m.)

The Baroque town hall fronting the Danube dates back to the 14th century and is open to visitors free of charge. Visitors crane their necks to look at huge wall and ceiling paintings depicting scenes from the "Nibelungen," an epic German poem from the Middle Ages. (Open from 10 a.m. to 4 p.m. unless the town hall is being used for official business.)

When it's time to dig more deeply into Passau's past, visit the Roman Museum to see the foundations of the Roman fort Kastell Boiotro. The remains of the fort, with five defense towers and walls more than 3m (12 feet) thick, were unearthed in 1974 by workman excavating a 17th-century church. Pottery, lead figures and other artefacts from the area are housed in the museum at the edge of the site. (Lederergasse 43. Open from March to November, 10 a.m. to 4 p.m.)

The art of brewing flourished in the Baroque period, and Passau has four breweries. Soak up the local heritage on a "Beer and Baroque" excursion through the old town, ending in a brewery with the all-important tasting accompanied by Bavarian snacks. The three-hour tours are bookable through the dockside tourist information office, and they're available Monday to Thursday.

Step back in time at the Bavarian Forest Museum Village, located 20km (12.5 miles) from Passau. More than 100 old buildings -- including farmhouses, a mill and chapel -- have been painstakingly reconstructed at the open-air museum that also has rare breeds of farm animals, including sheep, cattle and poultry, and displays of rural crafts. Half-day excursions are bookable in Passau.

While most people head straight to the cathedral, take a peek at the cream and pink Church of St. Paul, the city's oldest parish church. Northwest of the cathedral and located by the north gate of the Old Town in Rindermarkt, the church dates back to the 11th century and was rebuilt after the city fires.

Pilgrimage Church Mariahilf, across the bridge on the Inn side of town at Mariahilfberg 3, is reached by a "heavenly ladder," a covered staircase of 321 steps where pilgrims kneel and pray on each step. According to legend, anyone who scales the stairs this way while praying can expect their wishes to be granted. Skeptical? Well, Austrian Emperor Leopold I took three days to climb up on his knees and beg assistance in the fight against the Turks who were besieging Vienna, and it worked for him in 1683. While the interior of the church is quite plain and simple, there is a beautiful golden high alter dating back to the 18th century and ecclesiastical silver treasures in the old sacristy that is now a small museum.