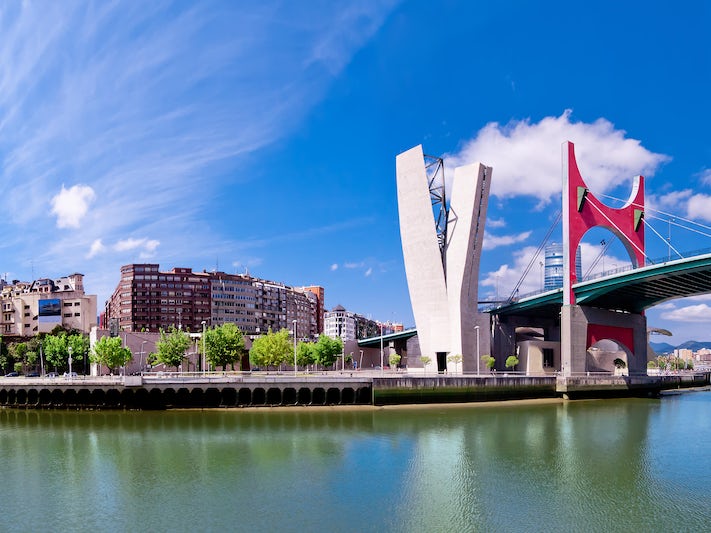 Find Things to Do in Bilbao on Viator

Popular Things to Do in Bilbao

Food and Drink in Bilbao

International visitors generally agree that Bilbao and neighboring San Sebastian offer some of the best food in Spain, especially if you are a seafood-lover. Try mussels in a tomato and anchovy sauce, squid cooked in its own ink (the first sight of the black goo takes a bit of getting used to), and salted cod with mushrooms in a garlic sauce or lemon and parsley. Another favorite is thinly sliced Jamon (ham) Iberico; it comes from local pigs that carry more fat. Hence, it can be cured longer to give a more intense flavor. Most restaurants will have multilanguage menus posted outside with prices. Lunch hours are generally noon to 3 p.m. No reservations are needed.

In the Casco Viejo (Old Quarter), one block in from the Teatro Arriaga, Berton -- at Calle Jardines, 11, with a second branch across the street -- is the place for pintxos (a kind of Basque tapas), with the tasty selections lined up on the bar. Choose what you want, no language translation needed, and add a glass of Rioja (txakoli) wine -- blanco (white), tinto (red) or rosado (rose). The selections will include croquettes stuffed with squid, smoked and thin-sliced ham, eggplant or sardines, anchovies, and eggplant, or stuffed egg and ham on sliced, toasted bread. It may be quite crowded during peak lunchtime hours.

Amboto, Calle Jardines, 2, has a bustling tapas bar on the street level and a handsome, wood-paneled restaurant upstairs away from the fray. Order a la carte, or choose from a set menu at a moderate price that includes an appetizer, main course, dessert, bread, water, wine and taxes. Tasty starters are a thick fish soup, king prawns, and mushroom pudding, as well as Iberian sirloin with blue cheese, peppers stuffed with crab, and hake (merluza, a fish) in a sauce made from crabs. Finish up with a puff pastry stuffed with cream and chocolate, or orange juice with ice cream and liqueur.

The Bistro at the Guggenheim Museum has tables with river views, and it makes an easy and convenient choice when visiting the galleries. Try the seafood soup with squid, hake and mussels; stewed baby squid in a creamy rice; or boned cow's tail, toasted with caramelized onions and its juice. Finish off with a fluid chocolate souffle with frozen cream.

Museo Guggenheim is the city's biggest attraction. The exterior of architect Frank Gehry's masterpiece is made of angular shapes entwined with one another, and the stainless steel core is covered by a shiny titanium skin that will not tarnish nor rust. The complex rests by the river on land that was once a shipyard. The Bilbao Guggenheim was designed to reflect the city's industrial past, to be an icon for the future and to transform the former working riverfront into an attractive park. Before or after the visit inside, be sure to view the building from all angles and appreciate how well it fits into the landscape created by the red arched Puente de la Salvei Bridge.

Inside, the central atrium (photography allowed) soars around and above you, while visitors on the higher floors can look across, downward and out onto the river. The galleries, with different shapes and sizes, lead off the atrium, where photography is not permitted. Don't abuse the rule; you will be spotted.

Casco Viejo (Old Quarter): The Casco Viejo, about a half square mile, is characterized by rows of handsome five-story residences with balconies and colorful bay windows that hang over mostly traffic-free streets. Cafes, restaurants and shops occupy the ground floors. Small squares feature churches small museums as centerpieces. The best place to start is Plaza Arriaga outside the neo-Baroque Teatro Arriaga, located just across the Arenal Bridge from the two railway terminals and the main shopping street. A tourist office is located inside.

The Catedral de Santiago suddenly appears ahead and above as you walk into the Plaza Santiago. It was first built in the 14th to 15th centuries, but an elaborate Renaissance portico and graceful spire were added later. One block away in Plaza Miguel de Unamuno, Museo Vasco displays tableaux of rural Basque life, and in the cloister, the Idolo de Mikeldi, an Iron Age stone sculpture, looks like an early depiction of the cow that jumped over the moon.

From this neighborhood, most streets lead down to the largest covered market in Spain, the Art Deco Mercado de la Ribera, sitting grandly along the riverfront. (As of 2012, it was under reconstruction and not open to the public). Next door is the lovely San Anton church with an attractive bell tower and decorated portico. Museo des Bellas Artes: Located adjacent to a beautiful park and across from the soaring elliptical Cesar Pelli's Torre Iberdrola, the city's original art museum houses a much more traditional collection that has greatly benefited from the influx of visitors to the city -- see its new wing. The comprehensive Catalan art survey begins in the 13th century, when the region became prosperous, with Romanesque panels, late Gothic paintings and altarpieces, Flemish works by Brueghel and Van Dyck, El Greco's Annunciation and Ribera's St. Sebastian Treated by the Holy Women, plus Murillos and Goyas. French artists are represented by Gauguin and Cezanne, and there are a few portraits by American Mary Cassatt. A fine collection of Basque art includes portraits and sculpture. (Plaza del Museo, 2. Open Tuesday through Saturday, 10 a.m. to 8 p.m., and Sunday from 10 a.m. to 2 p.m.)

The Ensanche: Bilbao's industrial boom led to the creation of a major business center across the river. The area was bustling from the late 19th century through the Art Deco 1930's, and then again post-WWII, but it quieted down during the downturn in the cities fortunes around the 1980's. Now, greatly increased tourism has revived the Ensanche, and visitors to its vibrant city center can enjoy its rich architecture and stylish shopping options. From the Casco Viejo, cross the Nervion and continue up to the Plaza Circular. There begins the Gran Via de Don Diego Lopez de Haro (Bilbao's founder), -- lined with offices, banks and intriguing shops (note the haut-relief on the facade of the department store El Corte Ingles at numbers 7-9) -- that leads to Plaza Moyua. Facing the square is the Chivarri Palace, an early-20th-century Flemish-style building where every set of windows is different; it's home to the provincial government. Opposite, the three facades of the 1926-built Carlton Hotel face the plaza, and inside a graceful elliptical stained glass dome arcs over the main foyer. Divert three blocks along Alameda Recalde to the Alhondiga, an elaborate turreted former wine warehouse (1909) that was transformed by Phillippe Starck into a multipurpose site for restaurants, shops, meeting spaces, a library, a gym and a swimming pool. Enter through the open arches into a vast, if a bit gloomy, interior courtyard that's held up by decorative columns and overlooked by a massive sunburst.

Nervion Riverside Walkway: The former industrial waterfront has been transformed into a linear park that begins at the Arenal Bridge at the edge of the Casco Viejo and sweeps in an arc past the Museo Guggenheim to the Museo Maritimo de Bilbao. You can enjoy a leisurely walk from end to end in only an hour, and a tram line parallels the park if you don't want to walk back. On your walk, you'll pass the Ayuntamiento (town hall), an impressive row of houses and former warehouses that are now lofts and art galleries, and the Puente Zubizuri, a glass-decked pedestrian bridge. Around the halfway point, you'll find the Museo Guggenhiem; past that are the Palacio de Congresos y de la Musica Euskalduna, the curving arched Puente Euskalduna, and the Museo Maritimo Ria de Bilbao, where visitors of all ages can learn about Bilbao's maritime history with indoor and outdoor exhibits.

Monte Artxanda: For a terrific view of the city, cross the Puente Zubizuri, and walk three blocks to the Plaza Funicular for a ride (every 15 minutes) to the park atop Mount Artxanda. You can view the arc of the Nervion River as it encloses a large portion of the city on the flat land below. All around are more hills, and you can see as far as the Bay of Biscay. Located there are restaurants and picnic areas that are popular with the locals on weekends. (Funicular hours: Monday through Saturday, 7:15 a.m. to 10 p.m.; Saturday and holidays until 11 p.m.; Sunday, 8:15 a.m. to 11 p.m.)