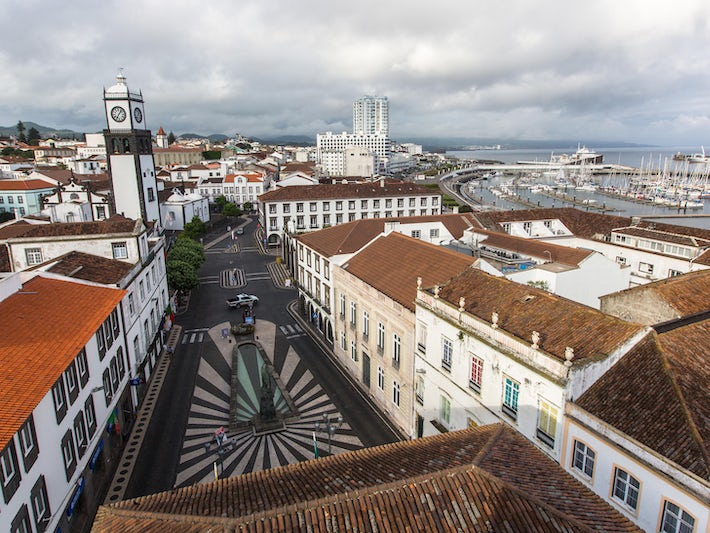 Find Things to Do in Ponta Delgada on Viator

Popular Things to Do in Ponta Delgada

Food and Drink in Ponta Delgada

Fresh seafood of all kinds, from the common cod and tuna to the more exotic shark and octopus, is available in the local cafes and restaurants at reasonable prices. Pastries are another specialty sold in small cafes and as desserts with meals. There are several restaurant choices just outside the cruise terminal and many more along the Avenida do Infante Dom Henrique and the parallel streets inland from the seafront. Restaurants generally serve lunch until 2:30 or 3 p.m. Reservations are not necessary.

Mercado do Peixe: Descend a half level downstairs to this fish restaurant where the catch of the day is laid out on ice before you. You choose your rockfish, sea bream or tuna and have it grilled or served as a fish kabab. Shellfish mixed with rice, served in a pot, is another good selection. (Avenida do Infante Dom Henique, 15.)

Postelaria com Fabrico Proprio: Located on a back street three blocks inland and parallel to the seafront boulevard, this small restaurant serves a mostly local clientele. Food is ordered at the counter, with the specialties of the day on display. Try the fish soup, cod casserole with eggs and potatoes, and home-baked pastries. (Rua Merchado dos Santos, 75.)

Volcanic Lakes: The Azores archipelago is noted for its volcanoes (most recent significant volcanic activity took place in 1957) and resulting craters, as well as beautiful green mountain scenery. Two of the main attractions are Fire Lake, set in a nature reserve seen from Pico de Barrosa, and Siete Cidades Crater Lake, viewed from the rim at Vista do Rei or at lake level from the village of Sete Cidades. One lake is a deep blue, and the other a contrasting rich green. A bonus to visiting the lakes is the drive along coastal roads and through pretty villages noted for their charming Catholic churches. In the spring, hydrangeas and Easter lilies abound.

Ponta Delgada: The town of Ponta Delgada, the main commercial center and port, is quite charming, featuring sidewalks paved with black and white volcanic stones in distinctive patterns. Many buildings have whitewashed facades with brown-black window trim and reddish pipe roofs. From the cruise terminal, walk ahead to Avenida do Infante Dom Henrique and then left along the harborfront, lined with stores, cafes and restaurants. At the Praca GV Cabal, the square is enclosed on three sides and dominated by whitewashed, triple-arched town gates, trimmed in black volcanic stone, and a handsome, tall, square clock tower. The tourist office is located there.

Convento da Esperanza and Igreja de Santo Cristo: The Convent of Esperanca and the Church of Santo Cristo is located in the town center, near the Forte (Fort) Sao Bras. Inside the church and to the right is a public chapel with an enormously elaborate gilded arched ceiling and engaged columns; to the left is a lovely private chapel for the nuns. The meditation foyer between the two is tiled with soft blue and white murals. At right angles stands the Igreja de Sao Jose (Church of San Jose), much larger and plainer, using grey stone blocks for the columns, but with an elaborate gilded altar and arced ceiling above.

Island Tours: For the independently minded, one alternative to the ship's shore excursion program would be to hire a taxi for a half day or full day and ask the driver to make one of two circuits. For the eastern half of Sao Miguel Island, visit scenic Lagoa do Fogo (Fire Lake) from the viewpoint of Miradouro da Serra da Barrosa and make stops in Villa Franca do Campo and Ribeira Grande, two attractive seaside towns. For the western end, make stops at Sete Cidades, a village on the shore of Lagoa Azul and close to Lagoa Verde, and the viewpoints Vista do Rei and Santiago Land. If taking off for a full day, stop for a seafood lunch; the catch of the day will be fresh and the prices moderate. Alternately, skip the taxi, and rent a car instead. It is simply a pleasure to enjoy the ever-changing scenery from dramatic headlands and steep mountain slopes to the rolling pasturelands between small villages.

Hiking: The island is laced with walking trails, some half-day and full-day treks, as well as very short jaunts that are simply an excuse to leave your car. Get some exercise by spiraling down to a secluded, sandy beach or following a circular path along the coast and then double back. Hiking maps are available at the tourist office in Ponta Delgada. You'll want to rent a car to facilitate independent exploration.

Tea Plantations: Two tea plantations are located near Ribeira Grande on the north coast, and not surprisingly, they may be the only ones in all of "Europe." Gorreana's European Tea Factory & Museum offers tea-tastings and tours of the estate and gardens daily (10 a.m. to 5 p.m.). The Porto Formoso Tea Factory also offers tours and tastings; it focuses on the history of tea production in the Azores.