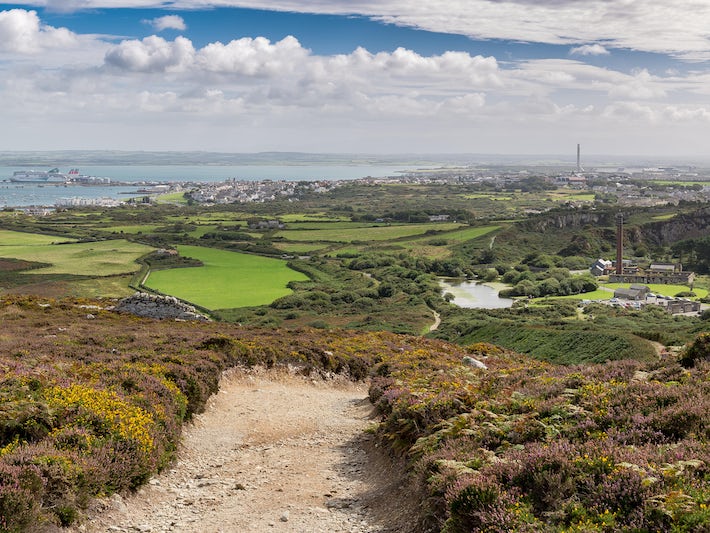 Find Things to Do in Holyhead on Viator

Popular Things to Do in Holyhead

Food and Drink in Holyhead

Holyhead does not have much to offer in the way of eating that would appeal or excite the visitor, so the best places to enjoy a quick snack or a full meal are at the various excursion destinations. Given the country's 11 million sheep, lamb dishes are very popular. Fresh seafood, caught off Wales' long coastline, is also a favorite, especially the North Sea cod and Conwy Bay mussels. The latter are some of the most naturally flavorful you will find anywhere, and they may be steamed and served in a white wine, garlic or cream sauce. The local pasty, a baked pastry served hot and wrapped around a filling of meat and/or diced potato and onion, is a popular snack.

In Conwy, Aldredo's, with red and white checkered tablecloths and dark wood paneling, offers a moderately priced Italian menu for lunch and dinner, as well as a prix fixe menu. Specialties are mussels in a creamy garlic sauce, freshly made pizzas and seafood (shellfish) risotto. It's located in the center of town. (York Place, Lancaster Square. Tel. 01492 592381. It's open daily for lunch from 12 to 3 p.m. and for dinner from 6 to 11 p.m.)

Amelies is a cozy, 12-table, moderately priced restaurant frequented by locals, located up a flight of stairs on the town's main street. Try the salmon and crab cake starter with a sweet chili and sesame drizzle sauce; baked filet of cod (local) with a Welsh rarebit crust; and roast breast of duck with an orange and ginger sauce. (10 High Street. Tel. 01492 583142. ?It's open daily from 6 to 9:15 p.m.)

Beaumaris: Bulkeley Hotel, located on the main street and built in Georgian style in 1832, offers a choice of venues. You'll find a coffee shop, pub with bar food, the Bistro and fine dining in Hansom's. The Bistro offers the Bistro Belly Buster (a mixed grill), a daily roast like lamb and roast beef, and lighter fare sandwiches. An open terrace has the same menu on warm sunny days, with views out to the Irish Sea, mountains of Snowdonia and beginning of the Menai Strait. (19 Castle Street. Tel. 0845 373 0834. Restaurants are open daily from 12 to 2 p.m. and from 6 to 9 p.m.)

A couple of doors to the right, at the informal Castle Cafe, you order your food at a counter and eat it at one of a dozen tables opposite or up a few steps in a separate back room. Choices include a French toasted baguette with ham, red Leicester cheese, pineapple and Spanish onions, and a Welsh pasty with beef, potatoes, carrots, onions with peas, chips and gravy. (It's open daily from 9 a.m. to 9 p.m.)

Porthmadog: If you're in Porthmadog to take a trip on the Ffestiniog or Welsh Highland Railways, stop in Cadwalader's on the High Street, which serves freshly made meat pies, sausage rolls, pasties, homemade ice cream, sundaes, smoothies and cupcakes. Restaurants under this name are also found in Llandudno, Betws-y-Coed and other Welsh towns that regional visitors might frequent. (43 & 47 High Street. Tel. 01766 514235. It's open daily from 10 a.m. to 9 p.m.)

The most charming town in all of North Wales is Conwy, a medieval walled village with an outstanding late-13th-century castle sited on a rocky headland overlooking the town, bay and river estuary of the same name. Climb up any of several towers for views of the town, the 1826-built Telford suspension and tubular railway bridges, the sea and the surrounding hills. The seafront is lined with fisherman's cottages, including the smallest house in Great Britain with a 9-foot-by-6-foot two-story floor plan. The main road enters the town via one of several stone gates that are connected by stone battlements and 22 towers. Much of the wall can still be walked.

The town has several historic buildings, such as the large Elizabethan-era residence of Pas Mawr and the National Trust's 15th-century Aberconwy House, both beautifully furnished. St. Mary's, a 13th-century Anglican church, is tucked in behind Castle and High streets. Both streets also house gift stores, food stores, restaurants, pubs and the attractive Castle Hotel, with multiple dining and drinking options. Conwy is an hour's drive or train ride from Holyhead.

Caernarfon Castle is probably the best known of North Wales' outstanding collection of fortifications, built during Edward I's reign. Completed in the late 13th century next to the Soient River, the king saw to it that his son, the first English Prince of Wales, would be born there. Hence, the castle was designed as a royal palace in addition to being a stronghold to protect English settlers. The most famous investiture took place there in 1969, when Prince Charles was crowned Prince of Wales. Climb the polygonal towers, and explore the many museum rooms dedicated to the history of the Royal Welch (archaic spelling) Fusiliers, Wales' proudest and oldest regiment. The castle dominates a large town square, where stalls selling souvenirs, antiques and fresh produce are set up. Just off the square is the terminal for the narrow-gauge, steam-powered Welsh Highland Railway that operates to Porthmadog and connects with the Ffestiniog steam railway. Caernarfon is an hour's drive or combined train and bus ride from Holyhead.

Beaumaris is the site for the largest and last of Edward I's line of medieval coastal fortresses built in Northwest Wales. The concentric design has a moat and both inner and outer walls, rendering it almost impregnable. It faces adjacent sheep pastures and the entrance to the Menai Strait, dividing the Isle of Anglesey from mainland Wales, and looks across the sea to the Great Orme headland at Llandudno. The adjacent town is also a charming stop for souvenir shopping, a meal and a walk along the sea front. Take a train to Bangor and connecting bus with a stop across the street from the station.

The narrow gauge Ffestiniog Railway, running over 13.5 miles of twisting mountain track, qualifies as the oldest continuously operated rail line in the world. Completed in 1832 to carry slate from Blaenau Ffestiniog to Portmadog, the line operates steam-powered trains for tourists and regular passengers. From Portmadog, the line first travels across a long causeway and enters pasture land before beginning a long climb, including a spiral track, past waterfalls and into the mountains of Snowdonia National Park. Treat yourself to first-class travel in the observation car positioned at the end of the train, which offers a big window looking back along the tracks. The line connects to standard gauge trains operated by Arriva Train Wales at both ends so you can make a continuous loop or go out and back via Portmadog, both options possible with the typical eight-hour port time allotted.

For a completely different outing and one usually not offered as a shore excursion, take the train from Holyhead to Llandudno, Wales' premier seaside resort, with its high Victorian character intact. (Trains run hourly, taking about 75 minutes, usually with a change at Llandudno Junction.) Nestled beneath the Great Orme, an egged-shaped limestone headland, Llandudno has all the ingredients that once drew and still draw lots of visitors to a splendid, crescent-shaped, seafront esplanade; arcaded shopping stores along Mostyn Street; a 1,234-foor pier with kiosks and amusements that extend out into the Irish Sea; and the Great Orme Tramway that, since 1902, has taken visitors to the top of the headland. On a clear day, the view extends out across the sea to the Isle of Mann and north to the Lake District. A scenic drive, leaving from the town center, circles the headland, and a vintage tour coach stops at viewpoints and close to the lighthouse that now operates as a bed and breakfast.

Visitors like to pause at Llanfairpwllgwyngyllgogerychwyrndrobwyll-llantisiliogogogoch, the longest place name in Europe, to have their photo taken in front of the sign at the local rail station. Located on the Menai Strait near the 1850-built Britannia Bridge, the name translates to "The Church of St. Mary in a white hollow by a hazel tree near a rapid whirlpool by the church of St. Tisilio by a red cave." The short form of the name is simply "Llanfair P.G." Besides a store (Pringles) selling woolen goods and souvenirs, there is not much else there. Shore excursions all pause there, and trains make a flag stop so you can snap your photo.