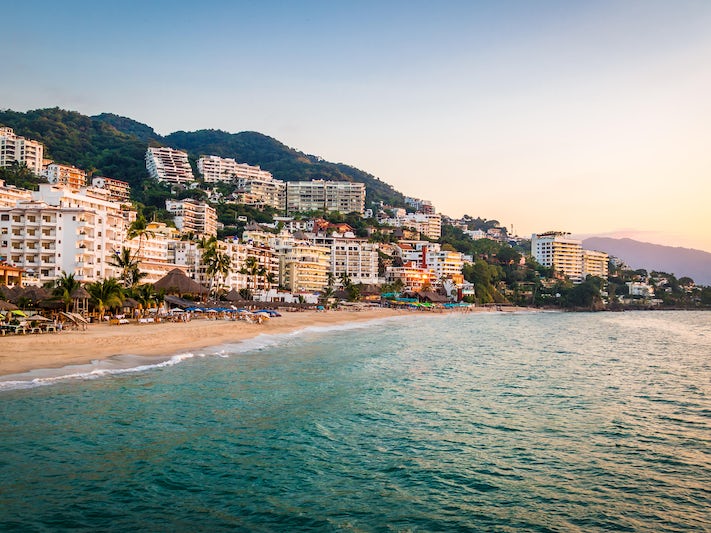 Popular Things to Do in Puerto Vallarta

The former Mexican fishing village of Puerto Vallarta has come into its own as a tourist destination, becoming a scenic haven for cruisers interested in history and culture who still want a classic seaside resort experience. The warm-water beaches make for popular shore excursions with snorkelers, water sports enthusiasts and sunbathers alike, while others will enjoy shopping and sightseeing in "old town." Ecotours and safaris are a good excursion option for wildlife enthusiasts hoping to get a glimpse of the area's humpback whales, Pacific dolphins and many other wildlife species.

Puerto Vallarta can get incredibly hot and humid year-round, but especially during the summer. Cruisers should take precautions against heat exhaustion and dehydration, especially when sightseeing and during jungle excursions. Currency is the Mexican peso, and though U.S. dollars are accepted almost everywhere, you might actually save a few dollars by converting to the local currency. Locals speak Spanish, but English is common in areas popular with tourists.

Find Things to Do in Puerto Vallarta on Viator

Food and Drink in Puerto Vallarta

With an affluent expat population, Puerto Vallarta has emerged as one of Mexico's top foodie cities, with upscale restaurants and famous food stalls alike. Seafood is fresh, as befits its Pacific location, and ceviche is a popular offering in many restaurants. Vendors also sell barbecue shrimp on a stick at the beach; we recommend avoiding these unless you've actually witnessed them grilling the shrimp.

Meat-lovers should head straight for birria, a regional Jaliscan beef and goat stew served with tortillas, onion and lime, or the ubiquitous carne asada, steak tacos sold at stands with myriad salsas. (Note: For the best food stalls, look for a line of locals.) What's nice about Puerto Vallarta is that ships often depart long after dinner, allowing passengers to enjoy several meals onshore.

Puerto Vallarta is in the Mexican state of Jalisco, which also contains the town of Tequila. So naturally, the spirit is at the heart of all drinks. If you want to sip like a local, avoid the margaritas and order your tequila bandera style, which means three sipping glasses: one with lime juice, one with white tequila and one with sangrita, a sour and spicy drink made from orange juice and tomato juice. Drink them in that order.

River Cafe: For meals with a view, try this cafe along the Rio Cuale. The atmosphere turns romantic at night, with candles and live music. (Isla Rio Cuale 4; open 8 a.m. to 11 p.m. daily)

The Sea Monkey: A popular beach spot recommended on the Cruise Critic forums, free internet and outstanding fish tacos are the main draws -- along with \$1 beers and margaritas. (Aquiles Serdan 174; 9 a.m. to 9:30 p.m. daily)

Mariscos 8 Tostadas: This seafood venue is only open from 11 a.m. to 6 p.m. because it brings in only enough fresh seafood to last during those hours. A favorite with locals, it's often crowded, but the seafood tostadas and other freshly created specialties are worth the wait. (Quilla y Proa Local 28-29)

La Leche: If you're looking for an upscale gourmet experience with Puerto Vallarta's version of a celebrity chef, you can't beat La Leche, where Alfonso Cadena is at the helm. Expect Mexican ingredients, such as avocados, pineapple, seafood and chiles, served with modern techniques. (Francisco Medina Ascencio km 2.5.; +52-322-293-0900; open 6 p.m. to 1 a.m. daily; reservations recommended)

Visitors can't go wrong with a little beach bumming, either at Playa de los Muertos in the lively Romantic Zone or at one of the resorts that line the Hotel Zone. Among the nicer options is the Sheraton Buganvilias (the closest resort hotel to town), but all are pleasant, accessible and offer bars and restaurants.

Best for Resort Lovers: Most hotels and resorts near the Golden Zone close to the port offer day passes for cruise passengers, with extended hours that reflect the longer hours that some ships dock in Puerto Vallarta. Nice options include Casa Velas, an adults-only resort that has an infinity pool, cabanas, breakfast and lunch. There's also Now Amber, an all-inclusive resort that has a kids club, daily activities, three pools, several restaurants and drinks. Both resorts offer beach access.

Best for Active Types: Playa de los Muertos boasts a happening pier, along with the city's best people-watching, water activities and beach bars/restaurants. Among our favorite spots on this beach is the Miami-vibed (and gay-friendly) Mantamar Beach Club at the far south end, which has standup paddleboarding, kayaking, scuba and snorkeling available. There's also a spa on the premises. A day pass for the pool is about 900 pesos, which includes 350 pesos worth of food and drink.

Further Afield: Playa Mismaloya, set in a cove south of Puerto Vallarta, was the site of filming for "The Night of the Iguana," although hurricanes and construction have eradicated its "lost in paradise" appeal. Still, it's a nice place for a standard beach day, with seafood restaurants, vendors, hotels with day passes and water activities.

Malecon: The restored walkway that rings the bay -- occasionally waves crash against the rocks so hard that plumes of salt water rain down on passersby -- is known for its sculptures, including a 9-foot-tall bronze sea horse. The original was knocked into the bay by Hurricane Kenna in 2002; the one there now is a replica created by artist Rafael Zamarippa. Two other sculptures of note are the whimsical high-backed chairs ("La Rotunda del Mar") by renowned Guadalajara artist Alejandro Colunga and "In Search of Reason" -- a tall ladder being climbed by two children, reaching down to a mother figure below -- by Sergio Bustamante. Opposite the main square is The Friendship Fountain, featuring three playful dolphins, created by California sculptor James Bottoms.

El Centro: Downtown Puerto Vallarta is filled with colonial architecture. It also features a main square (Plaza de Armas) near the malecon that often has bands playing and the Church of Our Lady of Guadalupe (located at Calle Hidalgo), the religious anchor of the city. Built over a 12-year period starting in 1929, the church is filled with architectural detail. The lacy crown on top of the bell tower was replaced after an earthquake destroyed the original, which was said to be a replica of a tiara worn by the Emperor Maximilian.

Rhythms of the Night: Because ships often stay overnight, several tour providers offer Mexican-style dinner shows. The most popular is Rhythms of the Night, offered by Vallarta Adventures (bookable through your cruise line) on Las Caletas, an uninhabited island. The five-hour tour includes a sunset cruise to the island, a buffet dinner with Mexican food and alcohol beverages and a show that includes performances by Mexican dance troupes. (888-526-2238; \$139, ages 6 and older)

Rio Cuale Flea Market: This two-story market filled with vendor stalls is an ideal place to test your bargaining skills. You'll find leather goods, woven goods, pottery and silver (which used to be a good value in Mexico but is now a tourist's black hole). Try to shop just before you head back to the Marina Vallarta and your ship; that's when you can get the best bargains, up to 60 percent off the original asking price. Before that, go for a walk along the river and especially visit the island in the middle, which is shady, cool and colorful. (El Centro, by the river)

Vallarta Food Tours: As many ships depart the port late in the evening, you'll have time to enjoy a meal -- or two. Better yet, walk through the city with Vallarta Food Tours. The three-hour day tour takes you to several taco stands, a tortilla factory, a candy factory and a cevicheria. (Avenue Mexico 1193, 5 de Diciembre; 322-222-6117)

Further Afield (or Jungle): Adventurous explorers can check out the region's jungles and waterfalls through numerous tour providers, which offer half- and full-day trips. Popular options include ziplining, ATV tours and horseback riding. If water is more your thing, surfing, jetboarding, scuba, sailing, snorkeling and kayaking are all available. The eco-inclined can go whale-watching, visit a turtle camp, try sea kayaking and watch birds via numerous outfitters.

La Casa del Habano: Cigar aficionados can hang out in the other-worldly "men's club" of La Casa del Habano, Puerto Vallarta's most upscale humidor and shop for Cubans. Downstairs, the cozy, clubby (cigar-friendly, of course) bar, offering everything from cappuccino to malt whiskey to tequila, is a great hideaway. (Aldama 170; +52-322-223-2758; open noon to 9 p.m., closed Sundays )

Golf: Lovers of the game have myriad choices in the region. Two golf courses, just minutes away from the Marina Vallarta at Vista Vallarta Golf Club in the Sierra Madre foothills, have gained acclaim since they were built in 2001. The Jack Nicklaus Signature Course is closer to the water, while the Tom Weiskopf Signature Course appears carved out of the jungle. Both are par 72, with longer fairways on the Nicklaus course and a tighter layout on the Weiskopf.

There are also two highly lauded (and pricey) courses at the Four Seasons Resort in Punta Mita, about 45 minutes north along the bay. Finally, the Marina Vallarta Golf Club, located in the Marina Vallarta area, offers a jungle-like course with spectacular foliage, indigenous birds and iguanas. A note that many of the above facilities do not accept U.S. dollars.