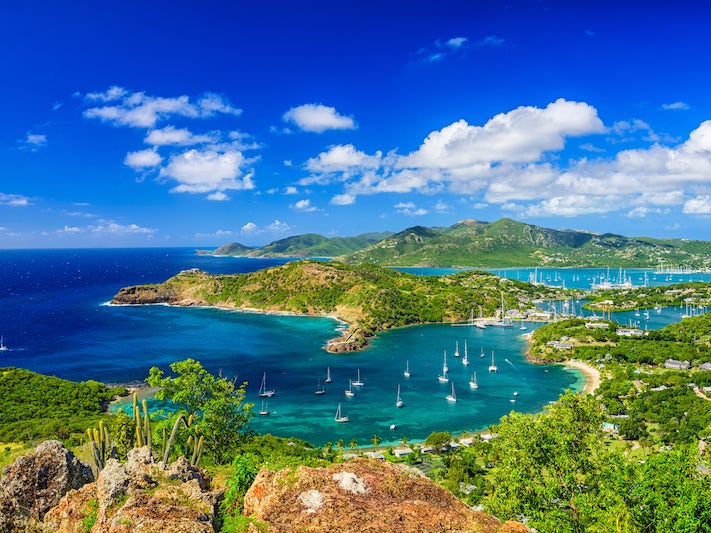 Popular Things to Do in Antigua

If you love nothing more than to lounge around on a gorgeous beach with clear turquoise-hued waters all day, Antigua is a cruiser's dream come true. The Eastern Caribbean island boasts tons of beaches -- both large and small -- each with its own vibe and personality. If you're into sailing and water sports, you'll most certainly enjoy those excursions in Antigua, or you can tour historic Nelson's Dockyard or a rum distillery. You can even hop on the ferry to tiny neighboring Barbuda to check out the scenic beaches there.

Antigua is typically hot, but not oppressively so. It's rainy during the winter, and in the summer months, it can get very humid -- uncomfortable at times -- making it a less popular time of year to visit. Most vendors and shops accept U.S. dollars, but the island's official currency is the East Caribbean dollar. English is the official language in Antigua, though you might find that some locals speak primarily in Spanish.

Find Things to Do in Antigua on Viator

Food and Drink in Antigua

Antigua's international yachting crowd supports a broad range of restaurants and cuisines -- more than you might otherwise expect to find. So, if you're craving Italian, French or even sushi, you'll find options. Plenty of hangouts are located around Heritage and Redcliffe Quays and at more far-flung eateries at beach resorts around the island.

If you go for local cuisine, beware -- it's spicy, and there's often a bottle of hot sauce on the table to kick it up even more. Look for dishes like fungee (pronounced foon-jee-- and sometimes spelled fungi or fungie), a cornmeal dish similar to polenta; ducana, a side dish made from sweet potatoes, grated coconut, sugar and spices and steamed in a banana leaf; chop-up, a mixture of eggplant, spinach and okra, all chopped and mashed together; pepperpot, a stew of meat and vegetables, flavored with hot peppers and cinnamon; and dishes made with dried, salted fish, known as "salt fish."

Wash it down with a Wadadli beer, spicy ginger beer or fruit juice.

Roti King: This little joint in downtown St. John's is so popular with residents that some flavors of its rotis sell out early. This version is quite different from roti you find in other parts of the world. It's Indian food by way of Trinidad, with plenty of Caribbean flavor. Large pasty disks, like tortillas, are wrapped burrito-style, around savory curries, including pork, potatoes, chicken, shrimp or conch; there's also a veggie version. One is enough to feed two people. There's nothing fancy. You eat from paper plates but leave satisfied. (St. Mary's Street and Corn Alley, St. John's; open 8:30 a.m. to midnight Monday to Saturday)

Dockyard Bakery: If you're looking for a quick, tasty bite while exploring Nelson's Dockyard, this bakery is perfect. The friendly staff make sandwiches and delicious but spicy, Caribbean-style meat turnovers. You can also pick up turnovers filled with the famous black pineapple. And if you like ginger with a kick, don't miss the ginger beer. Enjoy it all seated at an outdoor picnic table. (Behind the Dockyard Museum, Nelson's Dockyard; open 8 a.m. to 5 p.m. Monday to Saturday)

Shirley Heights Lookout: The restaurant is built into the historic fortifications at Shirley Heights, site of Antigua's best views. This Caribbean/seafood eatery is a nice stop if you're visiting Nelson's Dockyard and taking in the scene. It hosts a barbecue with live steel drum music beginning at 4 p.m. Sundays. (Shirley Heights; 268-728-0636 or 268-764-0389; open 9 a.m. to 10 p.m. Tuesday to Sunday and until sunset Monday)

Coconut Grove: A beachfront restaurant, Coconut Grove gives you waves, sand and beach loungers -- and tops it off with a French chef. You can dine on everything from fresh seafood (lobster thermidor is a specialty) to a burger and fries. (Siboney Beach Club at Dickenson Bay, about 15 minutes north of St. John's; 268-462-1538; open 7 a.m. to 11 p.m.; reservations highly recommended)

Order a Wadadli beer, a light brew made on the island, or a rum punch made with Antigua Cavalier Rum, also made locally. Too soon for happy hour? Sip a spicy ginger beer. Or try a lime squash, an island specialty made with sparkling water, fresh lime juice and sugar.

Best for Peace and Quiet: Arguably the most beautiful beach on the island, Valley Church Beach has white sand, sparkling clear water and just one beach bar. The shallow slope also makes it good for children. It's located south of Jolly Harbour, off Valley Road (look for a sign advertising the Nest), about 20 minutes from St. John's.

Best for Hanging with Locals: Pigeon Point Beach, near English Harbour, has showers, restrooms, a playground and a beach bar serving casual food. It's also not a bad spot for snorkeling. No wonder residents like to hang there.

Best for Active Sports: Jabberwock Beach is a great place for wind surfing and kite surfing; wind conditions always seem to be ideal, and lessons are available. Or just lie on the beautiful mile-long strip of white sand and watch the aerial acrobatics of those surfers.

Best for a Lively Scene: If you like your beaches complete with restaurants, bars, resorts and hair-braiders, Dickenson Bay is your spot. It's about 15 minutes north of St. John's.

Public Market Complex: In the morning, check out the goods at the junction of Market Street, Valley Road and All Saints Road, to the south (or right, if you've just gotten off a ship) of Heritage and Redcliffe Quays; take the right-hand fork at the striking monument of first Antiguan Prime Minister V.C. Bird. There's a separate fish market, then farther along you'll find a hall selling fresh produce. Farmers fill the bins by 5 a.m. with the bounty from Antigua and surrounding islands. Ask for one of Antigua's small "black" pineapples (they're actually dark green when ripe). Next to the fruit market is the small crafts market with beaded and shell jewelry, leather sandals and other goods. Unlike many markets, where crafts are just resold, artisans work there.

Historic Nelson's Dockyard: The only continuously working Georgian-era dockyard in the world is located in English Harbour, a natural "hurricane hole." Nelson's Dockyard was a major repair port for the British Royal Navy as far back as the early 18th century. Architectural remnants of the dockyard and its buildings rest side by side with impressive sailboats and yachts visiting from around the globe. The idyllic site is home to boutique hotels, restaurants, shops, galleries and a museum, all in tastefully repurposed historic structures. Placards describe how the buildings were originally used and provide a picture of life in the dockyard's heyday, when British naval legend Horatio Nelson was stationed there (it wasn't named after him until modern times, though). From St. John's, you have to cross the island to reach the dockyard; allow 30 minutes by taxi. You can negotiate with your driver to wait or grab another cab when you're ready to leave. The No. 17 bus also will get you there and back from downtown St. John's (see Getting Around).

The Dockyard Museum: Located in the naval officers' quarters, this is a fascinating collection of artifacts and memorabilia from throughout Antigua's history. You'll learn about the life of sailors, including the importance of their daily rum ration; the various dockyard jobs; sneaky ways women had of getting into the dockyard (they were banned, aside from the six wives allowed per 100 men); the fascinating life of Horatio Nelson; and the island's sugar economy. Don't miss the signboard with a list of rules, such as the one stating wives and families "are not to be allowed to straggle about the yard or to be on shore therein at improper hours." (268-460-1379; open 9 a.m. to 5 p.m.; admission included with Nelson's Dockyard ticket)

Shirley Heights: From Nelson's Dockyard, take a taxi up the hill to the ruins of the former lookout fort of the Royal Navy. You can have lunch while taking in the most spectacular vista in Antigua -- a panoramic view of English Harbour and Falmouth Harbour. Nearby, the Dow's Hill Interpretation Centre offers a multimedia show and a viewing platform to admire the vista. (268-481-5045; open 9 a.m. to 5 p.m.; admission included with Nelson's Dockyard ticket)

Betty's Hope: This partially restored 17th-century sugar plantation offers a glimpse at what a working plantation was like in colonial times. You'll see ongoing restoration and archeological digs. A visitor center, housed in a former storeroom, features a small museum of estate plans, pictures and maps. The site is best visited with a guide who can interpret the buildings and help explain how the site functioned -- including the history of the slaves who toiled there. (Pares Village road; 268-773-1630; open 10 a.m. to 4 p.m. Monday to Saturday)

Take a Hike: Stretch your legs and get some great views. A number of trails can be found around English Harbor, some of which lead you along beaches and up to Shirley Heights -- such as Carpenters Rock Trail.

Harmony Hall: For a taste of Italy in Antigua, head across the island (about a 45-minute drive) to this Italian-owned hotel, art gallery, bar and restaurant. Harmony Hall is partially housed in the buildings of an old sugar mill, and the gallery features local artists, as well as a selection of Italy's Deruta pottery. The restaurant spices up Italian fare with a Caribbean flair. Enjoy panoramic views, a small sandy beach and catch a boat to uninhabited Green Island for swimming and snorkeling. (Brown's Bay at Nonsuch Bay, near Freetown; 268-460-4120; lunch 12:30 p.m. to 3:30 p.m. daily; reservations strongly recommended)

Barbuda: Hop onboard a catamaran for a day trip to Antigua's sister island. Barbuda is 28 miles from Antigua, and it's about a 90-minute trip each way (though rough seas can extend the journey). Barbuda is famous for its unspoiled beaches and frigate bird sanctuary. Ferries only make the roundtrip once per day (with no sailings on Mondays or Wednesdays), so be sure the schedule is a fit with your ship's all-aboard time.