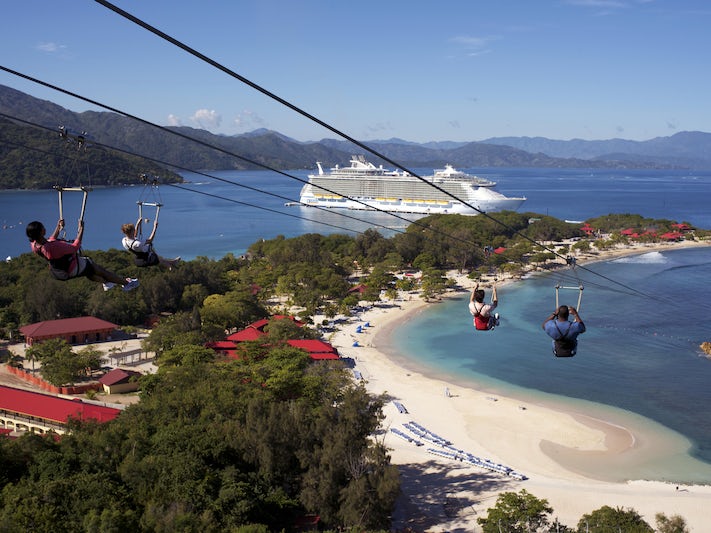 Find Things to Do in Labadee on Viator

Popular Things to Do in Labadee

The focus is on watersports, and Labadee offers the requisite snorkeling, jetskiing, parasailing, kayaking, powerboating and banana boating. You can also rent floating beach mats. Fees vary for rental equipment and activities. A pair of beach volleyball courts are situated on the eastern end of the peninsula.

Labadee's Arawak AquaPark (fee applies) is a roped-in circle of sea featuring climbable ice bergs, sea-saws, trampolines and slides. The park is monitored by life guards, but children under four feet tall must be accompanied by an adult. Also for the kids: Royal Caribbean's youth program, Adventure Ocean, has an enclosed pen feature water-spiriting contraptions, jungle gyms and the like. Organized, supervised activities are offered during visits.

According to Royal Caribbean, the Dragon's Breath Flight Line is the world's longest zip-cable over water. But despite the claim that you'll reach speeds of 40 to 50 miles per hour, adrenaline junkies will need to content themselves with the seagull's-eye view and sensation of floating. Enjoyments enough for most, but the real problem is the expense; it's $89 for a ride that lasts less than 90 seconds. The Dragon Coaster, an alpine slide that cuts twists and turns through the dense island foliage, is another option.

A lovely oceanview spa is set up on a hillside overlooking the beaches. The venue offers a handful of treatments at Royal Caribbean's typically inflated prices.

Passengers looking for a little culture can embark on a Haitain cultural tour.

Five "island-style" bars are scattered across Labadee. The venues sell the standard list of frozen cocktails, mixed drinks and beer. Roving bartenders diligently fill in the gaps, darting from beach lounger to beach lounger to drop off coronas and daiquiris.

A licensed group of Haitian merchants hawk their wares -- wood carvings, necklaces, paintings, T-shirts --in the outdoor "Artisan's Village." The winding stretch of stalls is a bit of a gauntlet, so expect to hear "Where you from? Sir, let me show you something," ad nauseum. The Artisan's Village is not to be confused with the "Artisan's Market," a mostly hard-sell-free indoor space displaying beaded necklaces, wood carvings, local rum and cigars. There are also the obligatory Royal Caribbean shops selling T-shirts, sun block and other beach-day paraphernalia.