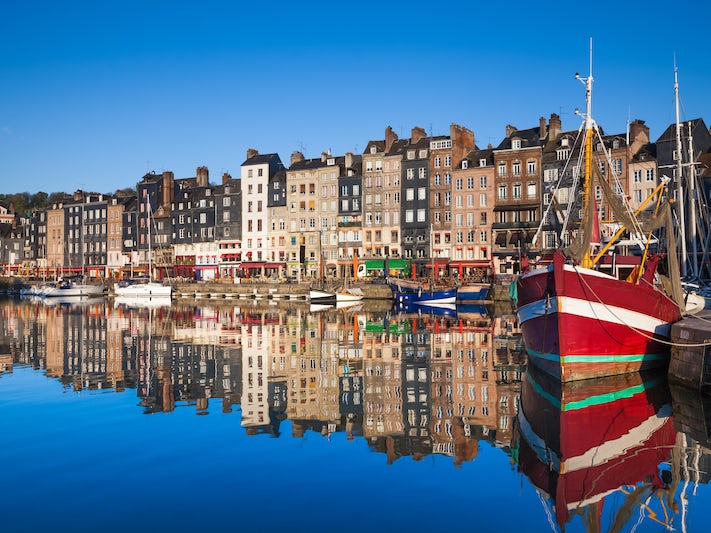 Find Things to Do in Honfleur on Viator

Popular Things to Do in Honfleur

Food and Drink in Honfleur

If you are fond of oysters -- or huitres, as this local specialty is called -- you will find food bliss in Honfleur. The region is also known for its cheeses -- camembert, livarot and neufchatel, among them. Many of the restaurants offer fixed-priced multicourse lunches at two and three different price points. They tend to be quite filling. It's worth considering an entree (French for a starter) and, say, a cheese plate or dessert instead. As for tipping, restaurants and cafes normally include a 10 to 15 percent service charge on the bill for meals and beverages. The phrase "service compris" means tip is included; "service non compris" means it is not. A small additional tip of roughly 3 percent is welcome if you believe it is well-deserved.

There are a lot of good cafes and restaurants at the harbor. Au Vieux Honfleur, while more formal than most, is just terrific. Located at 13, quai Saint-Etienne, next door to Musee de la Marine, the cuisine is standout with its fresh seafood and local produce and ingredients. The menu, in both French and English, is voluminous. Starters include foie gras with carmelized apple, homemade fish soup with garlic croutons, pan-fried frog's legs and cooked oysters with a leek fondue and Champagne sauce. Lunch service starts at noon. There is dining indoors and out.

A locals' favorite, L'Homme de Bois (30-32, rue de L'Homme de Bois near Sainte-Catherine's) is a quaint and typically Norman restaurant, offering traditional French food. Starters, which change daily, include mussels with garlic, fish soup with cream, and salmon tartar. Signature dishes are the seafood platter, lamb shank and rib roast. It's an intimate place with wooden beams and mustard-colored walls, and just a few tables outside. There is no menu in English, and it's on purpose. This is, after all, an authentic French restaurant. However, the waiter will gladly translate. Lunch hours are from noon to 2 p.m.

For an elegant dining experience, little beats the dining room or outdoor terraces of La Ferme Saint Simeon, the five-star hotel (now, not then) at which Boudin, Corot, Monet and others gathered to paint. Monet's studio is still there. The dining area overlooks gardens and the estuary, making it easy to see why it inspired so many painters. Lunch, from 12:30 p.m. to 2 p.m., varies depending on what the chef finds at market. The fixed menu, at three different (pricey) prices, features a starter, a main dish and a dessert. The hotel on rue Adolphe Marais is a 20-minute uphill walk from the harbor.

The oldest part of Honfleur is centered on Vieux Bassin, the harbor. With its sidewalk cafes, old shipbuilders' houses and colorful carousel, it's pure eye candy. Rue des Petites Boucheries, in the center of Old Town, was once lined with butcher stalls. Only one stall remains today. Rue de La Ville, another street worth exploring, houses two robust stone buildings constructed to store salt needed as a preservative by local sailors for cod fishing in faraway Newfoundland. Most of the stones used in the construction of the 17th-century warehouses came from a fort that protected Honfleur in the 1500's. The warehouses are now used for meetings, concerts and art exhibitions. Stroll along the harbor itself, and you will appreciate it for the fishing port it still is. In season, the daily catch -- shrimp, scallops, oysters, sole, mackerel, cod, turbot, monkfish and sea bass, among others -- is sold on the landing. There's also a fish market on Saturday mornings.

For such a small town, Honfleur has a surprising number of museums that will deepen your introduction to the region. Housed in a 14th-century church at the old harbor, Musee de la Marine traces the history of the port through ship models, paintings, weapons and naval instruments. Next door, the Musee d'Ethnographie has nine rooms in 16th- and 17th-century houses crammed with costumes, furniture, folk art and domestic objects that tell the story of early Honfleur. There's also a small prison. A discount ticket buys entrance to both museums (open from 10 a.m. to noon and 2 p.m. to 6:30 p.m., Tuesday through Sunday). The Musee Eugene Boudin, at Place Erik Satie just above Sainte-Catherine's Church, is named after Honfleur's best-known painter. Boudin, one of Monet's early influences, is represented along with many other great Impressionists who were drawn to Honfleur by the quality of light in the estuary. The museum also has a large collection of Normandy head-dresses, costumes and furniture. (From mid-March through September, it's open daily, except Tuesdays, from 10 a.m. to noon and from 2 to 6 p.m., but hours do vary by season.)

Sainte-Catherine's Church, dating from the 15th century, was constructed by shipbuilders with modest resources. Construction was based on shipbuilding techniques, and it shows. The vaulted roof looks much like the hull of a ship. The church, except for the stone foundations, is entirely built of timber from the nearby Touques forest. The largest wooden church in France, it is also known for its twin naves. Several markets take place at Place Sainte Catherine outside the church: a traditional outdoor market on Saturday mornings, a market featuring organic agricultural products on Wednesdays from 8:30 a.m. to 1 p.m. and a flea market on the first Sunday of each month.

For a different perspective, Jolie France sails outside the harbor with guided cruises of the estuary, nearby villages and, best yet, the striking Normandy bridge. Built in 1995, the bridge links Honfleur to the ocean port of Le Havre. At one time, it held the record as the world's longest cable-stayed bridge. The boat departs June through October at 11:30 a.m., 2:30 p.m. and 4:30 p.m. The 90-minute tour has commentaries in French and English.

Erik Satie may not be a household name today, but this eccentric early 20th-century composer was a native son who worked with some of the greatest artists and composers of his time: Picasso, Braque, Debussy, Ravel and Stravinsky. In Maisons Satie, an offbeat museum located in Satie's birthplace, visitors are guided room to room to the sound of his music with commentary about the man, the music and his times. The museum, at 67, boulevard Charles V, is open every day but Tuesday between May 1 and September 30, from 10 a.m. to 7 p.m., and October 1 to April 30, from 11 a.m. to 6 p.m. The tour takes one hour. Headphones in English are available.