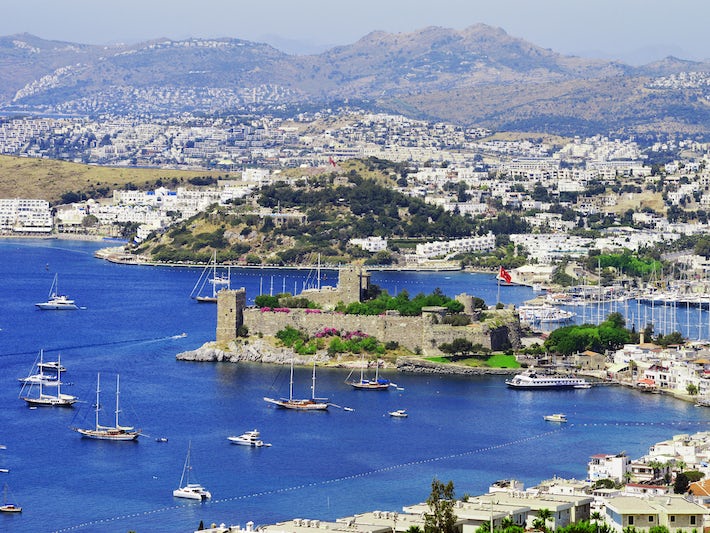 Find Things to Do in Bodrum on Viator

Popular Things to Do in Bodrum

Food and Drink in Bodrum

The marina, where most cruisers spend the day, is lined with al fresco cafes, typically overpriced restaurants serving a mishmash of regional Turkish food (salted fish, stuffed vine leaves, grilled meats), seafood, burgers, Mexican, Asian, Italian, pizza and casual Turkish options (kebabs!). Wash it all down with raki, a Turkish liqueur produced from anise. The marina restaurant scene is mostly an international mix of mediocrity. But, you're paying for the buzz, the people-watching opportunities and the lovely views of bobbing motor-yachts. As a general rule, tips of 10 percent are customary. That said, there are certainly a number of standout spots in town.

One of the marina's most well-known casual venues is Sunger Pizza, which blends a prime location (a rooftop terrace with a nice view of the passing hoi polloi and the castle) with some of the best pizza in the area and reasonable prices. In addition to pizza, Sunger's menu has salads, kebobs and other casual fare. The joint is popular with tourists and locals, so you may have to wait for a table during the busy lunchtime rush. (Neyzen Tevfik Cad. 218)

It's certainly pricey, but some would argue that the views alone from the Kafedaki Restaurant & Cafe are worth the cost of dining there. Set up on a hillside, you overlook Bodrum, the adjacent bay of Gumbet and Bodrum's Greek Isle neighbor, Kos. Staple menu items include grilled octopus, chickpea ravioli, lamb's tongue, spinach and rocket salad, and various meats and seafood mains. The owners of the restaurant will even arrange to have you picked up from a hotel in Bodrum. (Call +90 252 317 02 75 for directions.)

One of Bodrum's marquee experiences is taking a gullet cruise along the Turkish coast. The gullet is a traditional Turkish sailing yacht constructed out of lacquered pinewood. Glide in and out of isolated Aegean coves through the clear, salty water (some passengers come prepared with masks and snorkels so they can peer below unflinchingly), and swim or sunbathe right off the yacht. All cruise lines will offer the trip as an excursion, but it's just as easy to create a custom "Blue Voyage," with or without lunch, by negotiating for your own boat and captain. The gullets are all lined up along the marina, and haggling is half the fun.

Towering over the harbor to the west and the bay to the east is Bodrum's postcard image, the restored Castle of St. Peter. The Knights Hospitaller began construction of the castle in 1402, drawing from the marble ruins of the nearby tomb of King Mausolos. (Look for the polished rock in the castle's walls.) Today, the castle is Bodrum's top tourist destination, and it's easy to lose track of time within its environs -- while climbing the towers, descending into the dungeons and wandering the gardens. The castle houses the Bodrum Museum of Underwater Archaeology, which showcases numerous artifacts, including jewelry, coins and amphorae (ceramic transport jugs) recovered from nearby ship wrecks that date back to the late Bronze Age (14th century B.C.). One particularly impressive room houses ancient glasswork. The room is pitch black, save for the glowing artifacts, which are illuminated from below.

Editor's Note: The castle is open every day, except Mondays. (Cruise lines may have special access, so shore excursions may still be available.)

The Tomb of King Mausolos was built in the late 300's B.C., commissioned by the king's wife/sister (not such a common combination these days), Artemisia. Though now in ruins, the once-massive structure is considered one of the seven wonders of the ancient world. It's about a 20-minute walk from the center of town, and because little of the structure remains -- the foundation is still there, along with marble pieces scattered about -- it'll be up to the guide or visitor to bring it to life. There's also a small museum on the grounds. (Turgut Reis Cd and Saray Sk)

History buffs won't want to miss the Bodrum Amphitheatre, which is set up on a hillside overlooking the harbor. The structure was built in the late 300's B.C. under the direction of King Mausolos and was expanded by the Romans hundreds of years later. The 10,000-plus-seat theater was excavated and restored in the 1970's, after sitting idle for some 2,000 years. Besides being a tourist site, the amphitheatre still operates as an open-air museum for concerts and other shows during the high season. (Bodrum Turgutreis Yolu)

While the city of Bodrum isn't known for its beaches -- there's really just one ho-hum option in town -- the peninsula certainly has plenty of lovely stretches. Bitez Beach, located about five miles west of Bodrum, is a full-service sunbed and umbrella option, where you can rent water sports equipment, shop for crafts or munch at a seaside cafe. For those looking for something a little more active, the steady breezes make the Aegean a prime spot for windsurfing, and the activity is available at Bitez and elsewhere on the peninsula.

Depending on your tastes, shopping may rate as a "don't miss" activity in Bodrum. The marina is lined with boutiques, the area around the castle boasts souvenir shops, and various bazaars have all manner of carpets, ceramics and leather goods, in addition to "genuine fake" designer jeans and watches. On Tuesdays, a big indoor market is held at the bus station with plenty of sellers hawking knick-knacks and bric-a-brac. As previously noted, Bodrum is also known for its handmade leather sandals, and Ali Guven is recognized as the top talent. His shop is located at Carsi Ici, Ziraat Bankasi karsi. Bring cash.