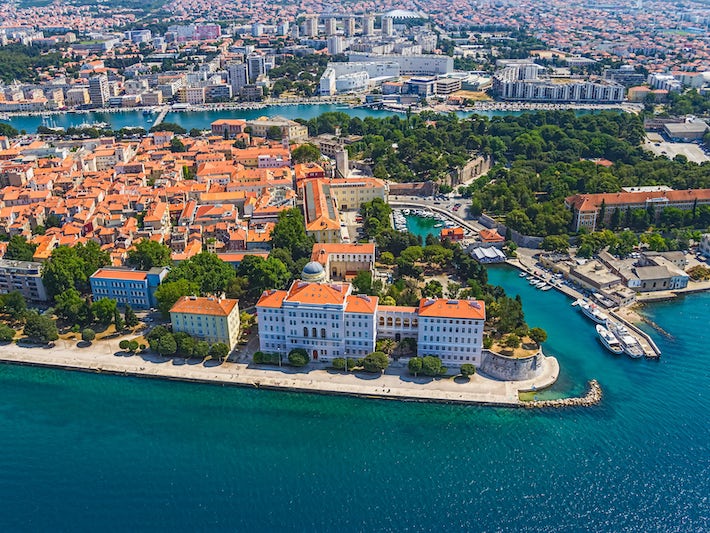 Find Things to Do in Zadar on Viator

Popular Things to Do in Zadar

Food and Drink in Zadar

As Old Town is a busy center of locals, students and travelers, you'll find the usual range of cafes, pizza and pasta places, as well as restaurants featuring seafood from the Dalmatian Coast -- calamari, octopus, crab and scampi. Zadar has several konobas, traditional tavernas that feature an open-hearth fireplace and a storage cellar for wine and olive oil. They're considered to be the best places to experience typical Dalmatian cuisine. Once, they were places where fishermen hung out and got someone else to cook their catch for them.

For a cool treat, sweet shop (slasticarnica) Donat, located near the Saint Stosija Cathedral, has excellent gelato. Looking for more of a bar-type setting? The newly redone Queen Jelena Madijevka Park is home to Ledena, where you can enjoy great views of Fosa Marina.

Konoba Stomorica offers traditional seafood dishes, with tables indoors and out. It's the type of place where locals actually break out in song from time to time -- though I didn't get to experience a performance on my visit. (Stomorica 12; open 11 a.m. to midnight)

Konoba Skoblar is located next to the small Square of the Five Wells (Trg pet Bunara, which once provided Zadar with water) in the oldest part of the Old City. It has a stone interior and serves fish and meat dishes cooked under an iron bell. It also has a nice selection of Croatian and foreign wines. There's live music most weekends. (Trg Petra Zoranica; open 7 a.m. to midnight)

Down the same street from Konoba Stomorica, Trattoria Canzona is a great bet for pizzas and pastas at reasonable prices. (Stomorice 8; Open daily, 10 a.m. to 11:30 p.m. and Sundays, noon to 11 p.m.).

For a gourmet lunch, try the favorite local seafood restaurant, Riblji Restaurant Fosa, near the Land Gate. The restaurant is named after the harbor that flows next to the city's east wall, which is just outside its front door. Eat on the terrace for great views. Reservations are recommended. (tel: 023 314-421; Kralja Dmitra Zvonimira 2; open noon to 11:30 p.m.)

In reality, the Greeting to the Sun falls more into the "Can't Miss" category. Located right next to the Sea Organ, this manmade, 300-glass-plate circle, flush with the ground, is the first thing visitors to Zadar will see when they come ashore. The solar modules inside work with light in the same way the Sea Organ works with sound.

Old Town: From the Roman Forum and the compact pedestrian zone in the middle to the city walls, Zadar is surrounded on three sides by stone walls, begun by the Venetians in the 16th century. The oldest part of the walls is on the eastern side of town, where a footbridge connects the Old Town with the newer parts. Opposite the footbridge are four medieval gates. The Land Gate, to the south, has a Venetian lion and various coats of arms. The center of the Old Town, near the tourism office, is the major meeting spot, with outdoor cafes and shops. You can explore the entire Old Town by foot in about an hour.

Historic Churches: No more than 10 minutes from the cruise dock is Saint Donat, a round, pre-Romanesque church from the 9th century that's a symbol of Zadar. It's largely empty inside. On the northwestern side is the Pillar of Shame, where evildoers were chained and humiliated in the Middle Ages. Opposite Saint Donat is a Benedictine monastery that holds the Museum of Church Art, including paintings and sculpture. Nearby are Saint Anastasia's Cathedral (Katedrala Sv. Stosije), dating from the 12th century and housing the relics of St. Anastasia in a marble sarcophagus on the altar in the left apse. The Church of Saint Simeon (Crkva Sv. Sime) is also close, dating from the 16th century and housing the sarcophagus of St. Simeon, a tomb commissioned in 1377 and built by a local goldsmith. The coffin is covered inside and out with pure silver.

Roman Forum: In front of Saint Donat are the remains of the Roman Forum, begun in the 1st century B.C. Plunked in the middle of the ruins is Caffe Bar Forum. Order a pastry, a coffee (no credit cards), talk with your friends, or pick up your cell phone to make a call; you won't be alone. The cafe scene is like a modern-day forum.

Morske Orgulje (Sea Organ): The Sea Organ is on the northwestern corner of the sea promenade, near the dock for cruise ships. Designed by architect Nikola Basic and opened in April 2005, the Sea Organ captures the movement of waves and transforms it into music. Basic's project won the European Prize for Urban Public Space in 2006. The sound is created by 35 polyethylene pipes of different lengths and sizes, embedded with labiums (whistles) that play seven chords of five tones as the sea pushes air through them. The pipes are built into perforated stone stairs that stretch about 210 feet along white marble steps. It's a great place for sitting and thinking, as well as for watching sunsets.

The Tower of Saint Stosija cathedral is open until midnight during the summer so visitors can enjoy sweeping nighttime views of the city below.

Pag Island: Pag is dry and relatively barren but has some good beaches and pungent cheese (Paski Sir). Wide, shallow coves are tucked along the Pag coast, and dive centers organize excursions to Premuda Island. Pag Town celebrates traditional local festivals, so it's worth seeing what is happening the day you are in the port of Zadar -- Pag Town is a 30-minute drive across a causeway. You can rent a car or take a bus from the mainland; check with the tourist office in the Old Town. You can find the tourist Information office in Pag Town at Ulica Od Spitala 2 (tel: 023 611 301;)