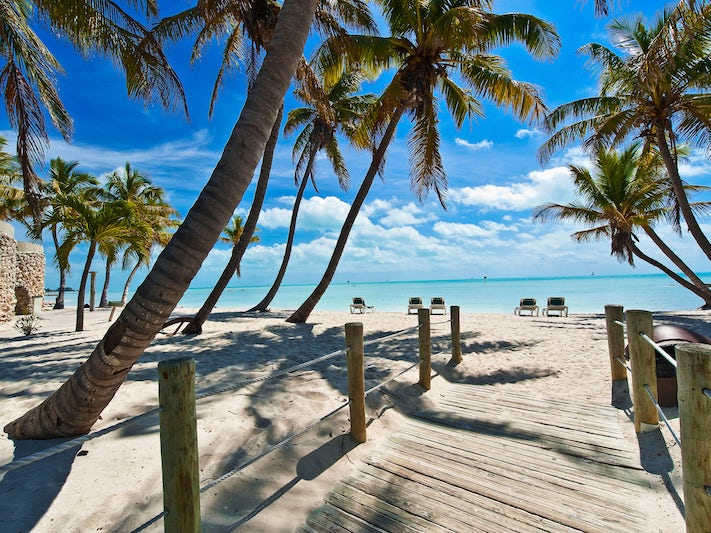 Popular Things to Do in Key West

Key West might technically be a part of Florida, but it has a distinctly Caribbean vibe. It's the southernmost city in the U.S., one of the most eclectic ports in the Western Caribbean and the United States. Also known as the Conch Republic, Key West actually moved to secede from the U.S. back in the 1980s. Today, it is home to an adorable and mostly residential "Old Town," filled with cottages reminiscent of gingerbread houses and perfect for Instagram-worthy photo ops. The artsy city is widely walkable, though biking and hopping on a scooter are also viable excursion options for exploring its galleries, coffee shops, restaurants and museums. First-timers shouldn't miss booking a shore excursion aboard the local conch tour train. Hemingway fans will want to hop on an excursion to the Hemingway House for a guided tour (or join a bar crawl to drink where Hemingway once did).

Key West is hot and the sun is strong all year long, so visitors should always be prepared with sunscreen and water. Hurricane season stretches from the summer through the fall. As an American city, English is spoken in Key West and the currency is the U.S. dollar.

Find Things to Do in Key West on Viator

Food and Drink in Key West

For an elegant yet casual culinary experience with a fabulous atmosphere that feels miles away from the craziness of Duval Street, Louie's Backyard is a longtime locals' favorite. Sit on the outdoor deck, right on the Atlantic and shaded by lush sea hibiscus trees. It's the only restaurant in Key West where you can hear the sound of the waves breaking on the beach. (700 Waddell Avenue; 305-294-1061; open 11:30 a.m. to 10:30 p.m. daily)

For ultracasual fare in an ultra-funky setting, B.O.'s Fish Wagon is named after owner Buddy Owen, who started out selling his famous fish sandwiches from a wagon. The eatery supplies Key Westers with freshly fried fish sandwiches, including grouper, and a signature Key Lime mayonnaise. (William and Caroline streets; 305-294-9272; open 11 a.m. to 9 p.m. daily)

A & B Lobster House has been around for more than 50 years, serving up platters of the freshest Florida spiny lobster. They also have a cushy upstairs cigar bar, Berlin's. (700 Front Street; 305-294-5880; open 11 a.m. to 11 p.m. daily, reservations highly recommended)

Mangoes, with its prime Duval Street location, is one of Key West's best restaurant for people watching -- as well as enjoying the Florida-Caribbean infused salads and entrees. Its front courtyard offers great tables. (700 Duval Street; 305-292-4606; open noon to 11 p.m. daily)

Pepe's Cafe and Steakhouse opened in 1909 and has been going strong ever since. Great burgers, omelets and excellent barbecued chicken fill the menu. Oysters are a specialty, as is the outside covered patio. Homemade desserts are a must. (806 Caroline Street; 305-294-7192; open 7:30 a.m. to 10 p.m. daily)

Santiago's Bodega is an out-of-the-way locals' favorite in historic Bahama Village, but then again, nothing is too far in tiny Key West. Tapas, salads and sangria have made this small dining spot famous. Seating is limited, so advance reservations are recommended. (207 Petronia Street; 305-296-7691; open 11 a.m. to 10 p.m. daily)

Sip a rum runner, the drink of the Keys, at Sloppy Joe's, Ernest Hemingway's favorite bar. For a mojito, which smoothly mixes rum and mint, head to the Cuban restaurant El Meson de Pepe.

Best for Quiet Time: Rest Beach near the White Street Pier, at about 300 feet long, is a locals' favorite. So is the pedestrian and bicycle-only fishing pier, where glorious sunset-viewing and people-watching are free gifts of the island. Amenities are few, but restrooms are just down the road at Higgs Beach.

Best Gay-Friendly Beach: Higgs Beach at the end of Reynolds Street offers chairs and snorkel equipment rentals, tennis courts, volleyball courts, kids playgrounds on both sides of the road, a beachside restaurant, outdoor showers and a spacious dog park -- with separate space for little dogs -- across from the beach.

Best for Snorkeling: Fort Zachary Taylor State Park's beach at the end of Southard Street requires a daily entrance fee. The beach offers sparkling blue and green waters, a snack bar, snorkel and chair rentals, shady picnic areas with grills and tables, and the best public restrooms and showers on the island. There is also the historic fort and a Civil War Museum.

One of Key West's treasures and one of the easiest stops to make is the Ernest Hemingway Home and Museum. Walk through the Spanish-styled home built in 1851 and out to the swimming pool (the first one in Key West). The preserved estate features about 40 extremely well-cared for, free-roaming cats, descendants of the six-toed felines that lazed on Hemingway's lap while he wrote. Tour guides know each cat by name. (907 Whitehead Street; 305-294-1136; open 9 a.m. to 5 p.m. daily)

Across the street from Hemingway's old digs and 88 steps up a circular iron stairway is the top of the Lighthouse and Keeper's Quarters Museum, offering spectacular views of the island. Opened in 1848, the lighthouse became known for having a woman as its first keeper -- unheard of in the 19th century. The U.S. Coast Guard decommissioned it in 1969. (938 Whitehead Street; 305-294-0012; open daily 9:30 a.m. to 4:30 p.m.)

Named for the painter and bird expert James Audubon, the Audubon House and Tropical Gardens is a nonprofit opened in 1960 by a Key West native. The gardens are lovely, and in addition to tours, a gift shop and gallery offer a host of Audubon prints. (205 Whitehead Street; 305-294-2116; open daily 9:30 a.m. to 5 p.m.)

Stroll the two-mile Harbor Walk, which runs from Front to Grinnell streets at the city-owned historic seaport. Shops and restaurants line the harbor, which is home to schooners, catamarans and other sightseeing vessels.

The Harry S. Truman Little White House was originally built as officers' quarters for those stationed at the local Navy Station. In 1946, President Truman made it a winter respite for working vacations, as did Presidents Eisenhower and Kennedy in later years. Today, it's a living history museum and meeting place for government leaders. (111 Front Street; 305-294-9911; open daily 9 a.m. to 4:30 p.m.)

If you are serious about sightseeing, you can purchase a Key West Island Passport. It includes the Conch Train or Old Town Trolley, the aquarium, the Hemingway Home and Museum, the Shipwreck Treasure Museum, the Little White House as well as some shopping discounts.

Culinary aficionados really shouldn't miss a tasting experience at Peppers of Key West. Hop on a stool at the tasting bar and check out a wide range of sauces. Quirky owners Tom and Mike recommend your tasting be accompanied by mouth-cooling beer, which can be purchased at several bars a few steps away. (602 Greene Street)

History lovers will enjoy the Key West Cemetery for offbeat headstone inscriptions such as "I Told You I Was Sick" and "At Least I Know Where He's Sleeping Tonight." You can browse on your own with the provided self-guided tour maps. (701 Passover Lane; 305-292-8177; open dusk to dawn daily)

If you don't want to dive, check out the waters while sailing along on a huge glass-bottomed catamaran. The reef that surrounds the city is the only living coral reef in North America and is chock-full of exotic fish, including spiny lobsters and snapper. The Fury Catamaran Glass Bottom Boat cruises at noon, 2 p.m. and 4 p.m., with sunset cruises at 4:30 p.m. (Departs at the end of Duval Street, between Ocean Key Resort and Pier House Resort; 877-994-8898)

One of Key West's most treasured historic landmarks, the San Carlos Institute was founded in 1871 by Cuban exiles as a center for education and civic pride. Today, it's a museum, library, art gallery, theater and a site for community college classes. (516 Duval Street; 305-294-3887)