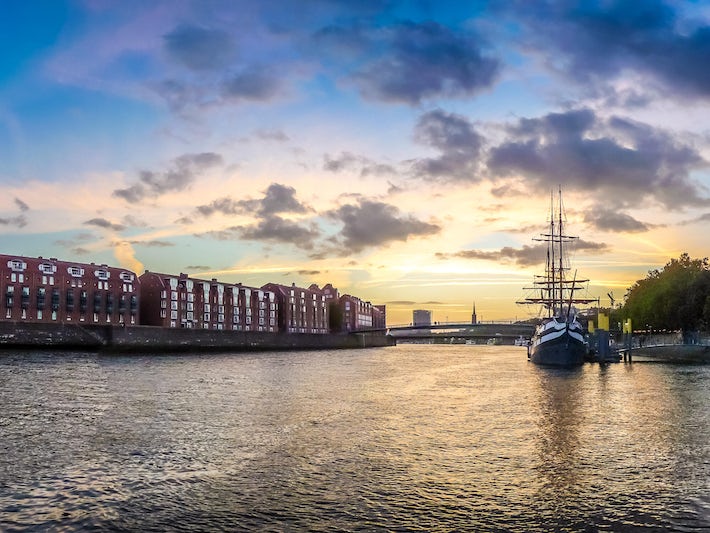 Find Things to Do in Bremerhaven on Viator

Popular Things to Do in Bremerhaven

Food and Drink in Bremerhaven

Northern Germany's great Hanseatic cities -- Bremen, Hamburg and Lubeck -- have a distinctive cuisine all their own. Look out for Braunkohl und Pinkel (cabbage and sausage). It's one of Bremen's best-known dishes -- also sometimes called Grunkohl und Pinkel, when kale is used instead of cabbage.

Other goodies include Pinkelwurst (a smoked sausage made with pork, oats, barley, suet, onions and other spices) and Bremer Labskaus, which originated as a dish for sailors serving onboard 18th-century sailing ships. Originally made with salt beef (Pokelfleisch), which kept well on long sea voyages, modern variations may use corned beef and even include herrings.

Here are some good eats in Bremerhaven.

Seute Deern is a turn-of-the-20th-century tall sailing ship on permanent exhibit at Bremerhaven's Maritime Museum. Its forward cabin is now a good quality restaurant, serving fresh seafood in an atmospheric setting. Salmon, eel, crab and herring fillets are on the menu, and catfish is a particular speciality. (Van-Ronzelen-Str. Tel. 0471 41 62. Open for lunch from 11 a.m. to 3 p.m.)

The German Emigration Museum's restaurant, Speisesaal, is a big hit with visiting Americans as the chef, Sven Krause, is a huge fan of U.S.-style steakhouses and recreates their style with his "steak and fish" menu. (Columbusstrasse 65. Open for lunch, noon to 3:30 p.m.)

You can't miss the Strom restaurant at the eye-catching Atlantic Hotel Sail City; it's just off Columbustrasse, right on the Weser waterfront, and looks a little like Dubai's iconic Burq al Arab Hotel. It's a good place for lunch, serving up international dishes and panoramic sea views. Try the goulash soup, fillets of plaice with sauteed potatoes and salad, or traditional German roast pork with Sauerkraut (pickled cabbage). (H-H Meierstrasse at Columbustrasse. Open for lunch from noon to 5:30 p.m.)

Bremerhaven's 100-year-old fishing harbor area has developed into something of a tourist haven, with restaurants and cafes, cozy waterfront pubs and nautical-themed shops (good for finding the aforementioned ship models). It's a great place for a stroll or a stop.

The Deutsches Auswandererhaus (German Emigration Center), right on the harbor, opened in 2005 and was voted European Museum of the year in 2007. It tells the moving stories of some seven million German, Eastern European and Jewish emigrants, who sailed from Bremerhaven for the New World of America between 1830 and the mid-1970's. Exhibits include reconstructions of steerage accommodations aboard sailing and steam ships, and of the Registration Hall at New York's Ellis Island. Visitors can follow the story of one of 18 migrants, and American visitors can even start tracking their European ancestors there. A play area is available for children. (Columbusstrasse 65. Open Sunday through Friday, 10 a.m. to 6 p.m. and until 7 p.m. on Saturdays.)

Bremerhaven's Zoo am Meer Bremerhaven (waterfront zoo), also at the harbor, is home to polar bears, seals, Arctic foxes and other terrestrial and marine wildlife of the Far North. You'll find monkeys there, too, since Bremerhaven's seafarers brought them back from their travels. It's great fun for kids, who can pit their skills against the animals on parallel adventure trails or watch seals being trained and animals being fed. (H.-H.-Meier-Strasse 7. Open daily, 9 a.m. to 7 p.m., April through September.)

Bremerhaven's most famous landmark is its old lighthouse. Built in 1853, it's the oldest mainland lighthouse on the North Sea coast that's still in service. Look at the sea from Columbusstrasse, and you can't miss it. While you can't tour the lighthouse, it does make for a great photo opportunity.

If you have time, take the train (or a tour) to Bremen to see the museums, 11th-century cathedral, Hanseatic architecture and medieval old quarter. Here are some Bremen highlights.

The Uberseemuseum (Overseas Museum) celebrates Bremen's maritime connections and takes visitors on a virtual tour of the globe, taking into account evolution and the ecosystem. (Bahnhofsplatz 13. Open Tuesday through Friday, 9 a.m. to 6 p.m., Saturday and Sunday, 10 a.m. to 6 p.m., closed Mondays.)

The Universum Science Museum has 250 hands-on, interactive displays that explore the human body, the earth and the cosmos. It's a 15-minute ride aboard Tram 6 from the Bremen railway station. (Wiener Strasse 1a. Open weekdays, 9 a.m. to 6 p.m. and weekends from 10 a.m. to 7 p.m.)

St. Petri Dom Cathedral, Bremen's oldest church, was built in 1041. It lies at the heart of downtown Bremen, near the banks of the River Weser and adjacent to the spectacular medieval buildings of the old Marktplatz. It's also within easy strolling distance of The Schnoor, Bremen's small but very picturesque old quarter, a warren of narrow streets lined with houses that date from the 15th to the early 20th centuries. (Open Monday through Friday, 10 a.m. to 5 p.m., Saturdays from 10 a.m. to 2 p.m., Sundays from 2 to 5 p.m.)