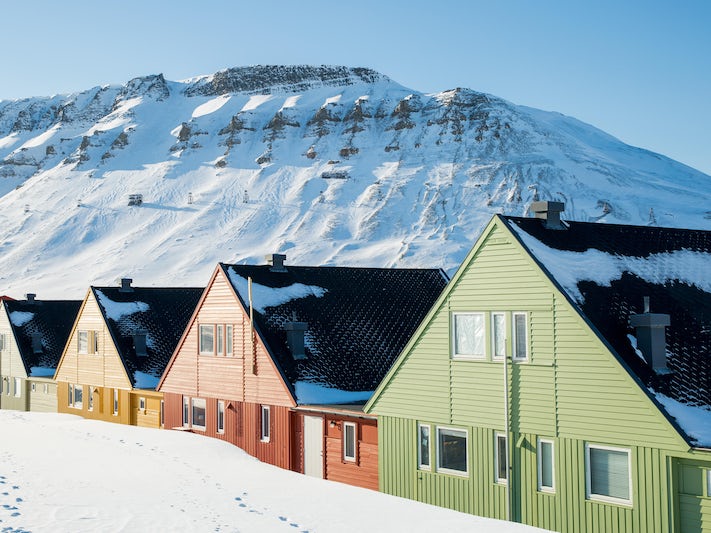 Find Things to Do in Spitsbergen (Svalbard) on Viator

Popular Things to Do in Spitsbergen (Svalbard)

Food and Drink in Spitsbergen (Svalbard)

Food in Svalbard is expensive, and the best restaurants are in the main hotels. If you want to save money, try some of the smaller restaurants that do not cater exclusively to tourists; they may be a better value or at least a bit cheaper. The food served here appeals to the international clientele that visits the town, with a slant toward Norwegian cuisine, including fish, marinated seafood and meat. Specialties include reindeer and seal, and vegetarian meals are not easy to find. Fresh berries are a summertime treat.

Restaurant Nansen is the Radisson BLU Polar Hotel's restaurant, and its well-regarded a la carte menu offers such local entrees as reindeer, seal and whale steaks, and Arctic char (a fish). The room seats about 100 and has views out to the Isfjord and a backdrop of mountains through floor-to-ceiling windows. (Vei 500; 47 79 02 34 57; open 7 a.m. to 10 a.m. for breakfast and noon to 10:30 p.m. for lunch and dinner)

Funktionaermessen: The Spitsbergen Hotel has its own French-flavored restaurant called the Funktionaermessen, which boasts a decent wine list and a very good reputation. Opened in 2000, the 100-seat dining room looks over the town and the Isfjord. The bar serves great club sandwiches. It's only open for dinner (6 to 11 p.m.), making it a good option for passengers who are staying a night pre- or post-cruise. (Postboks 500; 47 79 02 62 00)

Svalbard Museum: This modern museum, opened in its present location in April 2006, offers an introductory window into Svalbard history and present-day conditions, as well as its tundra, fauna and wildlife. Separate sections focus on early exploration of Svalbard and the North Pole, the whaling industry, the hunting and trapping eras and mining (which is still extant at the Russian settlement of Barentsburg). Exhibits include photographs, drawings, maps and artifacts. The museum shop sells attractive souvenirs with Svalbard themes, plus jewelry, fossils, books, drawings, maps, photographs and postcards. It's open daily from 10 a.m. to 5 p.m. It's located at the Svalbard Science Center, just steps from the Radisson BLU Polar Hotel Spitsbergen. (Postboks 521; 47 79 02 64 92)

North Pole Expedition Museum: This museum, formerly known as the Spitsbergen Airship Museum, is now located just behind the university near the fjord. Here you'll find exhibits related to the airships that set out from Svalbard to reach the North Pole in the early years of the 20th century: the America in 1907/1909, Norge in 1926 and Italia in 1928. The museum, which opened in 2008, exhibits photographs, drawings, maps, books, articles about the era and a sizable set of stamps that feature airships and their exploits. Most interesting are models of airships, planes and ships. The museum also screens films, such as documentaries on airships, on demand. Opening hours are 10 a.m. to 4 p.m., but the museum offers extended hours when a cruise ship is in. (Postboks 644; 47 91 38 34 67)

Svalbard Kirke: The slim wooden church tower with a red base rising from a sharply peaked roof is visible on a slope above town from just about anywhere in Longyearbyen. The church was built in 1958, replacing one destroyed during World War II. Visitors are welcome to enter at any time and are offered free coffee and tea (and complimentary Wi-Fi) in the church's lounge. Services are held on Sundays at 11 a.m. and Tuesday evenings at 7 p.m. (Postboks 533; 47 79 02 55 60)

Galleri Svalbard: This small gallery is a bit of a walk from the center of town, but it's worth it if you're interested in local photography, art and crafts. There's also an interesting collection of historical Svalbard maps. It's open daily from 11 a.m. to 5 p.m. The gallery is located at the southern end of town near the Coal Miners' Bar & Grill and Guesthouse 102. (Postboks 350; 47 79 02 23 40)

Local Life: As many expedition-style cruises depart from Longyearbyen and then return, some visitors will have both pre- and post-cruise stays there. Once the museums have been seen, it's nice to walk up the main street to get a glimpse of local life at buildings like the post office, bank, shops, schools, sports center, playgrounds and the rows of colorfully painted houses in shades of red, mustard, light and dark green, blue and tan. When mining ceased, the town found a new lease on life with tourism. That brought many families to the area for the first time, providing an incentive to improve services for the local population.