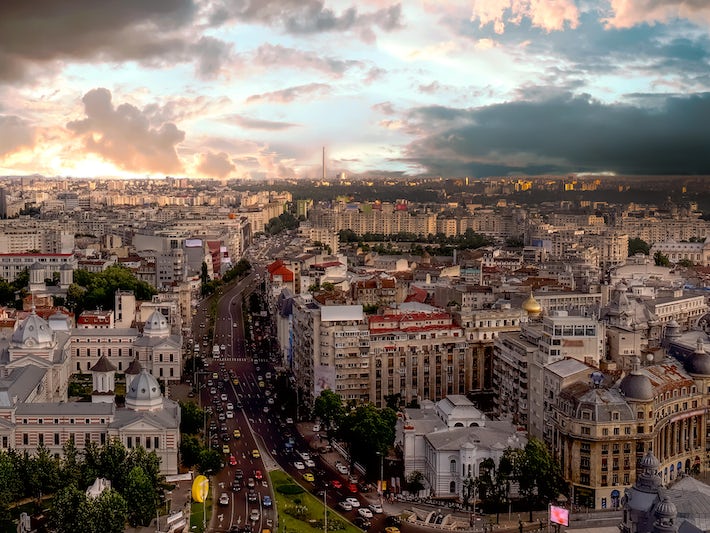 Find Things to Do in Bucharest on Viator

Popular Things to Do in Bucharest

Food and Drink in Bucharest

Romanians joke that when vegetarians ask a waiter for meat-free menu options, they're told: "No problem. We have lamb." This is a country that loves its meats: pork stuffed with ham and cheese; beef stuffed with mushrooms, bacon, peppers and a tomato puree; and mititei, small, skinless grilled sausages made of minced pork, lamb, beef and spices.

Romanians also love soup. A national favorite is the hearty ciorba, a sour soup made from fermented bran, vegetables, parsley, dill and beef or chicken. It's usually served with a bit of sour cream and green or pickled pepper. For the experimental diner, there is ciorba de burta, a tripe soup made with sour cream, vinegar and garlic sauce. (It's good.)

Popular desserts include pastries, usually with a cheese filling. And, by all means, sample Romanian wines. This wine-producing nation is known for its reds and dry and demi-sec whites.

A modest lunch, with wine or beer, costs about 30 lei. The tip is rarely included, except sometimes in large groups. The recommended tip is 5 to 10 percent, depending on the quality of the service.

Beloved by both locals and tourists, Caru'cu bere is a gorgeous restaurant with stained glass and wood carvings that dates back to 1879. Menu favorites include squash stuffed with minced meat; Romanian pork shank served with pan-fried sauerkraut, polenta, horseradish and chili pepper; grilled trout; and grilled mutton sausages. Caru'cu bere means "a beer wagon," and the huge menu includes a number of home-brewed beers. The restaurant is nicely located in the historic Lipscani district, one block from Stavropoleos Church. (Str. Stavropoleos 5. Open from 8 a.m. to midnight.)

For an elegant dining experience, Balthazar on Embassy Row is regarded as one of Bucharest's classiest restaurants. Located in a lovely old villa, it showcases fusion cuisine with a French-Asian flair that will not remind you of ciorba or mititei. Selections include five-spice tuna, beef tournedos, Peking duck blinis, crabmeat tartar and cod salad with wasabi and mango vinaigrette. There is also a sushi menu. (Dumbrava Rosie 2. Opens daily at 12:30 p.m.)

Located just around the corner from the Arch of Triumph, L'esperance is a small family business with a robust menu of Romanian specialties. You can't go wrong with the sampler plate: caviar in quail eggs, foie gras, fried pressed cheese, mititei and grilled pork, veal and lamb. There is also a nice selection of Romanian wines. A favorite of local families and business people alike, L'esperance is the real deal. (Str. Clucerului 86. Opens daily at noon.)

If you're interested in a quick bite, try a kebab shop. Considered better and fresher alternatives to traditional fast-food outlets, the eateries feature grilled chicken or beef with Romanian (by way of Turkey, a one-time occupier of the nation) spices, sauces and garlic. Sides include salads, grilled veggies and Turkish yogurt. Shaorma Dristor, with multiple locations, is a popular choice. Look for its Dristor kebap signs.

A visit to Bucharest would not be complete without a look at the Communist landmarks that make up much of the city's visual signature. Not only do the sites represent a difficult part of history that ended with the 1989 revolution, but the monuments are interesting architecturally. ("Anything that looks weird was built by the Communists," our guide told us. He was right.) Among the sites that mark Ceausescu's 25-year dictatorship: the former Central Committee of the Communist Party building on Revolution Plaza, the scene of Ceausescu's last speech and, across from it, a brick and glass building that headquartered the secret police; the large white obelisk shooting through a symbolic black cloud, a monument known locally as the "impaled potato," which celebrates freedom from Communism; and the Palace of Parliament, one of the largest buildings in the world. Parliament, Ceausescu's greatest folly, has more than 1,000 rooms, an enormous nuclear bunker and a 328-foot-long lobby. It took 20,000 workers and 700 architects to build. Palace of Parliament is located on B-dul Unirii, a boulevard modeled after the Champs-Elysees. Revolution Plaza is roughly nine blocks north of Parliament.

A counterpoint to the Communist landmarks is the lovely Lipscani district, the historical heart of Bucharest. The old city center, now being refashioned into an upscale neighborhood, is a mishmash of architectural styles, from Baroque to neo-Classical to Art Nouveau. This jumble of cobblestone streets and pedestrian walkways houses art galleries, antique shops and coffeehouses. It is also home to the stunning Stavropoleos Church. Built in 1724, this small architectural gem is a mixture of Romanian and Byzantine styles with a beautiful facade, frescoes and wood-painted icons. Many consider it to be Bucharest's finest church.

Bucharest has many museums, but far and away, the two local favorites are the National Village Museum (Sos Kiseleff 28-30), an open-air collection of peasant homesteads transported from across rural Romania, and the Museum of the Romanian Peasant (Sos Kiseleff 3), which houses 18th- and 19th-century collections of weavings, handicrafts, pottery and other folk arts. The latter was named European Museum of the Year in 1996. The museums are closed on Mondays. Another museum, underrated but quite wonderful, is the Museum of Art Collections. Founded in 1978, the museum contains private collections confiscated by the Communists and later recovered. (Note: Some promotional literature about the museum says the art was "donated to the state." Don't believe it!) The artworks -- traditional glass, Transylvanian icons, 19th-century French furniture and works by Romanian masters -- mirror the development of Romanian art in the 19th and 20th centuries and hint at how the nation's avant-garde once lived. The museum, headquartered in a neo-Classical building at Calea Victoriei 111, has sketchy hours, so it's advisable to call first (021-211-1749).

The Arch of Triumph, based on the Arc de Triomphe in Paris, is an important city landmark that honors the bravery of Romanian soldiers who fought in World War I. Originally built of wood in 1922, the 85-foot-high arch was finished in granite in 1936. The monument is located on Sos Kiseleff, the same street that houses the National Village Museum and Museum of the Romanian Peasant just a few blocks away. Kiseleff itself is notable because it showcases Bucharest's finest villas, occupied today by diplomats and political parties, among others. During the Communist era, it was reserved strictly for Communist party officials. At the moment, it serves as the street address of the U.S. Ambassador to Romania.

Herastrau Park, considered by many to be Bucharest's nicest park, stretches along a manmade lake, and it's a great place to stroll, bike or boat. With a photo ID, you can rent a bike for free. There are open-air cafes, restaurants and nice spots to relax and live like the locals for awhile.

The Dracula legend originated in Romania, and to experience it locally, check out lovely Snagov, a weekend retreat for Bucharestians just 25 miles north of the city. There's a lowland forest, a lake and, notably, an island in the lake that features a 15th-century church that is home to Vlad Tepes' tomb. Tepes was the brutal prince who inspired novelist Bram Stoker's "Dracula." Rowboats, often manned by priests, are available to take visitors to the small stone church. For do-it-yourselfers, there are buses and a shuttle service that travel to Snagov; the concierge at your hotel can fill you in. There are also guided tours.