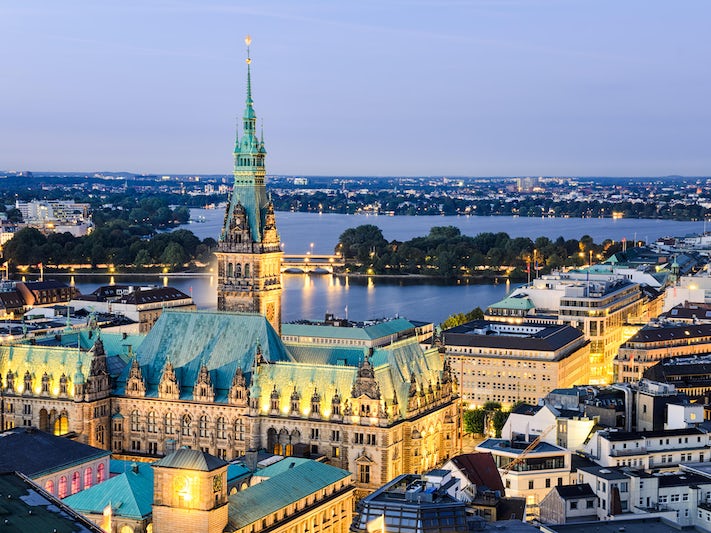 Find Things to Do in Hamburg on Viator

Popular Things to Do in Hamburg

Food and Drink in Hamburg

The pontoon walkways and promenades on the Elbe River waterfront are Hamburg's main draws, and lunch spots facing the harbor are numerous. The majority of cafes and restaurants feature local seafood (Atlantic cod, plaice, mackerel, sole, whiting, crab, lobster and shrimp) from the nearby North Sea and typical German-style sausages like weisswurst (white veal or port sausages), bratwurst (smoked pork sausages) and knockwurst or knackwurst (pork and beef spiced with garlic), all served with sauerkraut. Just in from Langdungsbrucken is a lively district of Iberian (Portuguese and Spanish) restaurants with sidewalk dining in the warmer months. In general, Hamburg is a truly international city with most international cuisines represented.

For casual dining along the Elbe River waterfront, try Nordsee for fish and chips and prepared boxes of sushi. You can choose to sit at the counter or at tables outside. (Landungsbrucken, Brucke 1, open daily until late.)

For the most delicious French-German infusion in a bistro atmosphere, try Restaurant Cox (www.restaurant-cox.de, Greifswalder Strasse in the St. George neighborhood), which is open for lunch and dinner.

Messmer Momentum is a stylish tea lounge that serves a full English-style afternoon tea, including scones and clotted cream, crustless sandwiches, delectable pastries, jams and jellies. The tables have views out to the canal, and a tea museum and tea shop are attached. (Am Kaiserkai 10. U-Bahn Baumwall. Open 11 a.m. to 8 p.m. daily; seminars are offered from 5 p.m. to 6:30 p.m. every Thursday.)

Fleetschlosschen, located in a historic building that was once a pilot station, is positioned opposite the maritime museum and offers Middle Eastern fare. Seating is both indoors and outdoors, and lunchtime specialties are wraps of Arab-style bread with salad, ham or tuna, and feta or mozzarella cheese with an herbal cream base. (Brooktorkai 17. Open daily for lunch and dinner.)

Churrascaria O Frango is one of a score of Portuguese-Spanish restaurants in a tight neighborhood along Ditmar Koel-Strasse and side streets just in from Landungsbrucken. The menu runs from tapas to paellas to grilled meats in wine sauces. Tables at this tucked-away, small corner restaurant are located inside and out on the sidewalk; sit outside in the summer for a more lively atmosphere. (Reimarustrasse 17. Open noon to 11 p.m. Tuesday through Sunday.)

Harbor & Alster Cruises: Scenic cruises are popular in Hamburg, and visitors can choose between cruises around the harbor and on the Alster Lake. Rainer Abicht Elbreederei GMBH offers one-hour harbor tours with English commentary at noon daily. The route includes the Elbe and connecting canals, with views of shipyards and major city sights. Tours depart from Landungsbrucken, bridge 1 landing (S-Bahn/U-Bahn Landungsbrucken). Alsterdampfschiffahrt E.V. operates the historic steamship St. Georg (built in 1876) on 45-minutes cruises of the Binnenalster and Aussenalster and the narrow waterways that connect the two to the canal system. The sights of the city surround you, and the lakeside Japanese cherry blossoms are a riot of color in May. (S-Bahn/U-Bahn Jungfernsteig. Cruises depart daily from 10:45 a.m. to 5:45 p.m.)

Elbphilharmonie: A project that took nine years and 900 million euros to complete, Hamburg's philharmonic center is impossible to miss in HafenCity. Its crown-shaped glass top towers above the city skyline, reflecting sunlight from its wavy windows. The building is photo-worthy from the outside; inside, it's even more spectacular. You'll be blown away from the moment you step in and see Europe's longest escalator, which moves along passengers through a stark-white climb into the building. The panoramic deck, which wraps the Elbphilharmonie, is bustling, but you get unparalleled city and river views. Take your time and work all the way around. Concerts of all sorts take place at the Elbphilharmonie, world-renowned for its impressive acoustics. Access to the panoramic deck is free, though you do need tickets to secure your spot. (It's capacity controlled.) If you would like a tour of the concert halls, your best bet is booking a guided tour through an excursion operator, who will walk you through the building, its history and architecture. (Platz der Deutschen Einheit. Open for tours from 9 a.m. to 11:30 p.m. daily.)

St. Michaelis Church: This church was built from 1751 to 1762 in a high Baroque style. Besides touring the interior and vaulted crypt, you can climb a soaring spiral staircase to the viewing tower for a city, river and lake panorama. (Englische Planke 1a. S-Bahn Stadthausbrucke, U-Bahn Baumwall. Open 9 a.m. to 7:30 p.m.)

Miniatur Wunderland: The largest model railway layout in the world is spread over two floors with sections devoted to Hamburg and its port, Germany's Harz Mountains, Scandinavia, Switzerland and the United States. Scale models, apart from 800 trains winding through the landscape, include 10,000 cars, trucks and buses; numerous ships, roads and buildings; 200,000 miniature figures and varied scenery and spots of activity, such as a ship docking and firefighters attacking a blaze at city hall. The settings go through day and night cycles. (Kehrweider 2-4. U-Bahn Baumwall or Messberg. Open daily from at least 9:30 a.m. to 6 p.m.; hours extend during summer and holidays.)

Rathaus: The Neo-Renaissance City Hall, built between 1886 and 1897, houses some 647 rooms with varying decorative styles and serves as the administrative center for the State of Hamburg. English language tours begin hourly at 10:15 a.m. It also houses a Rathauswienkeller (city hall wine cellar), which is open to the public. The square out front is used for civic events and festivals. (U-Bahn Rathaus. Open 8 a.m. to 6 p.m.)

Old Elbe Tunnel: Built between 1907 and 1911 for cars and pedestrians, the Old Elbe Tunnel connects Hamburg St. Pauli with Steinwerder on the opposite bank by taking you under the river. It is a worthwhile outing on foot, especially if not taking the harbor tour, as there is a great view of Hamburg's skyline from the far side. Pedestrians have free access at all hours. Elevators or stairs take you to the tunnel level then up again on the other side. The pedestrian footpath runs alongside the two single-lane vehicular tunnels (approximately 1,400 feet). (S-Bahn and U-Bahn Landungsbrucken.)

BallinStadt (Ballin City): This museum traces -- with English and German captions -- the route from the mid-19th century, which an estimated 5 million emigrants took from the port of Hamburg by sea to new lives in North and South America and Australia. The museum is built on the Veddel Island site where the emigration halls used to be. Exhibits include photographs, artifacts, ship models and passenger list records of the people who passed through there. Anyone with a German or Eastern European background will find the visit more than worthwhile. A harbor launch brings visitors directly from the cruise port at St. Pauli Landungsbrucken to Veddel. (Veddeler Bogen 2. S-Bahn Veddel - Ballinstadt. Hours change seasonally, but it's open daily beginning at 10 a.m.)

Reeperbahn: If you are a night owl in town pre- or post-cruise, take the S-Bahn to the Reeperbahn station in St. Pauli for a mile-long strip of nightclubs, dance halls, restaurants and bars. Once a sinful playground for sailors and merchant seamen, the district is open to everyone who likes to party into the wee hours. The whole area is undergoing gentrification, with hip venues and housing opening all the time. Theater (musicals are best for non-German speakers) and, during the day, art galleries and museums have entered the mix to soften its former reputation as the red-light district. It's also a fun spot for people-watching, especially when the sun goes down.

Blankenese: This Elbe River town is a bedroom suburb for Hamburg, offering considerable charm and wonderful views of the widening Elbe from its high banks. Most of the well-kept houses are turn-of-the-last-century, colorful and accented with tidy gardens. The S-Bahn takes about 30 minutes (Bus 48 a little longer) and boasts some good river views on the approach to Blankenese. From the station, the 15-minute walk takes you past art galleries and clothing shops on the way down to the river's promenade. There, cafes attract sightseers who enjoy watching the constant river traffic of barges, tugs, container vessels and ferries. For a dining treat, try the two-Michelin-rated Seven Seas restaurant at the Hotel Sullberg, which offers great river views and classic French gourmet cuisine. A water taxi is an alternate way to get there from Landungsbrucken. Bike tours also offer scenic rides through Blankenese.