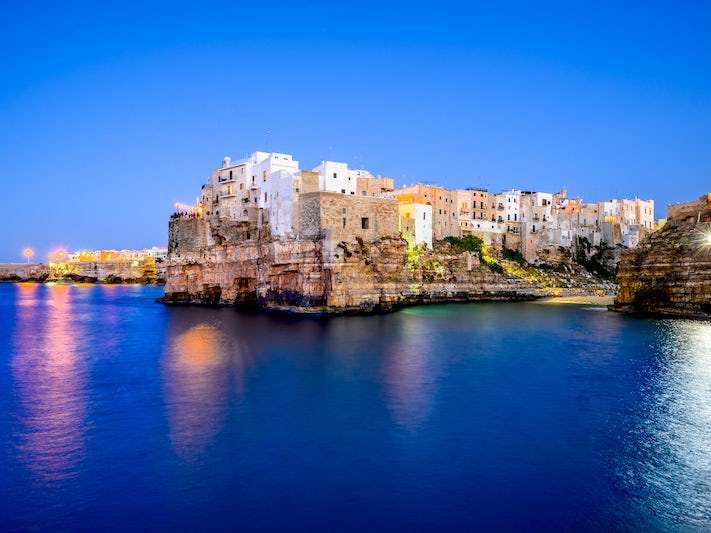 Find Things to Do in Bari on Viator

Popular Things to Do in Bari

Food and Drink in Bari

Bari's cuisine is one of the most traditional and delicious in Italy, and it's based on the three main agricultural products of the Puglia region -- wheat, olive oil and wine -- supplemented by locally produced fruit, vegetables and meat.

It's a foodie's paradise; look out for that glorious traditional pasta (particularly the hat-shaped orecchiette), and tuck into pungent baked calzone, made from local flour and filled with onions, anchovies, capers and olives. Dip focaccia alla Barese into thick minestrone soup, or enjoy a ragu of lamb, pork or (if you're feeling brave) horsemeat.

And, if you're feeling even braver, try the catch of the day served tartare. (Yes, that means raw.) Or, enjoy a traditional, oven-baked Riso -- composed of rice, potatoes and mussels -- washed down with some of the delicious local wines, such as Primitivo.

You'll find good places to eat in both the Old Town and the new. Corso Vittorio Emanuele, the broad main street that divides Bari's Old Town from its 19th-century area, is the best place to head if you fancy a traditional Italian lunch ashore. The central, pedestrian area is shaded by palm trees, and it's a good place to browse for a nice lunch venue, as you'll find plenty of enticing restaurants with pretty, glass conservatory-style frontages.

Best for a Sophisticated Meal: Ristorante Alberosole (in Corso Vittorio Emanuele II, near Piazza Ferrarese) is noted for its sophisticated twist on traditional Bari dishes. With its monastery-style vaulted roof and stone-flagged floor, it's also an atmospheric place in which to dine. House specialities include a crescent-shaped pasta dish, spiced up with mint, anchovies and pine nuts; orrechietti (ear-shaped) pasta with bacon; and locally caught squid, stewed in red wine.

Best for an Inexpensive Lunch: Caffe' Borghese (130 Corso Vittorio Emanuele) is a good bet for an affordable meal. Order a drink, and you'll get a few nibbles thrown in for free, while the filled panini and bruschetta -- substantial hunks of bread topped with tomatoes and garlic -- come highly recommended. And, you can either eat in the elegant brasserie-style interior, or sit outside and watch the world go by.

Much of Bari's New Town actually dates from the early 19th century, but it's laid out on a grid system, so it's easier to find your way around there than in the jumble of narrow streets and alleyways you'll find in the Old Town. The New Town is also the best place to find sophisticated shops and department stores selling good-quality clothes, ceramics and giftware. The broad and beautiful Corso Vittorio Emanuele -- which divides the Old Town from the New -- is well worth strolling along. It's lined with offices on one side, but on the other you'll find charming, early 19th-century buildings in shades of pale cream, chocolate brown and burnt orange, their black wrought-iron balconies vivid with tumbling scarlet geraniums and lavish purple bougainvillea.

A walk around the Old Town is simply magical, for this is a real old town, and the working people of Bari still live there and give it all the charm of an authentic community. While there's not a lot of cash about, there is an old-fashioned feeling of friendliness and mutual cooperation, with children playing on the streets as the women watch and talk.

Take a look around the Old Town food market, fragrant, colorful and bursting with local goodies. It's just off the square on the left of the cathedral. You'll find some fabulous food shops -- like the Panicceria Animaria bakery, which sells delicate, pastel-tinted macaroons, pancerotto (diced ham tarts) and zhuccacio (savory pastries), and heart-shaped apricot and almond biscotti -- in the same area. The Antica Salumeria, a lovely old grocery shop a few doors down from the bakery, is fragrant as only Italian shops can be, with scents of freshly baked panini, herbs, pungently spiced sausages and local cheeses and hams. Be warned, though: As you walk through the door, a hog's head hanging on the wall may startle you!

Two of Bari's most notable churches -- the 11th-century Basilica of St. Nicola (which has a magnificent painted ceiling and a gold-encrusted crypt containing the Saint's remains) and the 12th-century Cathedral of San Sabino -- are both based in the Old Town. The same area is home to tiny convents, chapels and shrines founded by ancient communities in Bari; they include the Church of San Marco, founded by the Venetians, and the Chieso del Santa Maria del Carmine, founded by the Carmelites in 1542. The latter is worth seeing for its elegant Wedgewood, blue Baroque-style, gold and gilt interior; inlaid marble altar and glittering crystal chandelier.

The Norman-Swabian Castle lies on Piazza Federico II di Svevia, just outside the Old City walls, facing the sea. Built between 1233 and 1240 by Frederick II, it has angular towers that were added in the 16th century. Nowadays, it's occupied by a government department, but tourists can go inside for a small fee and visit its plaster-cast gallery, which features ornamental casts of Italian buildings, created between the 11th and 17th centuries. Hours are 8:30 a.m. to 7:30 p.m. Tuesday to Sunday.

The pretty beach resort of Trani is located about 30 km from Bari. (A taxi will cost approximately 80 euros, roundtrip.) It's a sleepy place with an attractive waterfront and oodles of old-fashioned charm; one fan described it as looking like a 1950's film set. It's a great place to come to relax and watch the boats in the harbor. The only other attraction would be a visit to its 12th-century Cattedrale di San Nicola Pellegrino.

Explore the atmospheric ruins of an ancient Roman city at Canosa di Puglia, 50 km from Bari. (A taxi, plus waiting time, will cost between 100 and 120 euros.) Canosa is considered the archaeological capital of Puglia and is one of Italy's oldest continually inhabited cities, believed to date from the 7th century B.C. Worth seeing are ancient catacombs dating from the 4th to the 2nd century B.C. Editor's note: Canosa is a fair distance from the port, so consider a visit only if you have a long time ashore.

Monopoli, a picturesque former Venetian trading post 40 km away, is endowed with a spectacular central piazza that's surrounded by shops, bars and restaurants. It's perfect for enjoying a lazy lunch and watching the world go by. A cab ride will cost about 100 euros.

Alberobello, the Trulli capital of Puglia, lies halfway between Bari and Brindisi and is well worth visiting, as its fairytale looks have won it the status of a UNESCO World Heritage Site. The conical Trulli houses are now mainly hotels, holiday apartments or souvenir shops, but you can see an example of how one would have looked -- complete with traditional Trulli furniture -- in the Trulli Museum, near Alberobello's cathedral. A taxi ride there costs about 200 euros, roundtrip.