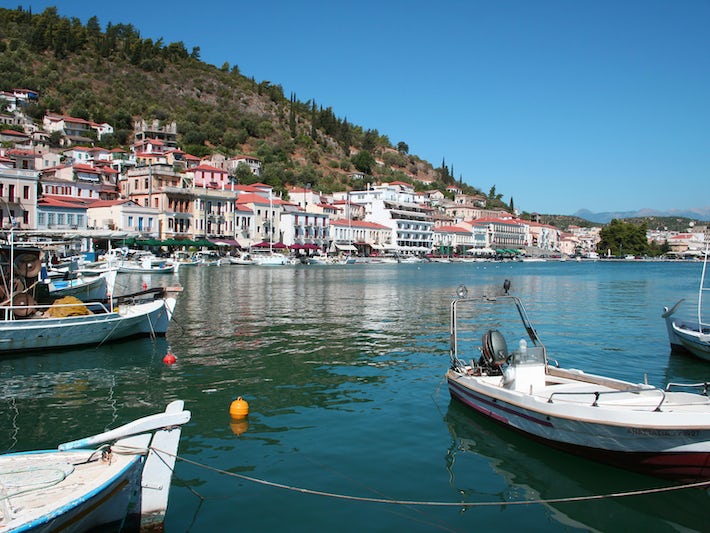 Find Things to Do in Gythion on Viator

Popular Things to Do in Gythion

Food and Drink in Gythion

Decide to lunch in Gythion, and you'll be spoiled for choice; the seafront is lined with dining tables. The best way to find a lunch venue is simply to stroll about, check out some menus, and see what takes your fancy. While the local restaurants obviously major in that day's catch and deliciously crispy calamari, they also serve Greek classics like moussaka (aubergine, lamb and cheese bake), kleftiko (slowly braised lamb) and baklava (a sweet dessert made from phyllo pastry, spiced honey and nuts) -- washed down, of course, with pungent, thick Greek coffee.

Best lunch with a view: Right on the harbor, overlooking the fishing boats one way and the sea wall the other, Navrinia serves up crisply battered calamari (squid rings); fried shrimp; Greek salads, enhanced with tasty tomatoes, olives and Feta cheese; and, of course, the local catch of the day. You'll spot it as you walk round the marina; look out for the washing lines hung with the unfortunate victims of that morning's trawl for squid.

Best long-established eatery: The Saga Akpoiadi fish restaurant, which was founded in 1961, has a good name locally and lies on the coast road that runs left from the harbor to Cranae's causeway. It's also good for a sea view over to Cranae and its lighthouse.

Best meze-style snacky meal: The little restaurant attached to La Boheme Hotel, also on the coast road, offers snacky little goodies like cheese and spinach pasties, zucchini balls, grilled feta, shrimp soup and salted pork from Mani for about 2.50 to 3 euros a portion. Like most restaurants in Gythion, it has tables set right next to the sea. Locals in the know also recommend the Ouzerie Korali in Gythion's main square (Platia Githeiou) for a shot of the famous Greek falling-down water and tasty mezedes (bite-sized Greek snacks similar to Spanish tapas).

Legend has it that the tiny island of Cranae was the island on which Paris spent his first night with Helen of Troy. With its 19th-century lighthouse; pine-scented, gecko-haunted woodland; whitewashed, red-roofed chapel; and stunning views of the sea, it certainly has an air of romance -- in spite of the two comically scruffy but very tame ducks who greet you on arrival. To get there, walk left from the marina, around the bay and across the causeway.

Gythion has some beaches within walking distance -- or a short taxi ride -- from the tender drop-off. The largest beach in the area is Mavrovouni, which lies near a village of the same name, around two kilometres south of Gythion. It's a pebbly beach, so if you're looking for sandier terrain, try Selinitsa Beach. It's even closer to the port, about one kilometer away.

If you're interested in history, look out for the ancient amphitheater that lies 200 meters along the coast road from the main square (head right from the harbor). It's not madly exciting -- just the usual semicircle of stone seats, but part of an ancient Agora was discovered close by. More details of excavations and the history of the Mani region are contained in the Gythion Historical and Ethnological Museum, which is housed in the Tzanetakis Tower on Cranae (open Monday through Saturday, 9 a.m. to 5 p.m.).

Sparta lies about half an hour's drive from Gythion, on a broad plain beneath Laconia's Taigetos Peaks. Appropriately enough for a city once famed for its military might and the toughness of its fighting men, there is a large army base nearby -- but the modern city itself shows few signs of its illustrious past. Sparta's Archaeological Museum (a pretty, neo-Classical building at 71 Osiou Nikonos St., tel: 30 27310 28575) does contain bas-reliefs, mosaics and statues from the 6th and 4th centuries B.C. There's not all that much to see there, but real ancient history buffs may get a thrill out of standing on the same soil as the ancient city-state.

Mystras, the 13th-century Byzantine citadel set atop a steep hill about six kilometers from Sparta, is a much better bet for lovers of history, atmosphere and spectacular architecture. Built by the Franks in 1249, it fell into the hands of the Byzantines only a decade later and was transformed into the fabulous city that ruled the Peloponnese for the next two centuries and was home to the last dynasty of Byzantine emperors. Captured in the 15th century by the Turks and later the Venetians and abandoned in 1832, it is now a UNESCO World Heritage Site, famous for its stunning hilltop castle and Byzantine churches.

The Caves of Diros, enormous underground caverns, lie halfway down the western coast of the Mani Peninsula and extend inland for at least five kilometers and (some believe) as far as Sparta. Discovered in the mid-20th century after being blocked for years by effects from an earthquake, the three caves -- Glyphada, Alepotripa and Kataphyggi -- are among the most spectacular in the world and are famed for their immense stalagmites and stalactites. The Diros Neolithic Museum lies near the entrance of the caves and exhibits Neolithic remains found in them. (Open every day except Monday, from 8:30 a.m. to 3 p.m.)