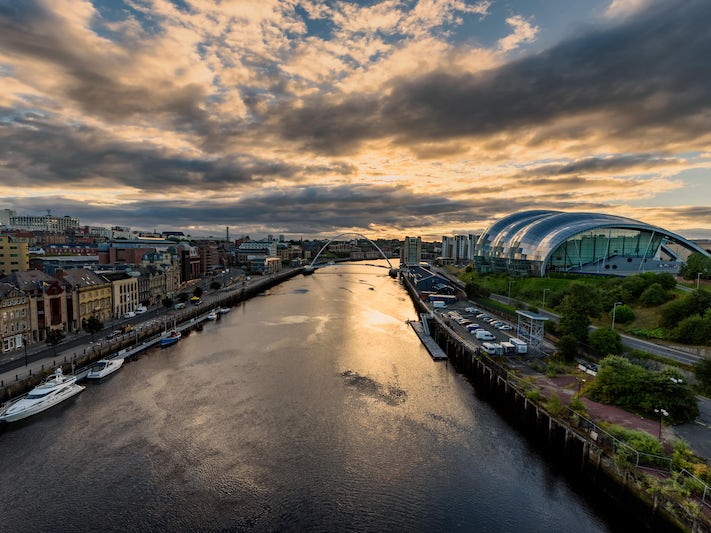 Find Things to Do in England on Viator

Popular Things to Do in England

Food and Drink in England

Because of Newcastle's temperamental climate, local fare tends toward hot, wholesome and filling food. Try minced beef with mashed potato, bangers and mash, or fish and chips (best enjoyed with lashings of malt vinegar) for an authentic regional treat. If in town on a Sunday, try the traditional Sunday roast, consisting of either beef, lamb or pork served with mashed potato, several types of vegetables and the world-famous Yorkshire pudding.

The Herb Garden: One of Newcastle's hidden gems, this quirky restaurant can be found just a short walk from Central Station. They specialize in stone-baked pizzas, Italian salads and sharing plates. All the restaurant's herbs are grown in their very own herb garden and they offer daily specials that include steaks, pitas, burgers and more. A private dining experience for groups of up to 14 is available every day, but must be pre-arranged. (Arch 8 Westgate Road; 0191 222 0491; Monday to Sunday, 11:30 a.m. to close)

Sachins: This is one of the city's finest Punjabi Indian restaurants and is an absolute must if you are a fan of spicy food. Family-owned, Sachins serves creative dishes that are all prepared using the freshest and finest ingredients. It is a small restaurant, so be sure to make a booking in advance of your visit. Otherwise, you can just turn up and wait. (Forth Banks; 0191 261 9035; Monday to Saturday, noon to 1:30 p.m. and then 5:45 to 11 p.m.; closed Sunday)

Pani's Cafe: This is a good choice for noshing with the natives of Newcastle, with a varied menu running from hot toasties (toasted sandwiches with a variety of fillings) to a sit-down lunch such as the char-grilled lamb with white wine sauce and mint. The cafe offers reasonable prices in a very homely setting to provide an enjoyable all-around experience. (61-69 High Bridge St.; 0191 232 4366; Monday through Saturday, 10 a.m. to 10 p.m.; closed Sunday)

Blackfriars Restaurant: This restaurant claims to be the oldest dining venue in the entire country, having served up food continuously since 1239. The original building was a hostel run by monks, and was once host to King Henry III. Set in a horseshoe-shaped nest of buildings, the highlight is a beautiful medieval courtyard used for alfresco dining during the summer months. (Friars Street; 0191 261 5945; Monday to Saturday, noon to 2:30 p.m. and then 5:30 to 10 p.m.; lunch only on a Sunday from noon to 4 p.m.)

Centre for Life: Opened by the Queen in 2000, and currently hosting around 200,000 visitors a year, the Centre for Life features numerous rotating exhibitions and a permanent display based on diverse aspects of human life, including its ability to adapt and survive across a range of environments. The theater also hosts live science demonstrations allied to the main exhibition theme of the time, while the integral Newcastle Fertility Centre is recognized as one of the world's leading centers for stem cell research. The center is located next to Central Station and frames an open square full of cafes, bars and restaurants. (Times Square, NE1 4EP; 0191 243 8210; Monday to Saturday 10 a.m. to 6 p.m.; Sunday 11 a.m. to 6 p.m.)

Tyne Bridge: Almost a perfect echo for its famous cousin in Sydney Harbour, the Tyne Bridge remains the perennial, defining landmark of the Newcastle skyline. It is best viewed from down on the Quayside. Originally commissioned in 1925, the 591-foot-long bridge was inaugurated three years later by King George V. The four massive towers on either side of the bridge, built from Cornish granite, were originally intended for use as massive, five-story warehouses. The graceful, curving arch of the bridge stands some 59 meters above the water, and is coated in green paint. This is both a traffic and pedestrian bridge, and the views from its main span along the Quayside are simply stunning.

Sage Gateshead Music Centre: Standing across the River Tyne on the Gateshead side of the city, the Sage opened to considerable acclaim in 2004. This is essentially three buildings morphed into one, and the venue has five bars and an on-site brasserie. The glass shell-back facade was designed by Norman Foster, and the use of curving glass in receding sizes makes it a stunning visual statement. It often houses performances by artists as varied as Van Morrison and Herbie Hancock. The Sage is located at St. Mary's Square, Gateshead. (St. Mary's Square, Gateshead Quays, NE8 2JR; 0191 443 4666; open daily from 9 a.m. closing times vary)

Hancock Great North Museum: Newcastle's premier showcase for historic artifacts. It has a large planetarium with LED displays of the heavens, as well as a large-scale, interactive model of Hadrian's Wall as it originally appeared. The museum also features several animal and mammal displays, including an elephant and great white shark, as well as a full-sized skeleton of a T-Rex. (Barras Bridge NE2 4PT; 0191 208 6765; open Monday to Friday, 10 a.m. to 5 p.m., Sundays 2 to 5 p.m.)

Segedunum: This incredible archaeological site marks the eastern end of the 73-mile-long Roman Wall, which was constructed right across England by Emperor Hadrian as a defense against Scottish raiders. The display comprises the excavated fort, baths and museum complex that has now been declared a UNESCO World Heritage Site. It features displays of Roman artifacts and re-enactments of military life, which can be observed from a 35-meter-high viewing tower. It is just a short taxi journey from the port. (Buddle Street NE28 6HR; 0191 278 4217; open 10 a.m. to 5 p.m. all week, including Sundays during summer)

Grey Street: One of the city's most famous streets, this fabulous thoroughfare, lined by Georgian architecture that dates predominantly from the 1830s, runs from the base of the imposing Grey's Monument down toward the River Tyne and onto the bustling Quayside.

St. James' Park: For sports fans, this is the home of Newcastle United, and currently the sixth-largest football stadium in the United Kingdom. If the city has a true cathedral for the devout, this is it. (Barrack Road, NE1 4ST; 0844 372 1892; call for stadium tour info or match tickets)

The Quayside: This bustling waterfront promenade extends across both the Newcastle and Gateshead banks of the River Tyne. The Newcastle side has many bars, shops and chic bistros in a fabulous setting spanned by a series of vaulting bridges, all overlooked by the iconic Tyne Bridge itself. Within eyesight and easy reach are the already mentioned Sage and the famous BALTIC Centre for Contemporary Art. Evenings find the waterfront alive with strollers, street performers and mime artists. If you hit at the right time of year, you might even see a spectacular firework display framed by the mighty Tyne Bridge itself.

Durham City: Located within an hour of Newcastle, Durham boasts an amazing setting on a bend on the River Wear. The cityscape is dominated by the massive, brooding Norman castle and cathedral, erected in 1072 as defenses against marauding bands of Picts. Today the city has many winding, cobbled lanes leading to ancient squares full of quirky arts and craft shops, and a broad, meandering river that makes for beautiful walks along either bank. The city also boats the third oldest university in the United Kingdom and some fine old timbered buildings dating back to the 15th century. The river is traversed by a series of old stone bridges updated from the same period, and the city center is pedestrian only. All of this makes Durham a wonderful place to stroll and savor. To get to Durham, simply take the Metro from Percy Main (just a short walk from the cruise terminal) to Central Station. Here you can board a fast train directly to Durham, the journey time of which is roughly 14 minutes. Alternatively, you can take a taxi to Durham directly from the port but it will be expensive.

Alnwick: Roughly 35 minutes north of Newcastle by train, Alnwick boasts a splendid castle with sumptuously restored formal gardens. This is the residence of the Earl of Northumberland. The castle is better known to many as the fictional Hogwarts from the Harry Potter films. The region is close to the Northumberland coast and has some fabulous beaches, though the winds can be harsh. There is also the White Swan Hotel, which contains much of the original first-class wood paneling from RMS Olympic, the twin sister of the ill-fated Titanic. The two ships were essentially identical, and the restored artifacts in the hotel include large parts of the original smoking room, complete with leaded glass windows, and part of the original Grand Staircase as featured in the 1998 film. Take the Metro from Percy Main to Central Station and then board a train for Alnwick. Taxis are available, but they can be costly unless you are sharing. Some taxi drivers will offer a flat day rate.

Angel of the North: This is certainly a sight that will prove irresistible for art lovers. Anthony Gormley's controversial vision opened to mixed local reviews in 1998, but has gone on to transcend these to become almost as great a Tyneside icon as the Tyne Bridge itself. It stands 20 meters tall on a hill outside a village of Low Fell, while its wingspan of 54 meters seems to embrace all who stand near it. Again, you can take a taxi but, as an alternative, you might pick up the Angel Bus from Eldon Square Mall, in the center of Newcastle. Run by the local company Go North East, the bus numbers for this service are number 21 and 22. You simply turn up and buy a ticket onboard. The easiest way to get to the Eldon Square Mall is via Metro from Percy Main to Haymarket. From Haymarket, the bus terminal is just a 2-minute walk.