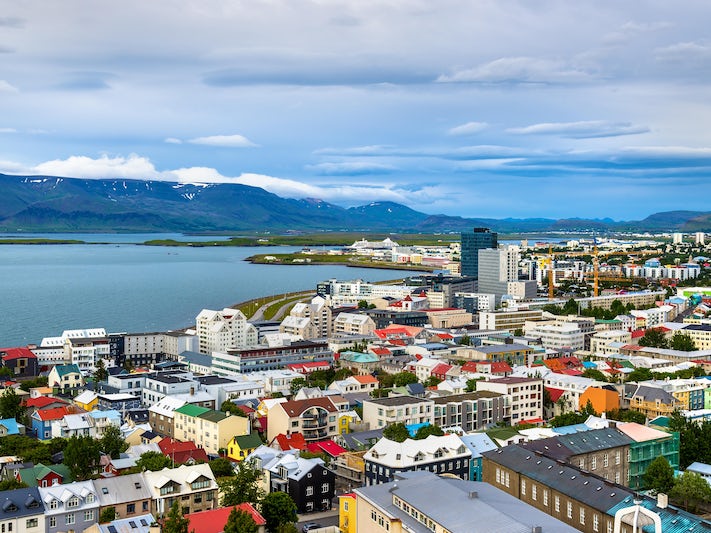 Popular Things to Do in Reykjavik

Reykjavik is Iceland's capital city and home to more than half of the entire country's population -- there are fewer than 200,000 total residents. This tiny city has turned into an increasingly popular cruise destination, especially during the summer months -- from May to August -- when there is nearly 24 hours of daylight. Reykjavik has a relaxed and cozy vibe, and cruisers can enjoy more active pursuits like walking, biking and golfing excursions or exploring any one of the many seaside shops, bars and eateries. Reykjavik is also home to a number of eccentric museums and unique street murals that art-lovers are sure to appreciate.

Summer in Reykjavik is warm and temperate, but if you're going on a northern lights cruise, you should expect chilly and sometimes frigid temperatures, with snow possible from as early as September. Though the northern lights do appear from September through April, the best viewing is said to be between February and March and again between September and October. Iceland has its own language, which can seem indecipherable to non-native speakers, but English is widely spoken in Reykjavik. Currency is the krona, with ATMs offering the best exchange rates.

Find Things to Do in Reykjavik on Viator

Food and Drink in Reykjavik

Reykjavik is known as a foodie destination -- and rightly so. From gourmet food to simple meals, the city has something for every taste and budget. Seafood and smoked lamb are the stars of Icelandic menus. Fish is off-the-boat fresh. Cod is the most popular choice, though haddock, Arctic char, halibut, salmon and monkfish are also common. Locally raised lamb has been allowed to range freely and feed on grasses, herbs and bushes that have never known chemicals, giving the meat a distinctive flavor, which slightly resembles that of wild game. Don't be surprised to see whale, puffin and even horse on the menu. Other Icelandic traditions include skyr, which tastes like sweetened yogurt, and a delicious rye bread called rugbraud or hverabraud. Note: Even though your bill may include a space for tipping, it is not customary in Iceland to do so as service is already included.

Matur og Drykkur: This kitschy restaurant in the Saga Museum in the Old Harbour district has reimagined traditional Icelandic cuisine with a modern twist that features the freshest fish, the leanest lamb and aromatic herbs. There's a terrific Icelandic sampler that includes dried double smoked lamb; fish chips with sweet whey butter and seaweed; salted cod croquettes; and sheep's dung smoked arctic char. Other favorites are the halibut soup with mussels, apples and dried fruit and the hot dog "with everything" and lovage potato salad. Lunch reservations are recommended. (Grandagarour 2; +354-571-8877; 11:30 a.m. to 3 p.m. and 6 to 10:30 p.m., daily.)

Vegamot: One of the city's hottest nighttime venues is a perfect stop for an affordable lunch. Vegamot, conveniently set on a little street between Laugavegur and Skolavordustigur (the two main shopping streets), is a buzzing bar and club at night. But, it's also a great stop by day, when you'll find salads, sandwiches and gourmet pizzas, as well as fresh fish and tapas. On sunny days, the outside garden is packed. (Vegamotastig 4; +354-511-3040; open weekdays and Saturdays at 11 a.m. and at noon on Sundays and keeps kicking through the wee hours.)

Coocoo's Nest: Green eggs and ham? A mimosa made with beet, orange or apple juice? Vegan menu options? Talk about menu choices to please just about anyone. This handsome family-owned restaurant is located in what was once a fisherman's storage shed, just across the street from the Reykjavik Maritime Museum. A deli-style menu with salads, soups and sandwiches is available Tuesday through Thursday with a robust brunch on offer Friday, Saturday and Sunday. There is limited outdoor seating. (Grandagarour 23; +354-552 5454; Tuesday through Saturday, 11 a.m. to 10 p.m.; Sunday, 11 a.m. to 4 p.m.; closed Mondays.)

The Old Town: A couple of hours on foot in the old part of the city allows you to experience its unique spirit, the busy harbor, colorful houses, whimsical murals and sculptures, and interesting architecture, old and new. Start at the main tourist office on Reykjavik's oldest street at Adalstraeti 2, where you can pick up free printed walking guides. The points of interest are easy to find, roughly between the Old Harbour and the town pond (Tjornin on the map).

Along Tryggvagata, the street beside the harbor, at Posthusstraeti, an enormous mosaic depicts the city's maritime life. Keep strolling to see plaques with photos of old sailing ships, one of the old steam locomotives used to build a harbor railroad and the ultramodern concert hall rising above the harbor. Head south toward the pond on almost any street, and you'll be in the oldest part of town, passing brightly colored buildings with tin roofs. You never know where you'll encounter an intriguing small gallery, a humorous sculpture or mural. Around the pond are the modernistic City Hall on stilts and the 1881 classic stone Parliament.

If your schedule allows, you can take advantage of the guided, 90-minute walking tours sponsored by Goecco Outdoor Adventures, with guaranteed departures from May 15 to September 15 at 1 p.m. daily, departing from the Elding Whale Watching stand, located on the Old Harbour. Another free walking tour option departs twice a day from Laekjartorg Square at noon and 2 p.m. Led by university students, the one-hour tour visits the Althing Parliament, Hallgrimskirkja Church, Harpa concert hall and more. In both cases, all it will cost you is a tip for the guide.

Hallgrimskirkja Church: Not everyone admires the odd stair-step architecture, but there's no missing this unusual church, named after Icelandic poet Hallgrimur Petursson. Iceland's largest church, seating more than 1,000, sits at the top of a hill at the end of the shopping street Skolavordustigur. Take the elevator to the tower, which literally towers over the town, for great city views. The concrete form was designed by former state architect Gudjon Samuelsson and was supposedly inspired by volcanic basalt rock formations. On the grounds is a statue of Norwegian-born Leif Ericson, the Viking said to have discovered America 500 years before Columbus. It was a gift from the United States in 1930 on the 1,000th anniversary of the world's oldest Parliament, Iceland's Althing. On some days during the summer months, you may be able to catch a concert at Hallgrimskirkja (usually at noon). (Hallgrimstorg 1; 9 a.m. to 5 p.m. October through May and 9 a.m. to 9 p.m. June to September. Sunday service takes place at 11 a.m.)

Reykjavik Art Museum: If art is your pleasure, head to the Reykjavik Art Museum, but there's a catch: The museum is divided into three different locations. The most convenient is Hafnarhus (Tryggvagata 17; +354-411-6400; 10 a.m. to 5 p.m.), the contemporary art museum, housed in a former warehouse across the street from the Old Harbour. A special gallery there is devoted to the large, comic book-style paintings donated by the Iceland-born artist Erro. (Hafnarhus is open 10 a.m. to 5 p.m. daily, with extended hours until 8 p.m. on Thursdays.) The other two sites are short cab rides from the cruise dock or town center. Kjarvalsstadir (in Miklatun Park) is the oldest and largest, housing paintings and sculpture by well-established artists. (Flokagata 24; +354-411-6420; 10 a.m. to 5 p.m. daily.) The Asmundur Sveinsson Sculpture Museum and Park resides in a striking, contemporary, domed building and is named for the sculptor who designed the edifice and whose work is featured inside. (Sigtun; +354-411-6430; May 1 to September 30, 10 a.m. to 5 p.m. daily. There's a fee, but you can walk around the sculpture garden for free.)

Harpa Concert Hall: Located on the waterfront, this striking building, made of colored glass, opened in 2011 and is home to the Iceland Symphony Orchestra and Icelandic Opera. It is designed to look like a glacier and at night it is lit up like the Northern Lights. It hosts a variety of concerts, international conferences, trade shows and more. Two restaurants are onsite, as are two shops, one of which features a selection of Icelandic music. There are guided 45-minute tours four times a day for a fee. (Austurbakki 2; +354-528-5000; open daily from 8 a.m. to midnight.)

Reykjavik 871+/-2 Settlement Museum: This underground museum was inspired by the discovery in 2001 of the remains of a Viking-age longhouse. The museum uses stunning interactive displays, models and artifacts to bring the story of the city's earliest settlers to life. Tours can be scheduled with English-language guides. (Adalstraeti 16; +354-411-6370; open daily at 9 a.m. or 10 a.m., depending on the season, and closes at 5 p.m.)

Shopping: Laugavegur and intersecting Skolavordustigur, the main shopping streets, are well worth strolling even if you don't plan on buying anything. The shops display not only the traditional Nordic sweaters but also the modern design that is an increasing influence in Reykjavik. As you browse, don't forget to look toward the water at cross streets for striking views and murals in unexpected places.

Iceland's Golden Circle: These tours offer a chance to explore the island's raw and rugged interior. The trio of sites includes the Strokkur geyser, where jets spout anywhere from 60 to 100 feet; the mystically beautiful Gullfoss (or Golden) falls, Europe's largest waterfall, tumbling into a glacial river with a 105-foot double cascade; and Thingvellir, a scenic national park that marks where Europe's first Parliament, the Althing, was formed in 930 AD. Your best bet is to book a tour, whether through your cruise line or via an independent company like Tours By Locals. One of the best ways to tour the interior is in an off-road vehicle that crosses unbridged rivers to get to the more remote locations.

The Blue Lagoon: Located about 40 minutes from downtown, the Blue Lagoon is one of Iceland's most popular destinations. Steaming, mineral-rich hot water from far beneath the earth forms this spectacular man-made lagoon, amid a rugged lava landscape. A health spa also offers mudpacks and massages. The lagoon's geothermal water is believed to be beneficial for everything from skin problems to arthritis. Keep in mind that, while the Blue Lagoon is well worth a visit, you probably won't have time to enjoy the hot waters and explore the city of Reykjavik. (Grindavik 240; +354-420-8800; open daily from 9 a.m. to 9 p.m. June, July and August and from 10 a.m. to 8 p.m. September through May.)

Thermal Pools: Reykjavik is famous for its steamy geothermal swimming pools, fed by underground springs. The biggest and best-known is the Laugardalslaug with both indoor and outdoor pools, plus "hot pots" and a thermal steam bath for those who really like it hot. Take a cab or the #14 bus. The pool is part of Laugardalur, the city's largest park, where you can easily spend a rewarding day. The park includes botanic gardens -- showing off local plant life and great displays of seasonal flowers -- as well as the city zoo. Editor's Note: In order to keep the pools clean, all visitors to any of Reykjavik's thermal pools must wash thoroughly with soap (and without a swimsuit) before getting in. (Sundlaugavegur 30a; +354-411-5100; Monday through Friday, 6:30 a.m. to 10 p.m.; Saturday and Sunday, 8 a.m. to 10 p.m.)

Arbaer Open-Air Museum: Operated by Reykjavik City Museum, Arbaer Open-Air Folk Museum is a period farm turned into an open-air museum with more than 20 buildings forming a town square, a village and a farm. Most of the buildings have been relocated from central Reykjavik. Craftspeople demonstrate traditional farm-life crafts and chores. Although it's located in a suburb of Reykjavik, the museum is easily accessible. Take bus #19 from Hlemmer, the main bus station on Laugavegur, and ask to get off at Strengur, a quick walk from the museum. (Kistuhylur, 110 Reykjavik; +354-411 6300; Open daily from 10 a.m. to 5 p.m. June, July and August. September through May, the museum opens at 1 p.m. for guided tours only.)

Puffin Tours: Boat tours take visitors past Puffin Island, where thousands of these adorable birds are found in mating season. Puffin Express has tours to the islands of Akurey and Lundey, from May 1 to August 20, using small boats that bring you close to shore. Check kisoks at the Old Harbour for details.