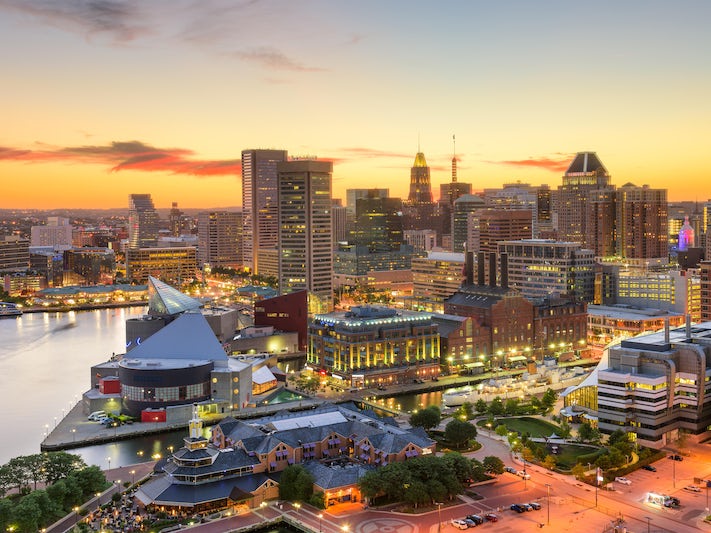 Find Things to Do in Baltimore on Viator

Popular Things to Do in Baltimore

Food and Drink in Baltimore

You'll find just about every cuisine from fast food to food trucks to fine dining, along with family saloons downtown, at the Inner Harbor and in the neighborhoods. Note: Chesapeake Bay blue crabs are seasonal (basically Memorial Day through October). You can find crabs all year, but they may be from the Carolinas or the Gulf of Mexico. You want crabs that are "fat" and have a dirty-looking belly. A white underside means it's a new shell and it won't be full of meat.

At Fell's Point: Arguably the best all-around destination for foodies, it provides visitors with lots of tough decisions to make. The Point in Fells has crab dishes, bar food and outdoor dining when weather permits. (1738 Thames Street; 410-327-7264; open 10 a.m. to 5 p.m. Tuesday to Sunday)

Dalesio's of Little Italy has lots of lunch choices, from marinara or pesto with your gnocchi or veal, chicken or penne parmesan. The eatery features what it calls an "eclectic wine list." (829 Eastern Avenue; 410-539-1965; opens 11:30 a.m. to 9 p.m. Monday to Saturday)

Inside the centuries-old Lexington Market (since 1782), J.W. Faidley cooks up some of the city's best fried crab cakes. For adventurous eaters, the market has stall after stall of regional foods, plus picnic tables scattered around the huge hall. (400 W. Lexington Street; 410-837-6325; open 9:30 a.m. to 5:30 p.m. Monday to Saturday)

Baltimore has plenty of places with exotic and classic cocktails, some Orioles- or Ravens-themed drinks, and a fine wine selection, but it's really a beer town. Several craft breweries have opened, but the nostalgic favorite is Natty Boh's (really National Bohemian beer); while it's not brewed in Baltimore anymore, it's still the "hometown" beer.

Inner Harbor: You can spend an entire day here. A good central place to start is Harborplace and the Gallery, a waterfront complex connected by a public plaza that hosts street performers and concerts on weekends.

Historic Ships in Baltimore: Visitors can test their sea legs and maritime knowledge aboard ancient nautical history. They include the 1854 war frigate USS Constellation(flagship of the U.S. African Squadron 1859-1861) at Pier 1; the lightship LC116 Chesapeakeand the submarine USS Torsk(over 10,000 dives) at Pier 3; the Coast Guard cutter USCGC Taney(the last surviving warship of the December 7, 1941, Pearl Harbor attack)and the Seven Foot Knoll Lighthouse (oldest surviving "screwpile" lighthouse of the Chesapeake Bay) at Pier 5. Let them know whether you (or a relative or someone you know) have a personal connection to one of these ships. (301 E. Pratt Street; 410-539-1797)

National Aquarium: To the east of Harborplace, this world-class aquarium features exhibits showcasing blacktip sharks, large rays, sharks and spooky jellyfish, as well as a Dolphin Discovery display (where visitors can interact with marine mammal experts about dolphin life and care). Sitting atop everything is a rain forest. The interesting part of this aquarium is the tanks wrap around the visitors and walkway instead of the other way around. (501 E. Pratt Street; 410-576-3800).

Maryland Science Center: With jaw-dropping exhibits about dinosaurs (full-sized dinos) and other scientific explorations, an IMAX theater and planetarium, the complex is located to the south of Harborplace. (601 Light Street; 410-685-2370)

Oriole Park at Camden Yards: When it's time to play ball, take in a game. Opened in 1993, it was the first "retro" baseball park made to look like the good-ole days. Between innings, savor the aroma and taste of Boog's BBQ, Dempsey's Brew Pub and Restaurant and Stuggy's (crab mac-n-cheese dog). Sample such hometown treats as Berger cookies (vanilla wafers coated in chocolate ganache) and bratwurst cooked in Natty Boh, the local brew. For an inside look, take a 90-minute tour ($6) of the stadium to see the Orioles' dugout, club level suite, press level, scoreboard/Jumbotron control room and tributes to Frank Robinson, Brooks Robinson, Earl Weaver, Cal Ripken Jr., Jim Palmer and Eddie Murray. (333 W. Camden Street; 410-547-6234)

More Sports Attractions: To complete a triple play of sports attractions, stop by the Babe Ruth Birthplace and Museum (216 Emory Street; 410-727-1539) and the Sports Legend Museum, where exhibits cover baseball, football, college teams and soccer (301 W. Camden Street; 410-727-1539). While you're in the neighborhood, get a pop culture and toy fix at Geppi's Entertainment Museum (upstairs at the Sports Legend Museum; 410-625-7060).

Canton: This former blue-collar neighborhood, about two miles east of downtown, which abuts Fell's Point, showcases row houses, marble stoops and a waterfront park with a Korean War memorial. Much of the action centers on O'Donnell Square and the repurposed Can Company, a repository of restaurants and shops.

Harbor East: Wedged between Fell's Point and the Inner Harbor, this neighborhood had its own renaissance. Dilapidated warehouses from the early 1900s have been filled with posh shops and restaurants. Leisure takes all forms here, from jogging on wide sidewalks and window-shopping at upscale boutiques to eating up the burgeoning foodie scene. Try the smoked crab cakes at Pierpoint (1822 Aliceanna Street; 410-675-2080) or the Mediterranean tapas at Pazo (1425 Aliceanna Street; 410-534-7296).

Mount Vernon: Baltimore's cultural heart beats here. Less than a mile north of the Inner Harbor, the neighborhood is home to the Joseph Meyerhoff Symphony Hall and the Peabody Institute of the Johns Hopkins University, a music conservatory. The Walters Art Museum's (600 N. Charles Street; 410-547-9000) diverse holdings span 55 centuries. Museum highlights include Egyptian sarcophagi, Faberge eggs, Monet paintings and an impressive body of works from the European Old Masters, including Raphael and El Greco. With luck, you'll be there when they have a tour or workshop. Note: There's no admission fee for the Walters, although there are fees for special programs.

Baltimore Museum of Art: Another free major attraction is this museum, with its famed collection of 19th century, modern and contemporary art that includes the largest collection of works by Henri Matisse. Two landscaped sculpture gardens lure you when it's time to rest your feet, and John Shield's restaurant Gertrude's inspires your tasting palate as much as the art satisfies your cultural palate. (Three miles north of the Inner Harbor, 10 Art Museum Drive; 443-573-1700)

Fort McHenry National Monument and Historic Shrine: The Fort commemorates the events of September 13 and 14, 1814, in the War of 1812's Battle of Baltimore. The indomitable spirit of the defending troops inspired Francis Scott Key to write the poetic words that became America's national anthem. Detained aboard a British ship, the attorney witnessed the foreign power's fierce 25-hour bombardment of Fort McHenry. In the morning's pale light, he was relieved to find "that our flag was still there" at the battered fort. In March 2011, the Fort McHenry National Monument and Historic Shrine unveiled its new Visitor and Education Center, an $11 million facility timed for the bicentennial of the War of 1812. At select times in the summer, the park organizes living history programs. (2400 E. Fort Avenue; 410-962-4290)

Federal Hill: Tucked behind the Maryland Science Center, this is another delightful historic neighborhood of refurbished row houses, some adorned with unique marble steps. It's a great destination for dining and bar-hopping; don't miss the charming Cross Street Market (1065 S. Charles Street; 410-685-6169), a more modest and less frenzied version of Lexington Market. Federal Hill Park (300 Warren Avenue) on the south side of the Inner Harbor was once used as a military lookout post during the Civil War and the War of 1812. It now has benches so visitors can enjoy amazing views and photo ops of the Inner Harbor.

Flag House: To complement your Fort McHenry tour, stop by the home of Mary Young Pickersgill, a prominent flag maker. This is where Pickersgill, her daughter, two nieces and an African-American indentured servant constructed the huge flag. No, Betsy Ross did not make the Fort McHenry flag. What remains of the original flag is housed at the Smithsonian Institution's National Museum of American History on the National Mall in Washington, D.C. A new flag was made for the bicentennial celebration of Fort McHenry, and many local individuals added a stitch or two in its construction. Self-guided and docent tours (Wednesday, Thursday and Saturday on the hour) are available. (844 E. Pratt Street; 410-837-1793)

B&O Railroad Museum: Considered the oldest and most comprehensive collection of American railroad history, the museum has locomotives, rolling stock and representations of every day railroad life, including clocks, pocket watches, fabrics, lamps and examples of the fine china and silverware used in dining cars. (901 W. Pratt Street; 410-752-2490)

Annapolis: If you've already seen and done all of Baltimore, head 45 minutes southeast to the enchanting city of Annapolis, the self-proclaimed sailing and boating capital (you'll need a car to make the trip). The Chesapeake Bay destination is steeped in Colonial history and maritime attractions. The Maryland State House, whose construction began in 1772 and spanned 25 years, is the country's oldest state capitol in continuous operation (State Circle; 410-946-5400). The U.S. Naval Academy (410-293-8687), established in 1845, offers public walking tours, starting from the Armel-Leftwich Visitor Center, inside Gate 1 at the Annapolis harbor. One popular stop is the chapel, which features elaborate stained-glass windows, including one designed by Tiffany, and the crypt of naval hero John Paul Jones. Often overlooked (there's so much to see) is the U.S Naval Academy Museum (Preble Hall, 118 Maryland Avenue; 410-293-2108), with two floors of exhibits about the role of the Academy in producing officers who led the nation's sea power and the Navy.

Annapolis contains two main sections: the city, where you'll find the Naval Academy and the politics, and Eastport, across Spa Creek, where you typically find the sailors. Different restaurants, shops and people in each location. In either case, the architecture tells the history of the city, with Eastport being where construction workers who built the Naval Academy lived and where the condos are going now.

For a history-in-a-nutshell tour led by Colonial-attired guides, check with Annapolis Tours by Watermark for its "Four Centuries Walking Tour." The company also offers a ghost walk and a boat cruise. (410-268-7601)