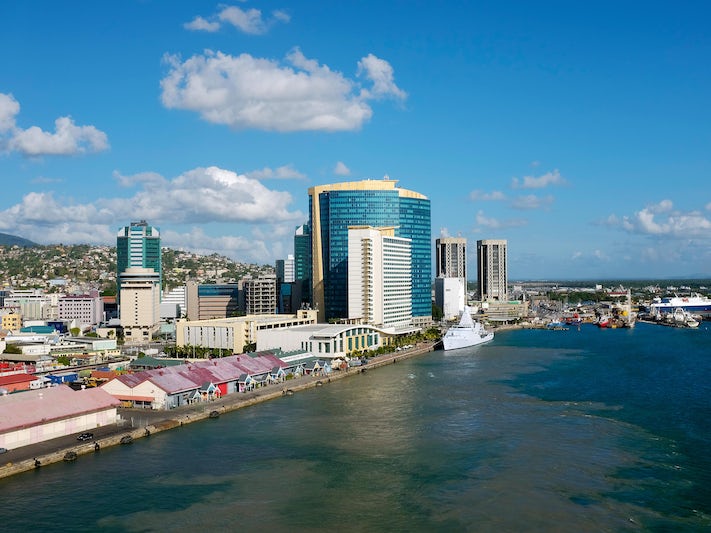 Find Things to Do in Trinidad on Viator

Popular Things to Do in Trinidad

Food and Drink in Trinidad

You can find a selection of casual dining options in the malls on Frederick Street, as well a wide variety of cuisines on Ariapita Street and around the Queen's Park Savannah.

Situated right on the waterfront, the Breakfast Shed (Wrightson Road) is a five-minute walk from the cruise terminal. The food-court-style restaurant specializes in Creole food. You can sip local cocoa and coffee while you enjoy the view.

For some of the best roti in the Port of Spain area, head to Shiann (3 Cipriani Blvd.). Decide whether you want your curry wrapped in the roti or the roti on the side, pick a flavor of curry (beef, chicken, chickpeas with potato), and then add hot sauce and sides. It's not high frills, but it's truly Trinidadian and definitely delicious.

For true North Indian cuisine, as opposed to the local version, Apsara (13 Queen's Park East, 868-627-7364) will offer you plenty of choices with its extensive menu (great for vegetarians). The colorful restaurant is divided into several rooms, with brightly colored walls and chairs, tasseled quilts hanging from the ceiling and depictions of Indian gods and goddesses. It's right across from the Queen's Park Savannah. If you'd prefer Thai food, Tamnak Thai shares the same building.

Port of Spain's Restaurant Row can be found on Ariapita Street, a quick cab ride or easy walk from the cruise port (from the waterfront Hyatt, take Colville Street until it intersects with Ariapita). Try Veni Mange (#67A) for local food (callaloo soup, West Indian hot pot) and plenty of veggie-friendly fare, or Irie Bites (#71) for Jamaican jerk cuisine and a laid-back vibe. El Pecos on the Grill (#68) is a carnivore's paradise of grilled meats.

The ultimate beach lunch is a Bake & Shark sandwich at Maracas Bay (try Richard's for the popular pick or Asha's for the most choices). The menus are fairly limited but center on the Bake & Shark sandwich -- grilled shark meat on fried bread, which you top with your choice of sauces, veggies and fixin's. It's best when washed down with a cold local beer, like Carib or Stag. Some venues, like Asha's, offer a choice of proteins that include chicken, shrimp, cheese, kingfish, salmon and flying fish -- all on frybread.

If you're spending the day at the Asa Wright Nature Centre (Blanchisseuse Road, 868-667-5162), you can eat lunch at its buffet restaurant, which includes a choice of meat or fish, vegetable sides, salads and desserts. Sunday lunch is a special menu with soup, local foods and its signature pie. You must make reservations in advance for lunch, which costs $140TT ($200TT on Sundays) and is served from noon to 1 p.m.

Any drink made with locally produced Angostura bitters or rum is worth a taste.

Tobago is better known than Trinidad for its beaches, and most beaches on Trinidad are far away and not convenient for cruise travelers to visit in a one-day stop. However, Maracas Bay is only an hour's drive from the cruise port and is actually quite a beautiful Caribbean beach that's well worth a visit. This popular spot has clean, white sand, lots of palm trees, waves for jumping, and a plethora of Bake & Shark stands for a local lunch. Changing stations and bathrooms are available for a small fee, so be sure to bring some local currency.

Queen's Park Savannah and the Magnificent Seven: The Queen's Park Savannah, once a sugar cane plantation and now a public recreation area, occupies 260 acres of land and is surrounded by a road, affectionately dubbed the longest roundabout in the world. Locals come here to walk, jog, play football or cricket, and watch outdoor concerts. Around the park lie the Magnificent Seven, seven turn-of-the-20th-century grand mansions, most of which have fallen into disrepair (though plans are in the works to start refurbishing them). Also by the savannah are restaurants, the botanical garden, a zoo, and the new National Academy for the Performing Arts, which just opened in November 2009 and has a modern design, reminiscent of the Sydney Opera House.

Royal Botanical Gardens: The Royal Botanical Gardens, located just north of the Queen's Park Savannah, houses one of the oldest collections of exotic trees and plants in the world. It's a great place for a pretty walk or picnic outdoors. Admission is free. (It's open 6 a.m. to 6 p.m. daily.)

Asa Wright Nature Center: Bird-watchers flock to this 1,500-acre nature preserve to catch a glimpse of some of Trinidad's 425 bird species, including colorful toucans and parrots. Located about an hour from the port, the Asa Wright Nature Center offers guided nature walks, a restaurant, a hotel and a gift shop. The land, formerly a coffee-cocoa-citrus plantation, is now covered with rainforest and caves and is home to birds, bats, butterflies, lizards, iguanas, armadillos and agouti. You'll need to a full day there to properly explore the grounds. (It's open daily from 9 a.m. to 5 p.m., and guided walks are offered at 10:30 and 1:30.)

Fort George: For a view over Port of Spain and the harbor, drive up to Fort George, set on a peak more than 1,000 feet above the city. It was built in 1804 as a defensive site and was later turned into a signal station for ships. Visitors today can see original cannons and some of the dungeons. Admission is free. (It's open 10 a.m. to 6 p.m.)

Emperor Valley Zoo: Animal-lovers and families can have a great day out at Trinidad's zoo , located adjacent to the Royal Botanical Gardens and across from the Queen's Park Savannah. The zoo houses hundreds of local and foreign birds, mammals, reptiles and fish, including monkeys, tigers, crocodiles and flamingoes. There's a cafeteria on-site and plenty of places for picnicking. (It's open daily, 9 a.m. to 6 p.m.)

National Museum and Art Gallery: The diverse exhibitions at Trinidad's main museum include displays on early Amerindian history, the technology of the oil industry, Carnival, steel pan music and the island's geology, flora and fauna. Admission is free. (It's open Tuesday through Saturday from 10 a.m. to 6 p.m. and Sunday from 2 to 6 p.m. It's located at 117 Frederick Street.)

Caroni Bird Swamp: The 20-square-mile mangrove wetland that makes up the Caroni Bird Swamp is home to more than 200 species of birds. The big-name attraction there is the Scarlet Ibis, a bright red bird that's the national bird of Trinidad, even gracing the country's coat of arms. Visitors take tours through the waterways on motorized canoes and may see snakes, anteaters, caimans and a wide variety of birds. The best time to visit is at dusk, when the scarlet Ibises come home to nest for the night, but most cruise travelers visit in the morning, when bird viewings are possible but not as plentiful. It's a half-hour drive from Port of Spain.

Hiking: Trinidad's mountain ranges and rainforests make for great hiking, with opportunities to see birds and wildlife, explore caves and swim in natural pools by waterfalls. Short day-hikes are within driving distance of Port of Spain, but you'd do best to hire a guide for the best experience within a limited port call. Try The Pathmaster, Caribbean Discovery Tours or Banwari Experience.