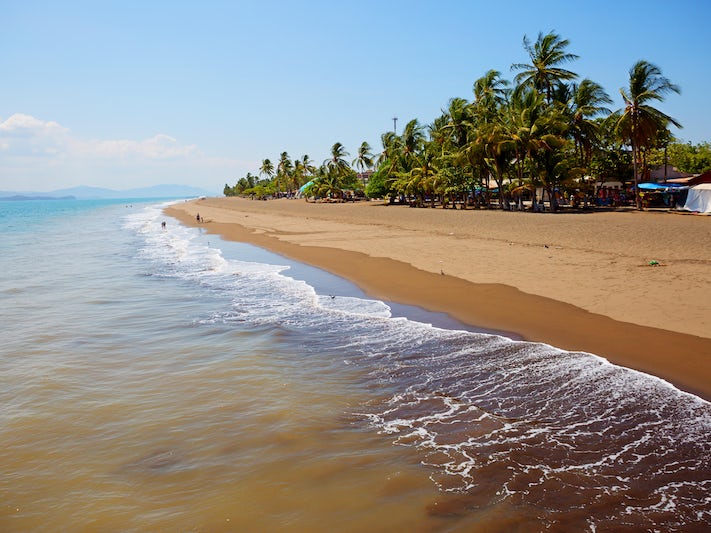 Find Things to Do in Puntarenas (Puerto Caldera) on Viator

Popular Things to Do in Puntarenas (Puerto Caldera)

Grabbing a bite to eat in Puntarenas is easy -- there's a string of open-air food counters, called sodas, as you walk along the Paseo de los Turistas. They offer ample seating on wooden benches, shaded by overhangs. Sandwiches, such as cheese (queso) and ham and cheese (jamon con queso), start from about $2 -- or 1000 colones; the vendors will take U.S. currency. Not surprisingly, as this is a seaport, fried fish and ceviche (citrus-marinated seafood salads) are also staple items at the sodas.

Zip-lining. Canopy tours -- during which travelers glide among the treetops attached to a series of suspended cables -- are all the rage throughout the Caribbean and Central and South America. However, we'd argue that there's no better place to experience this adventure, best known as zip-lining, than in the lush rainforests of Costa Rica, where the concept originated. There are several companies that offer canopy tours, and cruise lines offer zip-lining as a ship-sponsored excursion here.

Monteverde Cloud Forest. You've heard of the rainforest, but what's a cloud forest? Also called a fog forest, a cloud forest is a moist tropical or subtropical rainforest that occurs high in the mountains. At Monteverde in Costa Rica, the varied climate and altitude promote high biodiversity of mammals and plants; it's also a particular hot-spot for birders.

Poas Volcano National Park. Poas is an active volcano that has spewed forth lava, ash and gases from three craters over thousands of years -- though two are now dormant. (One contains a lake.) The main crater is a 15-minute walk from the visitor's center and is almost a mile in diameter -- one of the world's largest active craters. The park is open from 8 a.m. until 3:30 p.m. daily, and there are marked hiking trails. Editors Note: The Park closed in 2017 due to eruptions and has no named open date.

Carara National Park. This biological reserve sits between the dry forests to the north and the rainier ones to the south, bordering the crocodile-filled Tarcoles River. (Carara reportedly means river of crocodiles.) Carara is one of the most likely places in the country to spot scarlet macaws. Other inhabitants include monkeys, sloths and armadillos. The park is open from 7 a.m. until 4 p.m. daily, and there are marked walking trails for guests.

San Jose. Costa Rica's modern capital city, San Jose, is set high in the mountains and is a viable day trip. A few things to consider, though: First, it's a long drive -- two hours each way -- so we recommend booking your cruise line's tour rather than going it alone, say, by taxi; you don't want to get stuck in traffic and miss the ship. Also, the city is gritty and does not reflect the best of what Costa Rica has to offer, which, again, is eco-diversity and active adventures. However, if you've already gotten your fill of hiking, boating, kayaking and so on -- or if you simply miss city life by the time you call there -- the sights (particularly the landmark, neo-classical National Theater) are worth seeing.

Editor's note: Orchids cannot be brought back to the United States, due to agricultural regulations.

Sarchi. A scenic, 40-minute drive from Puntarenas in the Central Valley of Costa Rica is Sarchi, an arts and crafts paradise. It's a great option for picking up unique souvenirs, such as woodcrafts and leather goods. Sarchi is a focal point in Costa Rica's farming and artisanal history. Look for the brightly painted oxcarts, or carretas, once used to carry goods to Sarchi from nearby port towns like Puntarenas.